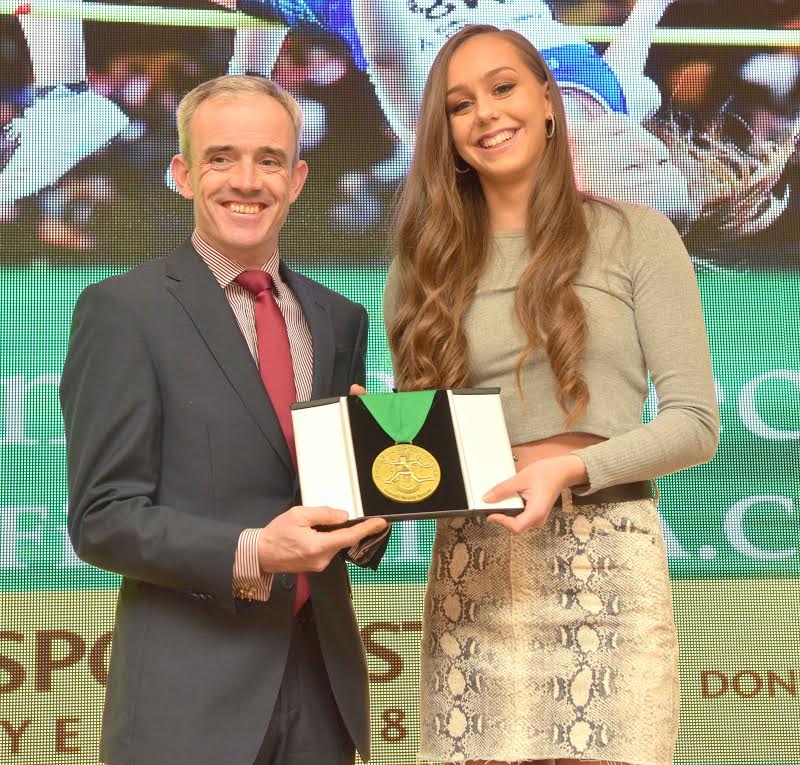 The Finn Valley AC High Jumper was speaking ahead of the 2019 Awards which take place on Friday week the 31st of January in the Mount Errigal Hotel.

“It was a great feeling to hear my name being called out at the awards function that night,” Lecky said.

“To be the judged the best sports person in the county against all the others who were on the shortlist was just amazing. Standing up there in front of so many people at the end of the night was a really good feeling.”

This year there are 180 nominations in a total of 38 categories which includes nine for schools.

Lecky is one of the nominees again this year in the athletics category which she has won for the last two years.

She said: “It’s great to see so many sports getting rewarded. It was an unbelievable event the last time. The room was packed and whole thing was so really well organised.

When I seen that Mark English had the win overall award twice, it really brought it home to me how lucky I was to be to getting that piece of crystal from Ruby Walsh.”

Sommer scooped the top honour after her 1.90m leap saw her take a High Jump silver medal at the IAAF World U20 Championships in Helsinki, Finland in July 2018.

She was the first individual Irish medal winner at the games since 1994. Lecky also took part in the Commonwealth Games in Australia in 2018. She finished fifth at the European Athletics Championships last summer.

Lecky is now preparing for the National Indoor Championship Finals next month and will be aiming to reach the qualifying standards for both the World Indoor Finals in China in March and the August European Track & Field Championships in Paris.

Chairperson Grace Boyle is asking those planning to go to the Mount Errigal on Friday 31st to order their tickets this week to give the organisers plenty of time to do the table plans and fine tune the arrangements for the 44th Awards which are being sponsored once again by Donegal County Council.

“It’s under two weeks now to our Awards night so to be sure of your place, it would be advisable to book as soon as possible this week,” Ms Boyle said.

“There’s a lot of work for the committee to do yet. Trying to accommodate guests at their preferred tables would be greatly helped by ordering their tickets now.

“We have been finalising the category winners and working with Terry McEniff at the Mount Errigal to get all the arrangements right for the biggest social sporting event in the County. Donegal County Council has been very good to us once again and their support is very much appreciated by the Committee.

“We have been averaging around 600 guests in recent years and the full house signs have been up a week before the function on a regular basis” Ms Boyle concluded.”