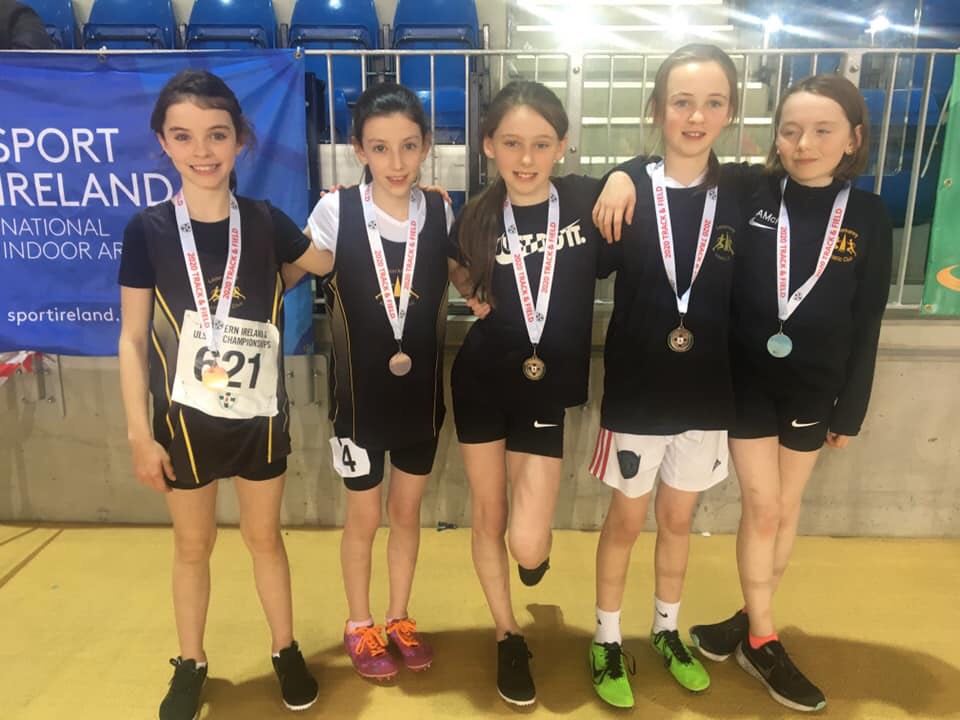 LAC juveniles secured their best medal haul over the weekend pocketing an impressive 20 individuals, including 2 Ulster titles and four relay team winners at the NI Ulster Indoor Track and Field Championship in Abbottstown.

First event of the day was the 60m Hurdles. Ryan Canning was proof that solid consistent training really does pay off taking his spot on the podium, four times on Saturday.

Ryan set the marker in the combined U18 /19 60m hurdles keeping a relentless pace from start to finish in taking the Gold and Ulster Champion Title.

Next event later in day for Ryan was the U18 200m, which was a straight final. Ryan battled it out for the top spot on the podium , unfortunately just missed out by 0.3 of a second taking home a silver medal.

Ryan was joined on the podium by his teammate Joseph Aidoo who ran a strong race to take home the bronze.

Joseph also took to the podium later in the day after winning Bronze in U19 60m.

Ryan also ran the U18 400m and was 2nd in his heat in a time of 55 seconds, qualifying for finals displaying a fine performance to take the podium once again with a bronze medal.

Elvis Okoh and Athan Doherty both made it to the finals of 60m, with Elvis putting in an impressive race in 7.59  to take Gold and the Ulster title, Athan following closely within seconds taking bronze. Athan also won bronze in the U16 long jump, whilst Elvis took fourth, with qualification for All-Irelands.

The U12 Girls and Boys competed in a number of events displayed determination and talent. Anya Dufy and Maeve Doherty both made it to the finals of the 60m sprints with Maeve finishing fourth overall and qualifying for All-Irelands. Anya just missed on qualifying by seconds finishing 5th position.

Both Anya and Maeve along with Sophie McLaughlin, Aoife McFadden and Emer Cassidy all ran well in the 600m race, which warmed them up well for the U12 relay race.

These Girls were on a mission to succeed running with heart and determination and it was evident in the final pass of the baton, as Anya pulled away from the opposition down the finish line to be rewarded with bronze team medals. 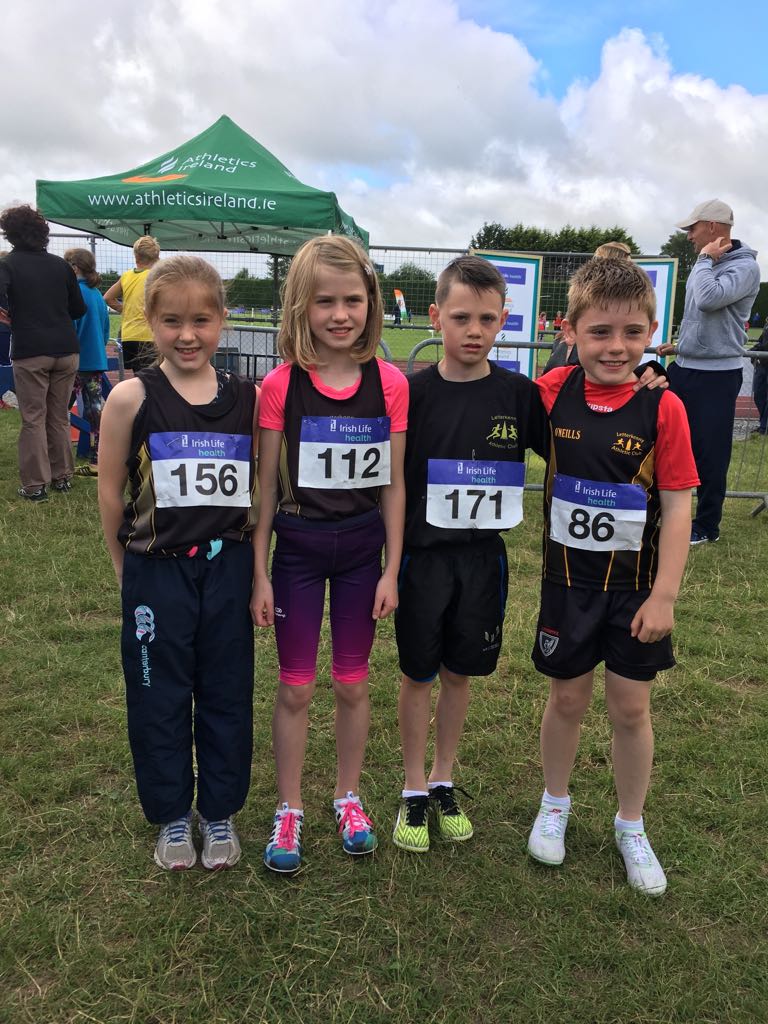 An Athlete making himself known at a young age in the running world is newcomer Temple Adiko. Temple ran the u12 60 m sprints (heats) along with teammates Daragh Naughton and Charlie Hegarthy all making it through to the finals. It’s fair to say Temple’s performance stunned everyone, winning his first Gold at Ulster Level. Joining him on the podium with a fine gutsy race was Charlie Hegeraty, taking a deserving Silver.

Mollie Page (u19) and Ronan Kelly  (u18) both competed in the 1500m race. Mollie maintained herself well over the seven and a half laps to take home a well deserved Bronze. Ronan was in top form, running great strides to take the third spot on the podium taking Bronze. Emma Price made it to the final of U16 60m, finishing sixth overall.

Jack Holian ran in u18 800 m with an excellent performance that secured him a Silver.

The U18 boys – Ryan Canning, Elvis Okoh, Jack Holian and Ronan Kelly – picked up Silver in the relay.

Day 2 saw the start to another array of medals.

Michaela Galvin, a talented all-rounder, earned herself two podium spots. She had an impressive jump of 4.85 in U17 long jump, which gave her a second-place position on podium taking home Silver. Michaela also made it to the final in the 60m sprints and excelled well earning a Bronze.

Danny McKinley who displayed his talent and ability in a challenging new event the 60m hurdles, straight final, securing a Silver. Danny along with Harry Shields and Jack Robinson all ran well in the 60m sprint, with Harry making it through to the finals .

Ita McGee and Eoghan Farren  competed in U15 60 m Hurdles, and like Danny showed great ability, with a fourth-placed finish for Eoghan securing qualification for the All-Irelands.

The U13 Girls had a busy day competing in a number of events. Starting off with 60m sprints, Erin Friel ran 8.77 to finish first in her heat, and later with a gutsy performance in final saw her take to the podium in second place, in an excellent time of 8.64.

Moving on to the 600m, each of the girls ran with strive and acquitted themselves well with Erin Friel placing third in time of 1.49 taking her second medal of the day, following with 2 seconds difference 1.51 was Emma Bonar in fourth, still securing her place for All-Irelands.

Harry Shields ran the U13 600 race in his usual style with confidence throughout the race, holding his own with strong determination displayed and had a strong finish (1.45) in secnd taking Silver. Jack Robinson put in a strong performance also.

Some other outstanding performances throughout the weekend from Declan Doherty in u16 60m, Fern Duffy in the long jump and 600m, Charlie Robinson, Philip McGee, Jon Antonio  in U15 800m and Sophie Ward.

Last Event of Sunday was the Relay 4x200m. The excitement and support was evident as the U13 Boys and U13 Girls lined up for the relay.

The U13 Boys Harry Shields (1st Runner), Danny McKinley (2nd), Charlie Hegerathy (3rd) and Jack Robinson otherwise known as the Dynamic Team, were certainly on fire. The boys battled their way around, gently passing the baton. It was closing in tight with the nearest opposition, but taking the baton for the last 200m was Robinson who was like a turbo, taking off and didn’t stop until he made the finish line with the ream taking silver on an outstanding thrilling perfomance.

The U13 Girls Emma Bonar (1st runner) got off to great start to pass to Ita McGee then to (2nd) Hannah-May Sweeney (3rd) and Sophie Ellis and all used their girl power, passing the baton, with the crowds cheering in the background.

The girls did not disappoint, with the last baton in hand, it was a clear run  for Sophie Ellis racing the last leg of the race  looking confident and determined got her to finish line clear to take Gold for the winning team.