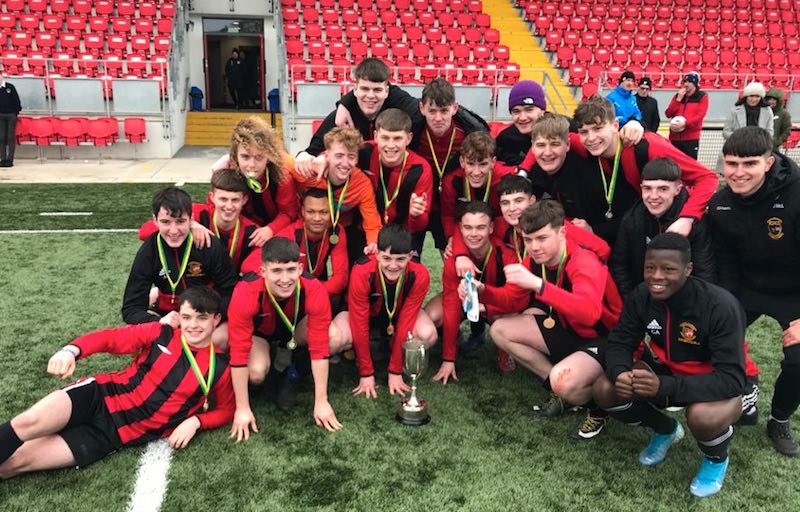 By Charlie Collins at The Brandywell

The goals came in either half as Paul Browne’s men overcame a Crana side that had lowered the colours of perennial All-Ireland hopefuls Carndonagh Community School in the semi-finals.

After a fairly even opening, St Eunan’s hit the front on 12 minutes. Oran Brogan knocked a ball wide, catching out the Buncrana rearguard. Dylan Doogan raced in from the right-hand between the centre-backs before drilling a superb effort across the ‘keeper and into the far corner.

Just two minutes later, a low cross from the always-dangerous Institute ace Brogan found Jack Dwyer. His first shot was deflected onto the post by the ‘keeper while the follow-up was blocked on the line by Niall McGlynn.

Those incidents apart, there was little goal-mouth incident until the 40th minute Ryan Wilson’s cross-cum-shot almost caught out Matthew Whoriskey, but the St Eunan’s ‘keeper readjusted his feet to make the save.

Four minutes into the second half, Joel Gorman’s cracking free-kick from 25 yards was brilliant saved by Ethan Caldwell, who arched over the crossbar.

Just before the hour, another Brogan cross found Jack Murphy, who volleyed over.

Buncrana had a big chance to draw level. Niall McGlynn’s long-rang free met by Kyle McCann, but his free header from 12 yards was narrowly wide.

Inside the next minute, Tiernan Brown’s long ball was flicked on by Brogan and Dwyer nipped in to lob in a delightful second for the Cathedral Town men.

Eight minutes from the end, Kieran Tobin blasted over from a Murphy corner and St Eunan’s sub Jordan Nugent, who was just on the pitch, got on the end of a Gorman pass, but Caldwell saved well.

In added time, Caldwell denied Nugent again while Dwyer was too high with the rebound.