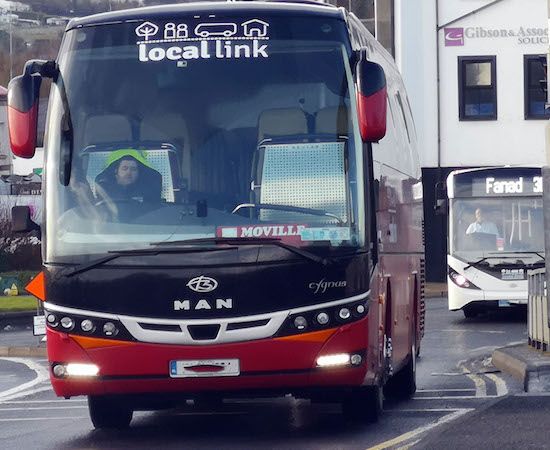 At the start of next month, Local Link will add even more routes to its service across Donegal. This week Donegal Daily went on the buses to see how the service is developing.

It was an early morning start heading down to Ramelton on Tuesday morning to give readers an on the road view from inside one of the new service buses that arrive from the rural areas to the different towns around Donegal.

They are all apart of a new transport network called Local Link.

We caught the Fanad Bus which starts in Portsalon going through Kerrykeel then over Glenvar into Rathmullan before arriving in Ramelton and finishing in Letterkenny outside Mr Chippys.

Before even leaving Letterkenny that morning I downloaded the app for Local Link Transport which had maps time tables and route description parking up along the mall near to Whoriskey’s Shop and looked for some sort of a signpost or something to tell me where the bus stop was.

Finding nothing I decided to look online at the map I downloaded. Now it won’t open. Previous experience tells me that it’s not the app that’s at fault here but the lack of network coverage along this part of Ramelton that’s the problem.

Someone in Whoriskey’s will know the craic, about where the bus starts from. So buying a bottle of water I ask the shopkeeper where does the local link bus stop.

“See that tree over there, in front of the oil lorry? Stand over there, that’s where the bus always stops,” says the shopkeeper.

It’s funny how you never much notice things around you until the subject becomes focused in your mind,

Suddenly I spot a John Joe Boyce Coach heading across the bridge in the distance towards me.

Even though I have seen the new white Fanad Service bus many a time outside Mr.Chippy’s in Letterkenny, I start to second guess that maybe John Joe Boyce is doing this run today, I stand out a bit further so they’ll see me.

It slows up a bit as it comes around the corner and even though the driver acknowledges me with a wee smile and a nod of the head, they just drive past me. Guess that wasn’t the Fanad to Letterkenny service bus afterall!

Looking at the clock on my phone, my bus is still not due for another few minutes and with that a few passengers start to stand about near to me along the Mall.

Now one of Mangan’s Buses makes its way across the bridge I just watch if they bus passengers will make a move, but they stay put plugged into their earphones in their own wee world as that bus also drives past.

It’ s now 8.25am the due bus time for this stop in Ramelton and in the distance a bus is making its way towards us but it’s not coming from Rathmullan direction which is where I think it should be. The passengers start to make a move and make a casual queue.

I’m thinking, this is not the Fanad Service Bus either. As the six passengers prepare to get on the bus. I stay to the back of the queue. “Is this the Local Link bus to Letterkenny,?” I ask the passenger in from of me. “Nah it’s not, but this one takes you to Letterkenny as well,” was his reply as four of the five waiting passengers board the waiting bus and I’m still waiting on the service bus which arrives shortly after.

This Local Link bus is less than a year old, which is a bit of a shock to the system for anyone that ever used the old Lough Swilly Bus Services in its day.

“A return to Ramelton Please.” “Certainly,” is the reply for very well turned out bus driver.

“By the way, this is no longer the stop for this bus in Ramelton. We now stop up at Gambles Square, on the way into Letterkenny in the morning but I can drop you here on the way back,” explains the driver.

The bus looks pretty full as I walk back the bus a bit, so I decided to stand holding onto one of rails provided in one of the two open areas. “Sorry you’re not allowed to stand, you need to sit down,” the bus driver suggests to me as he starts his journey across the Mall and up through Ramelton towards Gambles Square.

I find a seat and do as I’m told…..chat about making an entrance!

The bus lifts another passenger at Gambles Square and as we head up out of Ramelton my phone bleeps to bring up an earlier request to look at the Local Link app. Right enough the map show Gambles Square as the official stop. The bus doesn’t take long to arrive in Letterkenny and would be still on time if it wasn’t for the tailback of traffic into Letterkenny on the Ramelton Road. You know, it doesn’t feel as bad sitting in a traffic jam in a bus as it does sitting in a jam behind the wheel of your car

The first few passengers start to make a move to the front of the bus as it crawls through the traffic past Arena 7 a few students get out and head down to what once was AnCo in my day as a student there then called FAS and now called ETB Training Centre. Most of the passengers make moves to disembark as we arrive at the back door of the LYIT, and the bus drops off the last few passengers outside Mr Chippy.

I have twenty-five minutes to spare before the bus heads back to Ramelton, but it can’t sit at the bus stop in Letterkenny because there’s only one room for one bus really at this stop. But I have seen six buses sitting at the stop all with their engines running dropping off or lifting passengers from both private services to Dublin or Galway to all the privates and contracted buses that make up the Local Link Service in Donegal. A quick coffee in Boyce’s old Cafe and it’s over to the bus stop again, to wait for my Fanad Bus which arrives right on time.

As I depart out of Letterkenny I find that I’m the only person on the return journey to Ramelton.

My return ticket from Ramelton and back cost me €6 which I think was great value. Most of the people that travelled into Letterkenny that morning were students and this journey would cost them even less, and some of the passengers may have been pensioners which are entitled to their free travel on this bus.

Talking to Conal the bus driver, he finds dropping off his passengers in Letterkenny at a very congested single bus stop works most of the time as long as all of the bus drivers treat the bus stop as a bus stop and not as a bus parking space.

When that happens things soon get very congested. Some evenings Conal finds that he has to sit out the road a bit before his bus route time arrives to let other buses into the bus stop collect their passengers and move on.

The night before my bus trip on the Local Link App I tried to buy my ticket online but was unsuccessful. That could have been my lack of knowledge of the system, but talking to the bus driver the following morning he confirmed that at present it’s not possible to buy a ticket online. But that might change in the future.

Our bus was soon back in Ramelton and its single passenger on his return ticket (me!) arrived back at his destination safely.

Before I left Ramleton I drove across the Mall to get a photo of the old Londonderry and Lough Swilly Railway Co.( L&LSR Way Co). building which opened in Ramelton in 1864.

Situated on the pier, it’s a reminder of the company that provided transport in this part of the county for over one hundred and fifty years. This week talking about bus services a lot of people still remember those Swilly buses on the road. A lot give out about the condition of the buses but at the same time they miss the option that they gave for people to travel.

Local link Transport is working in all parts of Donegal and at the start of March, they will be adding even more new routes to the service in Donegal. So it’s worth considering this service and supporting it in your local area.

Letterkenny, in particular, needs to look at the options of providing more bus stops for this service in the town to allow these vital services to grow.