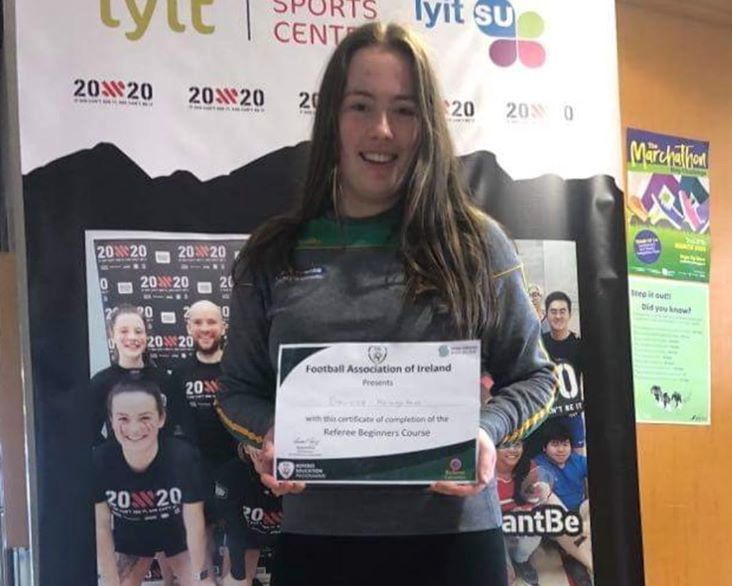 DONEGAL’S newest soccer referee, Danielle Houghton, takes up the whistle for the first time this weekend.

The 19-year-old Gleneely woman will referee the Inishowen Women’s League Under-12 match between Carndonagh and Moville on Saturday.

Danielle applied to do a recent referees course via the Beyond 20×20 Female Leadership Programme. The programme was offering opportunities in four areas – administration, coaching, media & PR and refereeing.

“I spoke to Maggie Farrelly at Donegal Sports Partnership – she’s a GAA referee and co-ordinating the programme – and she asked me if I’d do the course,” Danielle told Donegal Daily/Donegal Sport Hub.

A sports student at Letterkenny Institute of Technology, Danielle completed her course on Sunday-week past at The Diamond Park in Ballyare.

“It’s something that I was looking out for,” she said. “I know there is a shortage of female referees. Especially at tournaments, I’ve played the likes of the Gaynor Cup and the Foyle Cup and noticed that there are rarely ever female referees at them.

“I’m doing the sports course at LyIT and they bring women’s sport into the course a lot. I chose refereeing as it was the only one of the topics covered at my own course.

“It was just a case of the opportunity being there and me taking it.”

While female referees are a rarity in local football circles, Danielle isn’t quite the first.

Indeed, her aunt, Denise McElhinney – the renowned goalkeeper who is currently the Donegal senior ladies number 1 – took up refereeing a number of years ago and officiated in the Inishowen Schoolboys and Inishowen Women’s Leagues during a period out of action with an injury.

A goalkeeper herself, most recently with Culdaff in the now-defunct North West Women’s Super League and having also kept with Greencastle and Carndonagh, Danielle isn’t fazed by the prospect of refereeing.

“Being a goalkeeper, I’ve had to be think-skinned anyway,: she says.

“I’m actually looking forward to it. I really enjoyed doing the course and really learning about the rules of the game. It’s amazing how many people play the game and aren’t fully aware of the rules. It’s been weird to have played for so long and not know them all.

“I’m looking forward to getting to referee now and get the experience. I still want to keep on playing, but I’ll get good experience for a few years now.

“Hopefully others will join and if we got a 20 per cent rise with the 20×20 programme it would be a good start.”