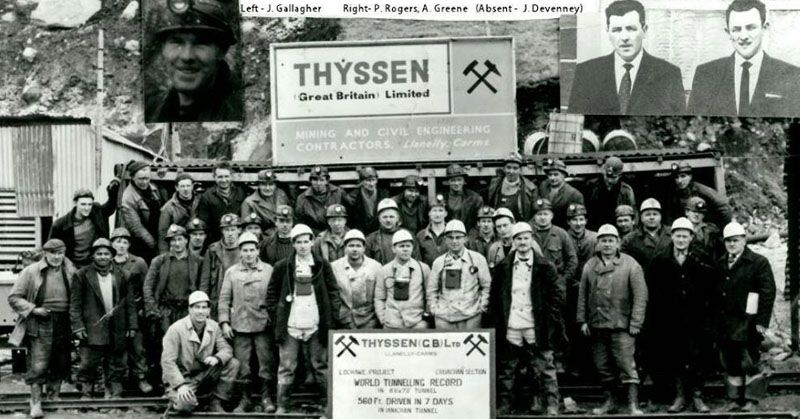 Did you know that nine Donegal men were part of a team that broke the Hard Rock Tunnelling World Record?

Fifty five years ago to this day, Donegal ‘Tunnel Tigers’ celebrated a remarkable achievement with their workmates in Scotland.

Their record has never been beaten, and their story is a fascinating one of risk and resilience.

The 14th March 2020 marks 55 years to the day since a group of Donegal’s famous miners, also known as ‘Tunnel Tigers’, broke a world tunnelling record, by advancing 560 feet in 7 days through some of the hardest rock in the world, during the construction of the Cruachan Dam, on the northern shores of Lochawe in the western Scottish Highlands.

In achieving the new record the miners broke the previous record that had been achieved at Comrie in 1955, also in the Scottish Highlands on the St Fillans section of the Breadalbane hydro scheme in Perthshire that has featured in numerous television and radio programmes including TG4’s 2014 programme ‘Tunnel Tigers Thir Chonaill’.

What makes the feat remarkable in comparison to modern tunnelling methods is that all of the rock was broken using basic hand drills and blasting while the men were sustained on a diet of milk.

The vast network of tunnels and caverns that carry water from the diverted Mhollie River to the massive hydro-electric generating plant deep under Ben Cruachan helped give birth to the name ‘the Hollow Mountain’ and a book of the same name celebrating the massive construction project was published in July 2015 by Scottish journalist and author Marian Pallister.

More than half a century later the project remains one of the largest civil engineering projects in British history. Construction commenced in 1959, and the scheme was opened on 15 October 1965.

A photograph of the record-breaking team was taken shortly after the record was broken but such was the constant nature of the work only some of the team members were available, as one of the three shifts were in bed having just finished their night shift.

How they achieved it

To break the record, the miners worked around the clock in three eight hour shifts from 7th to 14th March 1965 under the supervision of engineers from the Hydro Board and the main contractor Thyssen GB Ltd who were on site to validate the record.

On each shift, 5 machine men operated side by side in confined space of 8ft 6in wide by 7ft high, drilling a series of eight foot holes which were then blasted, after which the stone was extracted using the EIMCO and removed from the tunnel via a locomotive and skips.

One of the 8 hour shifts, the ‘Irish Shift’ consisted of 5 Rosses machine men Donal Doherty, Joe Boner, George Boner, Paddy Rogers and Dinny O’Donnell. Two other pivotal members of the crew were Scot McRea and the locomotive driver Burra who was Polish. One shift consisted entirely of Polish miners, who had first arrived in Scotland during World War II.

According to Joe Boner things did not always run smoothly during the week, ‘after 3 days of steady progress we hit extremely hard rock that considerably slowed our progress down. Had the earlier rock continued we could have beat the record by 60 feet’. In the end we were satisfied to have created a new record’. Other difficulties encountered during the record breaking attempt included ‘the derailing of skips and locos, which meant that on some shifts, very little if any progress was made’.

News of the incredible feat reached Donegal via local print media having first been reported in Scotland’s Daily Record, which reported that: –

The world champion tunnel tigers of Ben Cruachan Scotland, came down 1,400ft, to their sea level camp, said goodbye to their mates, and took off home after breaking the world record for tunnelling through a mountain after a week’s tough battle with granite, deep inside a mountain, driving an aquaduct to take the water toward the great Loch Awe hydro-electric scheme

Seven nationalities formed the 42 man team working three shifts in their daily attack on the Mountainside. During the week they consumed 80 gallons of milk, a staple diet of tiger-men too busy to eat.

In a sign of the times, the Record also highlighted the risks that were taken, risks that would be unlikely to be permitted in a modern tunnel ‘in their bid to beat the record the tiger men waived the usual long wait, to allow gases, after dynamiting, to disperse.’

Each of the 42 record breakers received a personal letter from their employer as well as a small bonus and an inscribed silver lighter: – The letter stated that: –

On behalf of the Board of Directors of Thyssen (Great Britain) Limited, I wish to congratulate you on your contribution to the team achievement in advancing the Ianachain Tunnel 560ft. during the week ending 14th March 1965.

By this effort you achieved a new World Record in hard rock tunnelling in a tunnel of this size (8’6’x7).

It is a record of which you may be justly proud and typifies the excellent team spirit.

At the end of the week the company organised drinks and food in the camp with over 100 people in attendance to celebrate the achievement.

The record was also celebrated on the front page of the Oban Times newspaper on Thursday 18th March 1965.

Atlas Copco who supplied the drills, drill bits, compressors and loaders that were used by the miners during the record-breaking week also recognised the world record in a newspaper advert shortly after the record was broken.

Not long after the World Record was set, modern machinery began to replace manual labour and many of the tasks carried out by the miners were gradually replaced by machinery. As a result, the World Record still stands 55 years later and is an achievement that each of the miners can continue to be proud of.