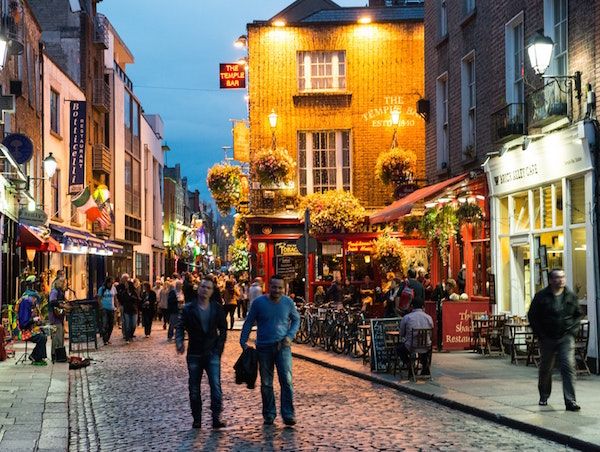 Temple Bar publicans have announced a complete shutdown of all bars and nightclubs with immediate effect.

It will mean no bars open in the area for St Patrick’s Day and the closure could last for weeks.

It comes following videos and newspaper reports of huge gatherings of people in the area in recent days including last night.

The decision was reached following a meeting of around 35 publicans and advice from gardaí and the health authorities.

Martin Harte of the Temple Bar Company said the decision was taken voluntarily.

He said: “This is the owners of all pubs sitting down and deciding this is the best thing to do in terms of public health and safety.”

Taoiseach Leo Varadkar said the Government may seek enforcement powers to ensure that the ban on no indoor mass gatherings of more than 100 people applies to pubs and clubs.

It comes after images and footage emerged on social media showing hundreds of people packed into pubs over the past two days.

There have been 129 cases of Covid-19 in the country, with two deaths so far. Another 45 cases have been confirmed in Northern Ireland.

Leo Varadkar announced on Thursday that country’s schools, colleges and childcare facilities would close in response to the Covid-19 pandemic.

He also said all indoor gatherings of more than 100 people and outdoor events involving more than 500 should be cancelled.

In a tweet this morning, Mr Varadkar said he could refer the matter to the Dáil and Seanad.

He said he had asked the National Public Health Emergency Team for further expert guidance on the issue.

Mr Varadkar said people who had been out this weekend should avoid physical contact with seniors or people with chronic diseases.

He said contact with such people could make them “very, very sick”.

“While we fully support the Government’s health guidelines our members do require urgent clarity about how to manage the current situation.

“We stand ready to help in any way we can but the Government must give us clear and unambiguous instructions that we can pass on to members. Like all small business owners, publicans are worried about the future.”

Minister for Finance Paschal Donohoe has said the Government had a “grave concern” about people still attending pubs and clubs in big numbers,and not adhering to measures on social distancing.

Temple Bar to close pubs and nightclubs ahead of St Patrick’s Day was last modified: March 15th, 2020 by Staff Writer