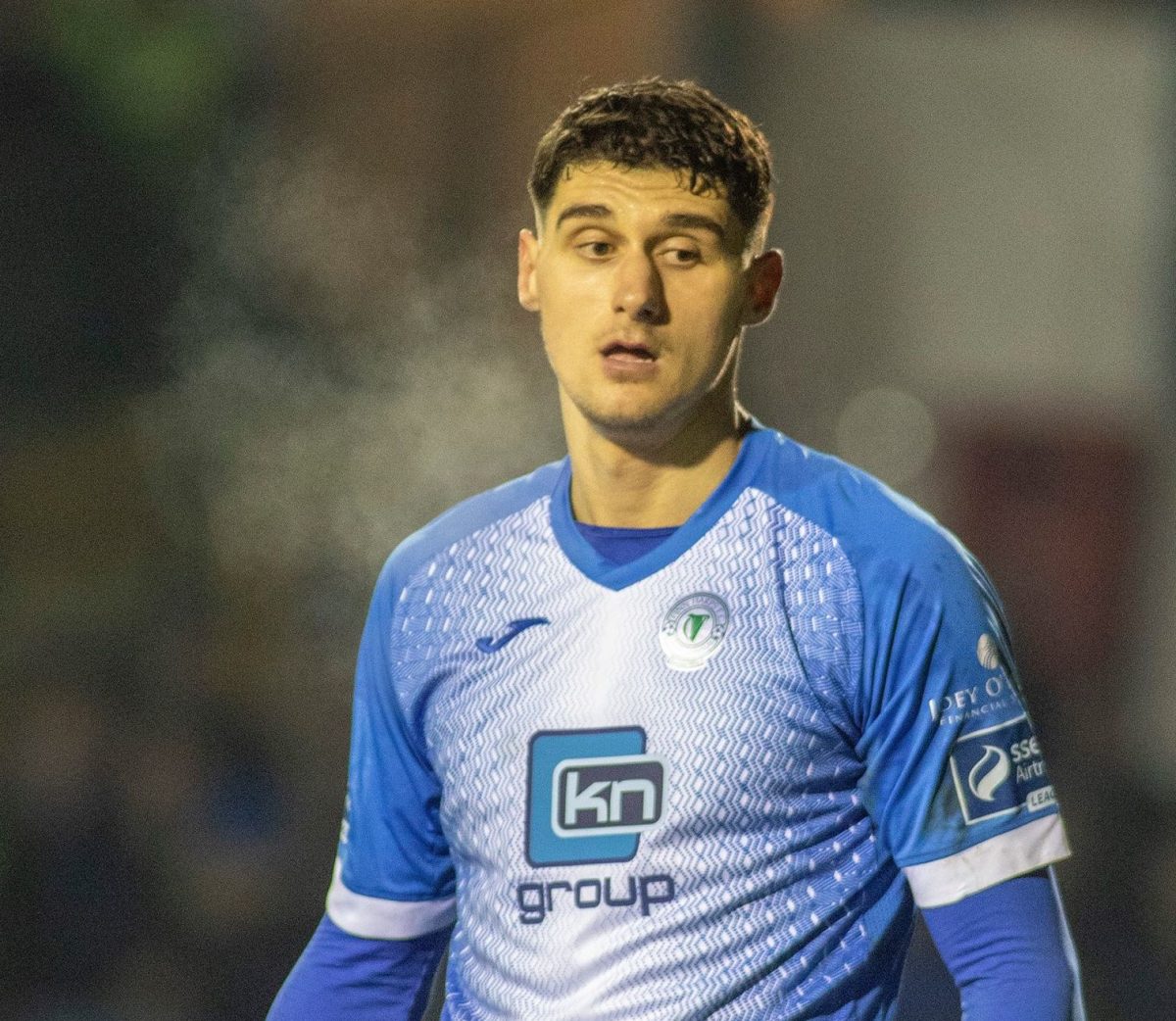 HIS name in itself is a pointer, but that is only to tell a small part of Kosovar Sadkiki’s story.

The 21-year-old defender, currently on loan at Finn Harps from Scottish Premier League side Hibernian, was born in August 1998; a time when the land of his heart was being torn by war.

Sadiki was born in Moers, Germany, but his family moved to Canada less than a year later.

His grandparents had already fled from Beliq Ferizaj, now in Kosovo, but which has long identified as Albanian.

In 1998, the area was in the grip of the Kosovo War. The conflict, which claimed over 13,500 lives, ended in June 1999, by which time the infant Sadiki was in Ontario, unaware of the hardships of his family, his grandparents initially landing in Canada as refugees.

Sadiki represented Canada up to Under-23 level, including at the 2018 Toulon Tournament in France.

The more he grew, the more he became aware of who he most wanted to represent.

“I had a conversation with the Canadian manager after the Toulon Tournament and I told him that I had decided to play for Albania,” Sadiki says.

“I am transitioning over now in terms of my passports. I had to make a decision as there are only so many passports you can hold.”

Albania, though, pulls a little greater than any on the heartstrings.

He says: “I and my family are patriotic. I am proud to be Albanian. The family blood is from Albania.

“It was never an option before now due to the passport situation.

“Canada took care of my parents and my grandparents went there as refugees. It was complicated on who I wanted to play for, but I decided to play for Albania.

“I want to play for Albania and that will depend on how I do at Finn Harps this season. If I get good games at this level and in this League, it will make a huge difference.

“I just want to get good performances and experience in this league now playing first team football in a professional league.”

Sadiki was alerted to Harps’ interest by his agent in December.

The prospect intrigued him.

Interest came from elsewhere, but the season-long switch to Harps ticked a lot of boxes.

He arrived at first for a week’s trial and his first experience gave him an insight into the club he was coming to.

After touching down in Dublin Airport, Sadiki was collected by none other than Harps manager Ollie Horgan, who drove him to Donegal.

He says: “Finn Harps is a real family club and you see that with how the gaffer looks after players, sen off the pitch.

“It’s a different vibe here. The club is a lot friendlier and it’s a real family environment.

“When I first met Ollie, he said that I would get games and gain loads of experience against real strong teams.

“I wanted to come somewhere I knew I’d play. I had some other offers coming in, but I was focussed on this one. I don’t how the others would have turned out. After that week training here, I was keen to get something done.”

Horgan’s intense passion for the club and the game struck Sadiki on that initial journey from Dublin to Ballybofey – and he has seen nothing in the meantime to change his opinion of the Harps boss.

“Ollie was great. The big thing that stood our was how passionate he is. To see how passionate he was for a club like Finn Harps, you could tell how much it meant to him. We fight for every game. Even in training, himself and ‘Higgsy’ (Paul Hegarty) are really passionate.

“My main focus coming here was to get as many games as I could at the highest level I could play at. I can see and hear there have been a lot of changes.

“We can play and it will just take some time for us to get confidence in playing with the ball.

“You can see that Ollie is trying to bring in as much as he can and you can tell we’re trying to play and to make a difference now. Our team-talks aren’t ‘listen this is Dundalk’ – we’re actually going for it.

“Even against Dundalk, we were playing well, but conceding an early goal was bad for us. We conceded two bad goals in the first half and the third killed the game. It put the game to bed, but people can see, I think, we’re trying to play good football.”

Sadiki played as a schoolboy for Kitchener FC in Canada, before a dream became reality.

Like so many kids, Sadiki yearned for a move to England. The Premier League was the schoolyard goal.

A move across the Atlantic was sealed.

“It was always a goal for me to get to play in England so when it did happen I wasn’t afraid of it,” he says.

“I knew if it happened it meant i would have to leave Canada. It was different for me.

“My father was coaching me in Canada, a a recreational team and going from there to the training group in Stoke was a big transition for me.”

Mark Hughes met with the Sadikis and, soon, he was signed on a four-year deal.

During the fourth and final year of that contract, Sadiki – sensing that perhaps chances may not be plentiful – took the decision to leave Stoke and he headed for Croatia, where he signed with NK Lokomotiva.

He says: “First-team chances would have been rare at Stoke and my main focus was games.

“In the reserves at Stoke, I felt I was playing at a good level, but there were other centre-halves there too playing well. Looking back now, I was probably rushing it a bit.

“I was still young, but time was ticking and I was getting more frustrated so I moved in the January of my last season.”

He had a trial at QPR, but elected to head for Croatia before moving to Hibs last January.

He keeps in close contact with Grame Mathie, Hibs’ Sporting Director, and the club’s physiotherapists, who monitor his progress. Eddie May, the Head of Hibs’ Coaching Academy, is another who has had a positive influence since his move to Edinburgh.

“I speak with them every week after games,” he says.

“There isn’t much different actually and the sessions are similar.

“We usually train, Monday, Tuesday and Thursday, play Friday and do recovery on Saturday.

“The only difference is that at Hibs, I’d be in at 9am and be done by 2pm. That would end with a gym session at 1pm. Here, we train at nighttime so you have to take it on yourself how you do the gym.

“The standard is good here, especially the games. The training standard was a big point in coming here. I realised how good it is, even comparing to reserve level and reserve games where I’ve been used to.”

Harps had made a positive start to the season, with four points from their first four games of the season.

Sadiki has had to adjust somewhat, playing now at the heart of a three-man rearguard having been one of two centre-backs in a back-four at Hibs.

“That role now in a back-three is different,” he say. “There is a bunch of new players at Finn Harps and we’re gelling well. The starting elevens so far, I think, have been mostly new players, but we’re getting comfortable with each other and our main goal in terms of our shape will take time.

“I feel like I have a different responsibility now in the middle, but it will get easier, I’m sure.”

With the League of Ireland – like much of the world’s sport – on a shutdown in an attempt to curb the spread of the COVID-19 virus, the immediate future is uncertain for Sadiki, who lives in Ballybofey with team-mates Mark Russell, Cameron Saul, Leo Donnellan and Karl O’Sullivan.

With no collective training at the moment, the players are following individual plans.

“We’re just trying to find stuff to do, but there isn’t too much with the weather and the virus closures,” he says.

“We started to play ping-pong, but it became boring because Leo was just smashing everyone!

“It’s getting boring, I suppose. We’ve done a lot as a group, but we’re struggling with no wifi and just using data on our phones the whole time. It’s horrible and we’ve no xBox going yet!”