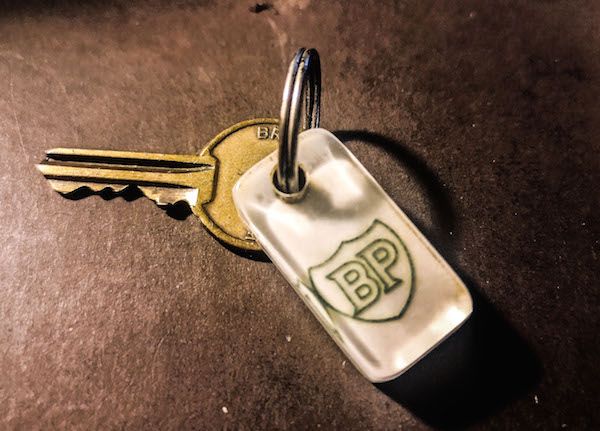 It was sifting through a box of old photos while off these last few weeks that I finally found the link to tell this story, a story that has been told to me by many different people over the years.

The late Hughie Green, was hopefully the first link.

This famous Donegal man who made it big for himself in New Zealand was home to Letterkenny for one of the earlier reunions.

In my line of work with the Donegal Democrat, I was sent to get a photograph of this famous emigrant.

Bringing up the story that I was trying to find out about that Hugh had a connection with ended before it started because Hugh Green couldn’t recall the story that was told to me by my family years before that.

The late Hugh Green who well like to believed was a helper with my grandfather on an oil Lorry for Irish Shell.

He did remember my family but the only memory of my grandfather, Willie Coyle was that of him on the door of the Old Devlin Hall back in Hugh’s youth. Nearly a decade further down the line a mystery tour on another Letterkenny reunion was to take me on a journey of a different route. On a stop off in Moville was a good chance to get a few photographs of the different people that came home for the reunion from all corners of the earth

I was pointed in the direction of an immigrant from New Zealand by the name of John Greene who was a brother of the famous Hugh Greene who also emigrated to there. It felt a little Déjà vu to me as I lined up this Donegal man in my camera and pressing the button to record his image.

Chatting to John, after, he started by asking me, “and what McDaid are you now?”
I’m Fred’s son, he worked for the ESB, “aw right” he replied with a pleasant but vacant gaze. I was just about to walk away to take my next photo and I turned back and threw him a last Letterkenny reunion lifeline. “You might have known my mum, she was one of the Coyles from Ballymacool Tce.”

“Pop Coyle’s daughter!” He quickly replied, “why didn’t you say, gosh Pop was some boy, I was only just thinking about him when we landed in Moville today and seen the Lough Swilly bus parked up the town here in town”

John Green started telling me his story of working with my grandfather as a young helper on the oil lorry working for the old oil company Irish Shell through and towards the end of World War II.

Bridget Coyle (Nee Doherty) and some of her sister , Annie and Ellen , (possibly) pictured at her old watched shop which now belongs to Kernans at the foot of the town.

He described how all the oil had to be delivered by hand, filled down from the oil lorry and filled into two big oil cans which were carried up steps to a raised oil tank in farmyards so it would flow out to fill farm machinery.

This was the young Green that my grandfather always talked about who emigrated all those years ago. When my grandfather passed away in 1977 the story was continued and over the years as John’s brother Hugh became the more famous of the two brothers our family mistakenly thought it was Hugh Green that worked as a helper on the oil lorry with my grandfather, Pop Coyle, when it was in fact his bother.

At the end of the yarn, looking up the street in Moville, spotting the Swilly Bus and nodding towards where it was parked up, and ask John “why did the Swilly Bus remind you of working on the oil lorry?

John explained that on a Saturday afternoon when the run was finished we had to go into Derry to the docks to get a fill of oil to be ready for the road on a Monday morning. My grandfather who had a wee make-shift shop in a front room rented in a thatched house at the bottom of the back road sometimes found it hard to get supplies so he would buy supplies across the border in Derry.

John recalled “The cab of the oil lorry was very small just room for the driver and a helper, so your grandfather got around this by paying me the bus fare out of Derry on a Saturday evening and put me on the Swilly Bus to Letterkenny so he could smuggle the much-needed supplies across the border stacked up on the passenger’s seat and my overcoat over them.”

My memories on my grandfather in his final years was not that of him running the border but was of him driving so slowly around the town in his red Opel Kadette. So when his youngest daughter Margaret who still lives in Melbourne was last home I asked her did she remember anything about her father smuggling supplies across the border.

She smiled in approval of the story that John Green had told me and even ended up on a mystery tour of our own to see if we could see if there was any trace of the old shed where the smuggled goods were stored on the outskirts of Letterkenny.

To our surprise the old stone store is still there where her father stored his supplies many years before.

The old Shed still standing on the outskirts of Letterkenny that my late grandfather Willie Coyle rented to store smuggled good during and after World War 2. Photo Brian McDaid.

Nearly a decade on and a very old faded black and white turned up this week which puts a face to the story. An old key fob from BP that was always on the key of his Opel Kadette in latter years paint a picture of a very young and very old William Pop Coyle, of a story told in our house for years, mistakenly mixing up the two Green Brothers as a helper on that oil lorry all them years ago.

I only know my grandfather on the left in the old faded photo based on other photos that I have of him in those years. Here he is standing in front of his Irish Shell oil lorry with just the letters ZA of its number plate shown.

Willie (Pop) Coyle on the left with his Irish Shell Oil Lorry which was used on occasion to smuggle goods out of the north. Also pictured is possible a very young John Green , brother of the late Hugh Green both of who imogeated to New Zealand.

What we are not entirely sure about is if this helper in the picture is John Greene who my grandfather shipped onto a Swilly Bus every Saturday evening so he could ship much needed supplies across the border to his wee thatched shop in Letterkenny.

Today that shop has changed hands a few times and now belongs to Kernan’s and in a war of a different and difficult time, it is one of the very few places now open at the foot of the town.