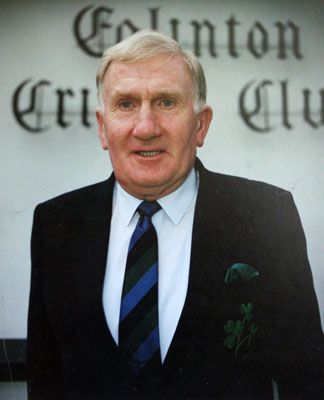 A MAN born in Donegal once topped the Wisden bowling averages – and is regarded to this day as one of Ireland’s greatest ever cricketers.

Scott Huey was born in Ture in December 1923. The town-land, between Muff and Quigley’s Point, straddles the picturesque waters of Lough Foyle.

Huey was educated at the Masonic Boys’ School in Dublin, but returned to the north-west, where he would make his name as one of the finest bowlers ever on this island.

Huey was capped 36 times for Ireland – making his debut in 1951 at College Park against Scotland – and captained the country five times.

Having first represented City of Derry, he moved to Eglinton. Huey’s arrival sparked a golden era at the Woodvale Road.

Clarence Hiles wrote that Huey ‘provided the spark that ignited their fuse’.

A slow left-hand spinner, Huey took seven wickets for the loss of 41 runs against Brigade in the 1948 final.  In the 1953 final, he took two for 74 against Ardmore. Some fifteen years later, he took four for 32 and seven for 56 as Eglinton overcame Donemana in the decider.

Renowned statistician Edward Liddle wrote of Huey: ‘He was a master of spin and flight, besides possessing a well disguised and highly effective faster ball.’

In all, while playing for Ireland, Huey claimed 112 wickets. In ‘first-class’ games, he took 66 wickets.

His greatest achievement was in 1954, while playing for Ireland against MCC (Marylebone Cricket Club, the club under whose banner England played under in those days in non-international Test matches).

At College Park, Huey claimed 14 wickets – including a superb match-winning second innings in which he took 8 MCC wickets for the loss of just 48 runs. His 14 wickets were taken against a collective 97 runs.

That year, over 130 bowlers were listed by Wisden and there at the top was Huey with a 6.92 average.

Huey had some magnificent displays for Ireland. He took seven for 84 against Lancashire in 1959, in 1952 he took four for 83 in 31 overs against India, recorded five for 46 against the West Indies in 1957.

When he was 41, in 1965, Huey was still a formidable artist at the crease, taking five wickets for 68 runs against New Zealand.

At club level for Eglinton, he twice had the rare distinction of taking all ten of the opposition wickets – both times against Donemana. In April 1949, he took a stunning ten for ten as Donema were sent to the pavilion 20-all-out. In 1961, Donemana were again dismantled by the deadly Huey, who took ten for 28.

Three times, Huey claimed nine wickets – nine for nine against City of Derry; nine for 67 against Donemana; and nine for 36 against Limavady.

Huey’s talents were not confined to cricket as he also represented Ireland in badminton and turned out for the Ulster hockey team.