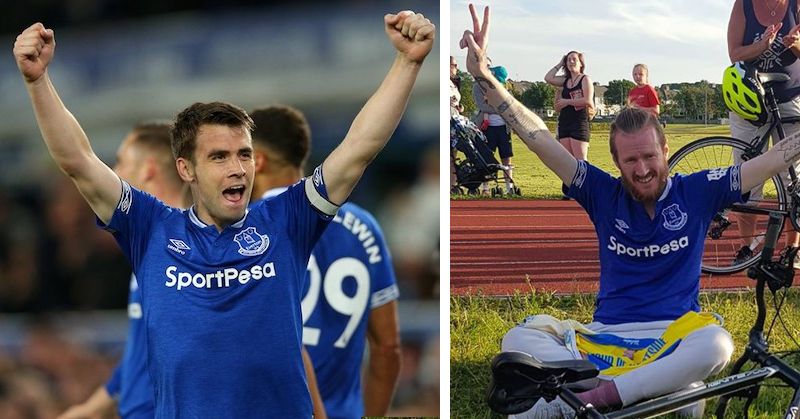 Republic of Ireland captain Seamus Coleman has helped an Irish comedian complete an incredible charity cycle challenge on a high by reaching a €60,000 target.

Everton fan Stevo uses a wheelchair and crutches following a motorbike crash in 2005. The Galway man’s mammoth cycle challenge was completed in memory of his mother and to mark 15 years since the motorbike accident that changed his life.

Cycling 5km was no easy task for Stevo, who hadn’t attempted physical activity of this level since his accident, as he has limited sensation from the chest down and weakness in his legs.

But he conquered the challenge and his fundraising target grew way beyond expectations.

By the time he was finished, he had set a new goal of raising sixty grand.

Toffees and Ireland ace Seamie Coleman stepped in to ensure that goal was met. A generous boost of €1,757 helped Stevo finally reach the €60K mark.

Stevo celebrated on Facebook, writing: “Lads Seamus Coleman just contacted me and told me he has donated the rest of the money to bring me up to the 60 grand!! Ah lads the man is an absolute gentleman. Up the feckin Toffees!!!!!”

The donation earned heaps of praise on social media, with people calling Coleman a ‘class act’, a ‘top man’ and repeating the Everton fan chant ‘Sixty Grand, Sixty Grand, Seamus Coleman’ – a nod to the bargain price Everton reportedly paid to Sligo Rovers for Coleman in 2009.