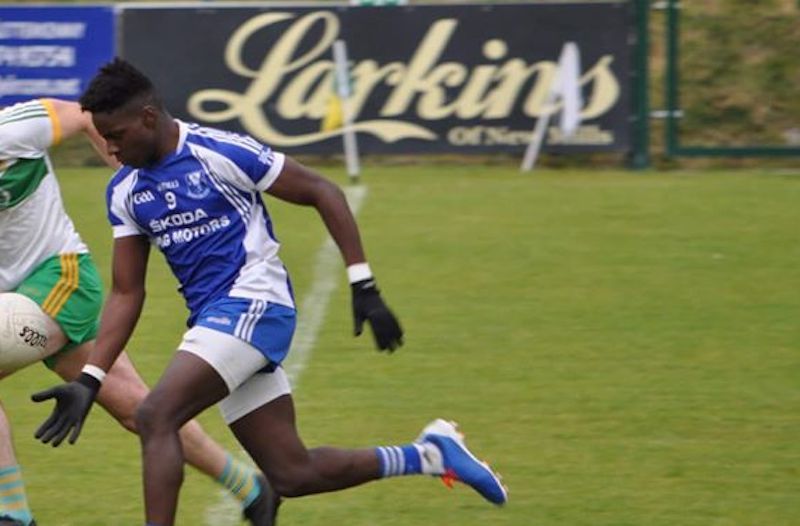 A YOUNG black sportsman from Donegal has opened up about his experience of being racially abused while playing in the county.

By Chris McNulty and Conor Breslin

Rahman Balogun says he has been the victim of racial taunts while playing Gaelic football, soccer and basketball.

The 24-year-old, born in Italy to Nigerian parents, has lived in Donegal Town since he was 10. The family moved to Ireland as asylum seekers and, after his parents were returned to Nigeria, Balogun was fostered in Donegal.

While he says he was taunted about his colour as a youngster, the issue came to a head in 2018, during a game with Four Masters in the All-County Football League.

“One player grabbed me, threw me to the ground and called me a ‘black f*cker’,” Balogun told Donegal Daily/Donegal Sport Hub. 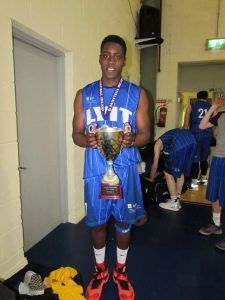 “It had been going on and on and on. I couldn’t handle any more. It had happened before to me, but that was the first day that I reacted. I took my jersey off and punched the fence as I walked off. I was angry with myself for doing that.

“I just snapped. I felt like I wanted to beat this guy up which is something I have never felt before. I went mad, took off my jersey and just walked off the pitch.

“After, the referee said he would put in a report. I said I didn’t want a big deal, but just to let it be known that it happened to me.”

Balogun, who graduated from Letterkenny Institute of Technology last year, works in the All Sports sports shop in Donegal Town. 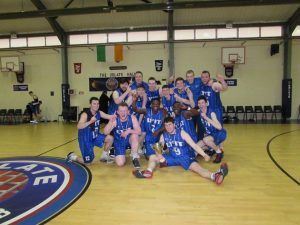 Having walked off the Tir Chonaill Park pitch on the day of the first incident, Balogun had a similar experience a while later during a reserve game.

On that occasion, an opponent told him to ‘go back to your own country’.

He said: “The guy who said it that day was trying to fight with me. I got thick, I went out of character and I kicked him. I was so raged that I did that. I didn’t know how to react. I took the jersey off and walked off.

“The overall emotion by people at the time was to go to the media and tell them what happened, but I remember thinking at the time I didn’t want to make a big fuss and just wanted the issue quietly addressed by the club and the GAA.

“Because I didn’t make a fuss the first time, everyone presumed I would just take this on the chin. Nothing was done to tackle the issue. 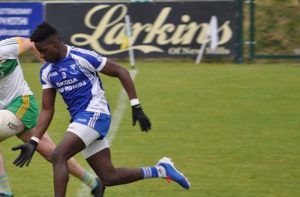 “It wasn’t even brought up to me after the match. Peoples’ mindsets were to simply not get involved. A lot of people probably just took it as a sly comment, whether it was or not, I felt it’s still racist and still bothers me that nobody off the pitch or in the GAA did something.“

In 2017, Balogun was a star player as LyIT won the NBCC Division 2 title.

During that campaign, he says he was called the N-word on the court by an opponent.

He said: “The basketball court is usually not as bad because there are a lot more people from different backgrounds who play the sport.”

Overall, Balogun has had a positive experience in Donegal and counts himself very much a ‘Donegal man’. He said: “I had a decent childhood very welcoming place. Not everyone is a racist and not everyone is a bad person.”

Balogun lines out for Donegal Town FC in the Donegal Junior League. 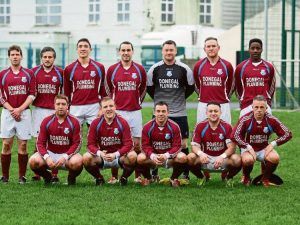 He said: “I have had players say things to me in the soccer like: ‘I wouldn’t talk to the ref’ too much with where you’re from’ and players will shout to others: ‘Mark that black fella’ and then correct themselves to say ‘oh, the number 11’, or whatever number I have on.”

Balogun says that the issue has troubled him enough to finally speak out.

He said: “I would go into my room and it would stay in my head for the whole week. I feel that young black players can’t speak up because they don’t have the platform. It can’t keep going on and on. It can’t be allowed to happen. It has to be penalised and dealt with.

“In GAA, it is being talked about a lot now. I love the fact that GAA players of all different backgrounds are coming out now to talk about race in the GAA. They have a huge platform and presence to make themselves heard. I just hope that they know how bad it is at all levels of the GAA and not just on a county level.

“People like to use the excuse by pointing fingers saying the USA is worse for racism, and yes, it is, but that doesn’t excuse the fact that Ireland is bad too. A lot of people in Ireland don’t get it, and why would they.”