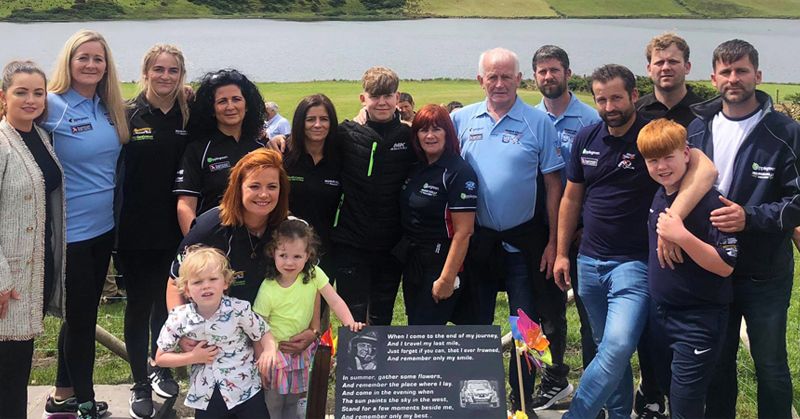 ‘King of the Hills’ Manus Kelly honoured at tree-planting ceremony

The sun came out on a day of darkness as the family of the late Manus ‘Mandy’ Kelly held a memorial ceremony on the first anniversary of his tragic death.

A year ago to this day, Manus lost his life when his Hyundai i20 left the road during the 2019 Donegal International Rally. The tragedy occurred near a field at Baile na Brocar, Fanad, and it was here that Manus heartbroken family chose to gather and honour his life today.

Together, the Kellys planted a tree as a permanent feature of the memorial garden in John McConigley’s site.

A rosary was led by Fr Michael Sweeney, one of the priests who administered the Last Rites to Manus on that fateful Sunday in 2019.

Among those in attendance at the ceremony were Manus’ co-driver Donall Barrett, the MK Rally team, rally drivers including Declan Boyle, Garry Jennings and other competitors.

The special garden contains a marble plaque, a bench made by Manus’ wife Bernie’s brother, Christopher McBride, and a steel car carved by Shane McGinley from Milford.

The new tree, Bernie said, will offer some comfort in the years to come.

“As the tree will get higher, that will make me feel better,” Bernie said in an interview yesterday.

“Manus loved Fanad. It’s so amazing that he ended up exactly in a place like that, looking over water, which he loved.”

Bernie Kelly looks back on the life, laughs and legend of Manus on his first anniversary

The local man who became the King of his Hills – Manus Kelly, one year on