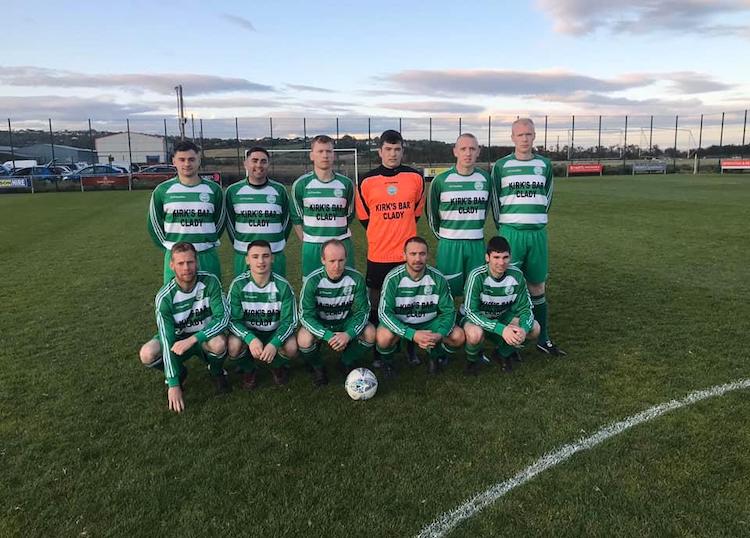 Castlefin stay right in touch with valuable away win

DEFENDING champions Castlefin Celtic ground a narrow win over Bonagee to maintain their pursuit of the title again as the Premier Division swung into action following the Covid-19 hiatus.

Aaron O’Hagan and Shane Gallagher netted for the Parkview side, either end of a Coady Brogan goal for Bonagee.

O’Hagan put Castlefin in front on 32 minutes when the defender applied the finish after Shane Gallagher touched goalwards from a corner.

Earlier, it had taken a fine double save by Chris O’Donnell, the Castlefin goalkeeper, to keep Bonagee at bay. O’Donnell made himself big to thwart McMonagle before blocking the follow-up by Brogan.

Castlefin were shook into action and Marty Owens’ forward foray won a corner, from which O’Hagan was denied by a good save from John Carr, the home goalkeeper.

O’Donnell parried from Greg Magee’s powerful shot as Bonagee sought a way back.

The Dry Arch men – who won promotion to the Premier Division last season – got back on level terms seven minutes before half-time. Aaron Wasson’s through ball teed up a race between Brogan and O’Donnell. The scampering Bonagee winger got there first and prodded past the advancing ‘keeper for the equaliser.

Kieran Friel shot over late in the half with a chance to put the visitors back in front, but the Parkview side regained their advantage just three minutes into the second half. With the hosts’ defence napping, Gallagher converted after connecting with a cross from the left.

Friel might have put the game beyond Bonagee’s reach, but he clipped wide from a good opening.

McMonagle was prevented from levelling by O’Donnell before the same player was unable to keep down an opportunity.

In added time at the end, Bonagee had big claims for a penalty when Darren Hunter, up from the back, went down in the penalty area, but referee Alistair Gourley waved away their appeals.