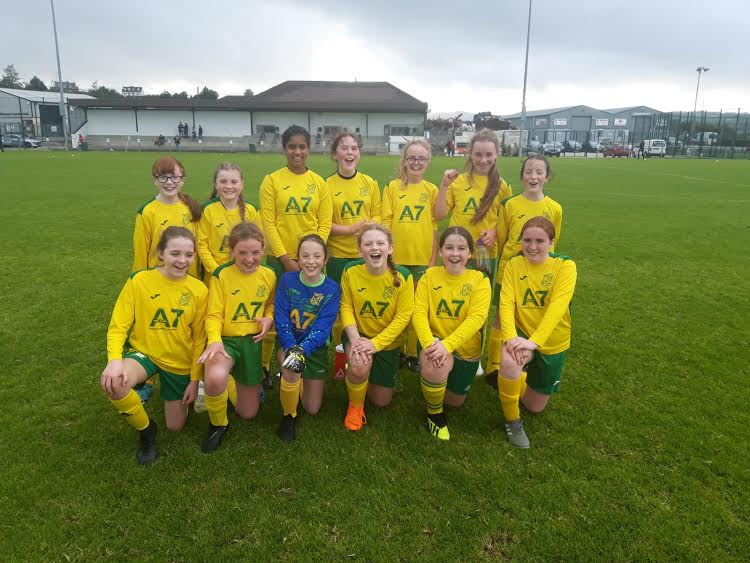 Donegal Women’s League underway – full roundup from U12 and U16s

THE 2020 Donegal Women’s League belatedly kicked off this week with an exciting programme of matches.

The start of the League was delayed due to the Covid-19 pandemic, but teams are back to work again.

Picture: Bonagee United Under-12s after their win over Finn Valley.

This was a very closely fought contest in Lurgy Park with near neighbours taking a share of the spoils.

Swilly went one up early on with a long-range strike from Chloe Boyle, and they continued to play the better football for the first 20 minutes and were justly rewarded with their second from a free kick, Katie O’Gorman scoring with a long range effort.

Kilmac came out fighting after the water break and were unlucky to concede a penalty, but Caitlyn Doherty was unable to convert it.

Just before half time,Kilmac’s pressure paid off when a brilliantly executed move from a throw in finished with Maeve Brady firing the ball into the back of the night. They were back in the game.

The second half was a very even contest, with Niamh Mangan manning Kilmacrennan defence and Ellie Duffy alive to every chance the hosts got.

Eventually, the sides were level, with Maeve Brady again the scorer.

Ellie saved from a super strike by Lauren Doherty, only to palm it into the path of Maeve. The sides were level and overall it was probably the fairest results.

Played on a lovely evening in ideal conditions both teams served up a cracking game of football.  It was testament to both teams who gave everything for the 80 minutes considering it was the first game of the season.

A nice tribute was paid before the match as everyone in attendance observed a minutes silence in memory of Illistrin FC coach Seamus Corry who sadly passed away last November.  Seamus did so much for girls football in the last number of years and all at Illistrin FC will be forever grateful.

When the game kicked off the home team got their passing game going early with Emily Irwin and Nicole McDaid combining well up the right.  Jodie McFadden was showing well up front and Erika Gallagher was providing plenty of support.  Kate McAdoo and Aoife Gibbons started well for Mulroy.

Despite the early pressure from Illistrin it was Mulroy who almost broke the deadlock when good play from Rachel Friel resulted in the ball following to Megan McLaughlin and her shot produced a save from Aobhin Randles.

Indeed Randles dealt very well with Mulroys dangerous balls over the top in the first half.

Illistrin defenders Darcey Kelly, Sarah McGinley, and Katelyn Lenihan were playing good football from the back but had to keep an eye on the lively Mulroy forward Clodagh Heron.

Illistrin broke the deadlock in the 12th minute when Leanne McGettigan won possession in the midfield and played Jodie McFadden through on goal.  The talented forward produced a lovely chip to give the keeper no chance.

Before half time Illistrin produced some long range efforts and some good crosses from Nicole McDaid but Leah McLaughlin in the Mulroy goal was equal to the task.

The start of the second half saw Mulroy up the tempo and grow more into the game.  In the 49th minute a long free kick caused trouble in the Illistrin defence and despite clearing the original danger Mulroy full back Meabh McAteer fired a dangerous ball back into the goal mouth that was saved by Aoibhin Randles but was pounced upon by the impressive Eva Blaney and she made no mistake from 6 yards.

In the final quarter of the game the home team launched attack after attack but could not find a winner. Jodie McFadden went through again after good play from Katelyn Doherty but Leah McLaughlin saved well. Soon after she produced a great save from Ciara Molloy who had two bites at it.

The next chance fell to Nicole McDaid but her effort went over the bar from the edge of the box.

Meabh Devenney and Sophie Curran did well on the left for Illistrin when introduced.

Credit to the Mulroy defence for standing tall in the last 20 minutes with Aoife Sweeney and Caitlin Heraghty both very solid.  Erika Gallagher’s free kick went the wrong side of the post and in the dying seconds a great cross from Ciara Molloy was headed back across the goals by Jodie McFadden but Erika Gallagher just failed to make a connection with Mulroy’s Maria Carr in close attendance and doing enough to see it out.  Almost the fairytale ending for Erika Gallagher who will be joining the Donegal U17 National League team.

Bonagee welcomed Raphoe Town to Goose Green in the first U16 game of the season.

The Bonagee girls started the brightest with good work from Heather McLaughlin and Aimee Hegarty.

Hegarty turned her marker and was fouled inside the box. Grace Murphy made no mistake with her penalty.

Murphy got her second of the evening when Hannah Hopkins broke free on the right hand side and played a great ball into Murphy, who got on the end of it with a lovley volley.

Raphoe kept their heads up and tried to play in Alicia McCullagh a number of times on the right but Cliodhna Patton stood tall.

Aimee Hegarty, who made her debut for Bonagee this evening, grabbed her first goal when she was played in and finished into the corner.

It wasn’t long before she grabbed her second when she cut in from the right hand side and took a long range shot that riffled into the top corner, giving Rebecca McColgan no chance in nets.

Early in the second half, McCullagh was judged to have handed the ball inside the area. Grace Murphy grabbed her hat-trick with a fine finish from the spot.

Hegarty finished off her night with her third goal after a pass from Callaghan and she finished well.

Hopkins, who came close on a number of occasions, made it seven when she made a fine run down the wing and finished well while McColgan, who came out for a period in the second-half, scored a consolation for Raphoe.

Hegarty, on her debut was the Player of the Match with Murphy, Hopkins and McLaughlin all playing well.

McColgan in goals for Raphoe had some fine saves with Cora McBride playing well in defence.

Bonagee got off to a strong start, with an early goal from Aoife Porter.

Shortly afterwards Lydia Pearson had a great run up the field and with great determination landed Bonagees second Goal.

Just before half-time Grace Patton scored the third goal, which deflected off a Finn Valley player on the way in.

Finn Valley came back strong in the second half, scoring a goal early on.  They continued to push forward and were rewarded with a second goal near the end.   Finn Valley pushed hard for the equaliser, but it wasn’t their night.

A special recognition to Ruth Hopkins who bravely took control of the nets and made some great saves.

Also Sophie Doherty and Tara Gildea in defence, who were a big thorn in Finn Valley’s side, stopping their advances time and again.

Ballyraine girls got their season off to a winning start on their new pitch at orchard grove. Despite the scoreline this was a tight battle against a young determined raphoe outfit.

Cara Shiels with a hat-trick, Emer Cassidy with two and lovely finishes from Rosie Doherty, Aoibheann Sheridan and Cara McGonagle did the damage for Ballyraine.

However they were made to work for their goals with Raphoe keeper Aoife Browne in her first game putting in an outstanding performance which included a second half penalty stop.

Cliodhna Kelly was a constant threat for Raphoe and helped herself to a hat-trick also.

Milford started their season with a home win.

In the first half Milford proved to strong for Illistrin. They were 4 up at half time. In the second half Milford made several changes but they continued to take control.

A hat-trick from Erin Nelis and Chloe McConigley-Blaney saw the game over. The other goal scorers were Amy Patton,  Abbie Harkin and Ava Molloy.

But Illistrin continued to fight and  got a goal back in the second half. A great team performance from Illistrin.

Milford meet Mulroy in their next game with two sisters going head to head.

After a long awaited return to play the Mulroy under-12 girls got their season off to the perfect start with a home win against a very strong and well organised Kilmacrennan side.

Aoibhe Quinn in the Kilmacrennan nets was in top form and pulled off some massive saves throughout the match which kept her team in the game until the final whistle.

First half saw goals from Aoife Cameron after 5 minutes and Kaylagh Sweeney after 20 minutes which left the teams level at half time.

The second half saw Mulroy settle into the game much better and Meabh Sweeney after two minutes got her opening goal.

Twenty minutes later Meabh had her second following a long throw-in from Kaylagh.

Both teams should be very proud with their opening performances giving the supports plenty to look forward to in an exciting season ahead.  Both teams had solid defensive players but best for Kilmacrennan was without doubt Aoibhe Quinn with Leah Gallagher playing her first ever soccer match outstanding for Mulroy.

Well done also to Mulroy girls Orlaith, Erin and Eimear playing their first time in the under-12 league.