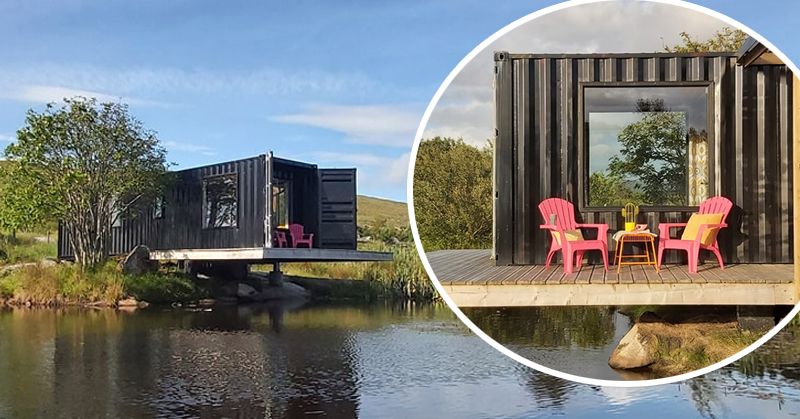 Donegal is riding the wave of success when it comes to self-catering accommodation this summer.

And one lakeside hideaway is really floating the boat for visitors.

Frank the Shipping Container has sparked a lot of interest for ‘glampers’. Newly opened in July, the recycled storage unit sits over a coastal lake overlooking Traighenna Bay in Lettermacaward.

This unique structure was converted by architectural historian Dr. Greg Stevenson, the founder and owner of Under the Thatch. The holiday accommodation agency has several properties in Donegal, the UK and France, and each place tells a different story.

Frank’s story goes from China to Omagh. The container was once used to transport ‘JCB’ type excavators overseas. A transformation, estimated at €35,000, has turned it into a contemporary and definitely quirky holiday rental that has attracted huge interest.

“Obviously we had a disastrous spring and now we are having a fantastic summer. I had him just ready in time for July when things opened and he’s been full every night since,” Stevenson tells Donegal Daily.

Stevenson has had a busy year building in Donegal. He opened a new ‘Hide’ cottage yesterday, which is designed like a wildlife hide so people can watch red deer outside their windows. A third property is in development to hopefully open later this year.

‘Frank’ was a “very nice” project for Stevenson, he says, as he tackled the experiment of having it cleverly hanging off the edge. It was named after Frank Lloyd Wright, an architect hero who was interested in testing structural cantilevers to their limit.

“I had to do some research into how far you can cantilever something safely. It involved a lot of Googling and asking engineer friends. You can make a little model very easily by taking a packet of biscuits and hanging it off the edge of a table, you can work where the optimum cantilever is before things start to go downhill.

“I worked out what it was and it is cantilevered to such an extent that when you are standing on the decking the building gently bounces, it’s perfectly engineered in that sense, that was fun.”

Stevenson adds: “Just sealing a shipping container was more challenging than I anticipated. When you weld in the windows and doors you have to be really careful to get everything absolutely watertight. We did it, but it is more work than I expected it to be.”

At 30 sq m in size, Frank contains all the elements of a small apartment, complete with a private bedroom with a full-sized bed, a shower room, kitchen, sitting room and decking.

Visitors use it as a base to explore nearby Dooey beach, or they take the maps provided by Stevenson to go to smaller beaches, see the local seal colony or take a trip to Glenveagh, Slieve League and Assaranca waterfall in Ardara.

Through hosting visitors, Stevenson has seen how the centres of tourism have moved in Donegal.

“It’s really interesting how Instagram has really changed tourism in the county, places that were hardly heard off ten years ago are on everyone’s hit list,” he says.

“Donegal has become so much more popular than it ever was, and different places are becoming popular, Traighenna Bay has become popular, whereas before it was all about Portnoo and Dunfanaghy.”

Self-catering accommodation is having a contemporary revival too, with more modern structures making the most of the natural landscape.

“There is some really interesting contemporary and modernist architecture open in Donegal now. At Under the Thatch we have the Eye of the Mountain, Frank the Container and the Shephard’s Hut. Other people are doing different things, like Breac House in Dunfanaghy.

“Donegal is leading the way in terms of new types of self-catering accommodation in Ireland. That’s probably because it’s sort of a new destination, it was always about Connemara or Kerry or Galway, now Donegal is having its day at last and I’m really pleased with that,” he says.

Frank too, was chosen in a nod to buildings we see all over Donegal.

Stevenson says: “Shipping containers are very much part of the Donegal landscape, there’s not a town in the county where you won’t find one, they’ve been here for decades. Of course, usually they are just farm storage sheds, but that is why I wanted to try this particular project which was to try and make a beautiful one.

“So often, buildings that are built in Donegal aren’t appropriate to the landscape, and I wanted to build something that was related to what you do see in Donegal and was also sensitively done so in the future it could be easily removed.”

As unusual, as it is, Frank was given planning permission by Donegal County Council due it is being solely a holiday rental.

“I’m very grateful for the support of the council, we’ve been able to build some really fantastic contemporary architecture here. The council does get a lot of criticism, but if you go to them with good ideas and good qualify stuff they are really supportive,” Stevenson says.

“I’m a great believer in providing tourist accommodation in the county, in the past, it’s been about holiday homes, which are second homes, they don’t really contribute to the wellbeing of the county. In many ways, that’s what kills parts of rural Donegal. They are empty most of the time, people aren’t there to support the shops, bin services, schools, churches, etc. whereas commercial projects like this are going to be full most of the year and some are literally full 365 nights of the year. We are very lucky to have some of the busiest properties in the county that are full every night.

“We need these projects because they really help rural communities, especially in the off season, we are able to provide local employment and people go to the local shops and are looking to eat out all year round, it’s good that the council are supporting these projects.”

Check out www.underthethatch.co.uk to see availability for Frank and other Donegal properties.