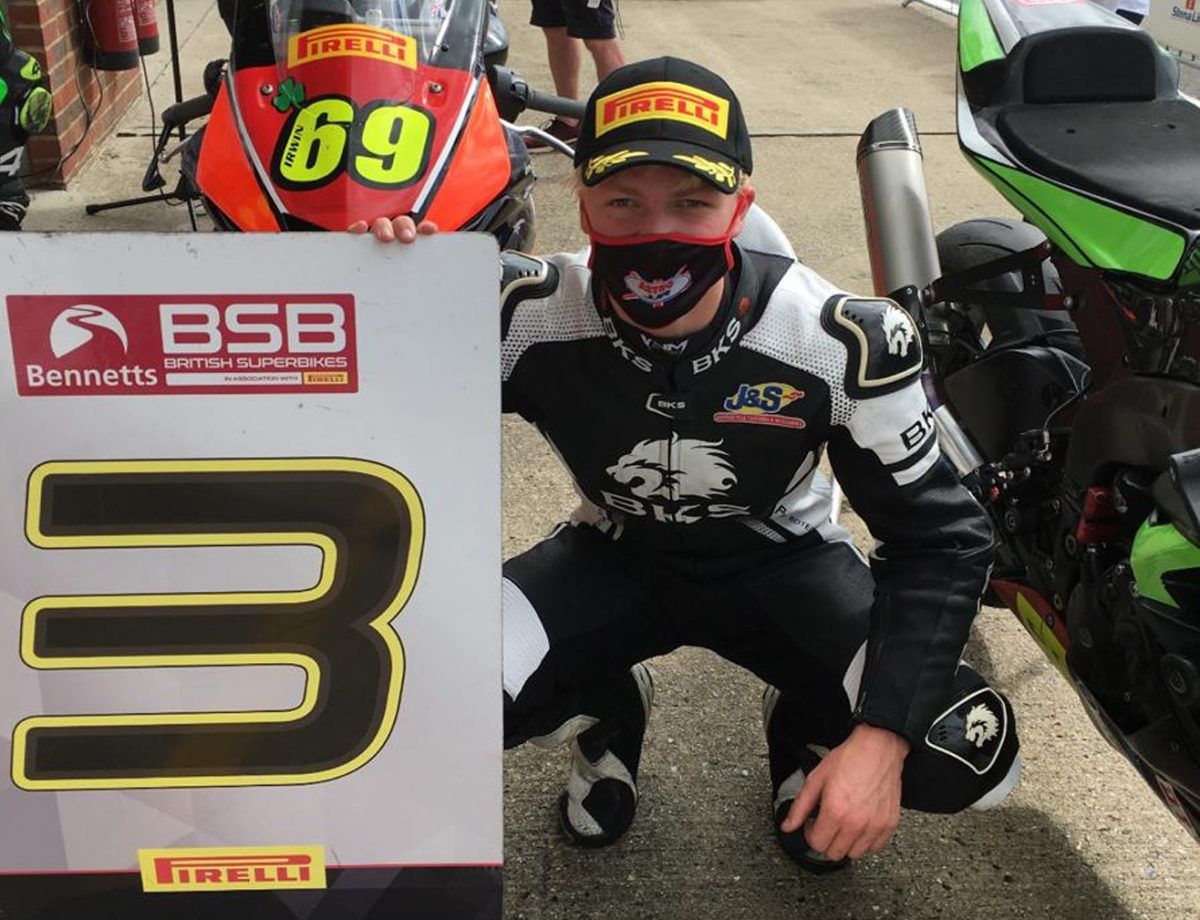 DONEGAL TEENAGER Rhys Irwin took a major step forward in his career with a sensational performance in the British Superstock 600 Championship at Snetterton, Norfolk.

The young Irish rider took pole position on Saturday and followed it up with third place in Sunday’s race.

The weekend did not go to plan however for his older brother Caolán who, following strong performances in the opening round two weeks ago and running at the front in practice, did not complete a lap in either qualifying or the race.

Having finished at eighth at the opening round, Rhys Irwin continued to make progress in Friday’s practice sessions as he worked to get the set-up of his Mondello Park backed Yamaha just right. Fourteenth in Practice one was followed by a big improvement for the second session, which saw him move up to ninth.

Things would go even better in Saturday’s qualifying for the Kilmacrennan based rider as a late charge saw him take a hugely impressive first ever pole position.

A steady start in Sunday’s race meant that Rhys finished lap one in sixth place, but he was soon on the move and by the end of the second lap he was up to third and closing on the leaders. By half distance the Irishman was the fastest rider on track as he moved into the lead for the first time.

With two laps to go Rhys was sitting third under no pressure from behind and decided to settle for the place and his first Podium finish at this level.

Speaking straight after the podium celebrations Rhys said: “I’m almost too happy to speak. The team worked so well all weekend to get me here and I’m delighted to reward them with this podium, as well as my first pole position, in such a major championship, and in my rookie season.

“I have to thank Mondello Park for their support this season, Mark Arnott of Moto Shox for all his set up help and everyone else who is supporting me, Oasis Bar, J & S Accessories, Motorcycling Ireland and Astro Van Centre. Of course I would not be here but for the support of my team, Mam, Dad, my brother Caolán and Wesley Regan.

“This result means that we head for Silverstone in two weeks time third in the championship and now I just cant wait.”

Despite his disappointing weekend Caolán Irwin still sits sixth in the standings and will be looking to bounce back at Silverstone. “This weekend was not what we needed, but these things happen,” said Caolán after Sunday’s race.

“An electrical problem in qualifying meant I had to start from the back of the grid on Sunday. I was ready to make up for Saturday’s disappointment in the race and had passed about fifteen riders at turn one before getting hit from behind at turn two to end my weekend. We ran at the front throughout every other session and I know myself and the Astro Van Centre team will be back in contention at Silverstone. Once again I’d like to thank all of the team at Astro JJR and my supporters, Principal Insurance, RK Racing and J&S Accessories.”

Round three of the 2020 British Superstock 600 championship takes place on the Silverstone National circuit from September 4th to 6th.

Richard Kerr was in action at round 2 of the British superbike championships (BSB) at the weekend.

In the Supersport class, Kilmacrennan’s Richard Kerr was in action at round 2.

Kerr, riding the Campbell Motorsport Triumph, had a disappointing weekend by his own admission and just couldn’t get comfortable with the bike.

Qualifying on row 5 Richard was always on the back foot and finished Saturday’s sprint race in 14th position overall and 12th in supersport.

Lining up on row 6 for Sunday’s feature race, Kerr made a great start and was running in 12th position in the early stages but again he was struggling and fought to the end finishing in 16th position. The seven riders ahead of him were contesting the GP2 class so Richard finished 9th in the Supersport class and some more valuable points.

The Snetterton circuit has never been kind to Richard in the past so the Team can move on now and hope that Kerr can bounce back at Silverstone in two weeks time and challenge for the rostrum once again.