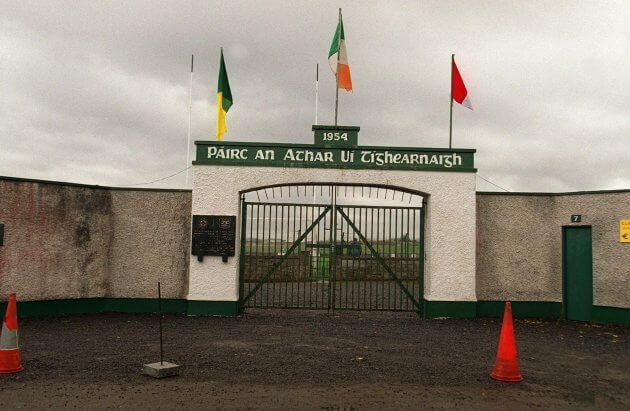 AODH RUADH are the first team in the hat for the semi-final draw of the IFC following victory over Naomh Muire at Fr Tierney Park – coming from behind with good use of the breeze after the break.

The Ballyshannon side having blistered knuckles at this stage having spent since 2011 knocking on the door to get back into the senior bracket and as usual, are listed among those who are most likely.

Today in the eerie surroundings with only echoes from the few permitted to attend, they came from two down at the break to win. When Aodh Ruadh got going it looked like it might be a procession but Naomh Muire fought to the bitter end. Phillip Patton scored a total of eight points as Aodh Ruadh weathered it.

He popped over two nice points from play in the opening six minutes to overwrite an opening free from Eoin Martin of Naomh Muire. With the wind playing havoc, the only other score of the first quarter was another effort from Patton – this time from a free.

The side from the Lower Rosses won their first three group games, only for a defeat at Malin in their final outing meant an away quarter-final.

Naomh Muire weren’t taking the type of advantage they’d have liked with the elements – awkward as they were – with them. Peter Boyle in the hosts’ goal had to be alert to punch away an irregular dropping ball from an attempt by Daniel Ward. Martin was on the money with the 45, meaning on 20 minutes Aodh Ruadh were 0-3 to 0-2 in front.

On 21 minutes though, Martin was at it again, when he got away from a posse of Aodh Ruadh defenders certainly not practicing social distancing and laid off to Ultan Boyle to punch a goal one-handed past his namesake Peter Boyle and the covering Colm Kelly.

Naomh Muire were learning, whilst Aodh Ruadh dropped a couple short into Declan Ward’s breadbasket and into the wind before Patton and Shane McGrath scored late points. In-between those, Daniel Devlin caught and could’ve marked a long ball in from Thomas O’Donnell. Devlin had only Peter Boyle to beat but smashed over the crossbar.

At half-time, Naomh Muire were 1-4 to 0-5 ahead, but knew well there would have to be a change in tact with the conditions.  Aodh Ruadh had won three from four, losing at home to Cloughaneely, with a victory at Gaeil Fhanada sealing a top four berth and eliminated the need for a road trip. Barry Ward knew at the break this team would have to make home comforts count.

It didn’t take long – Philip Patton, the returning David Dolan with his first touch and then Shane McGrath had Aodh Ruadh 0-8 to 1-5 up on 35 minutes. And it continued, with Philip Patton’s double and a 45 from Nathan Boyle. It was 0-11 to 1-4 for Aodh Ruadh at the three-quarter mark.

Naomh Muire hadn’t so much as an attack in the third quarter but moved it better through the hands in the fourth. Aodh Ruadh repelled those advances for the most part before goalscorer Boyle scored their first point of the second half on 51 minutes. Despite their travails, Naomh Muire were only three down, while the home side were guilty of being a little snatchy. Daniel Devlin’s second point brought Naomh Muire back to two down, 0-11 to 1-6, three minutes from time.

Phillip Patton, though, had shown all day he knew where the posts were, and he steadied the ship. Michael McKenna, Shane McGrath and David McGurrin made sure. Aodh Ruadh are still knocking.