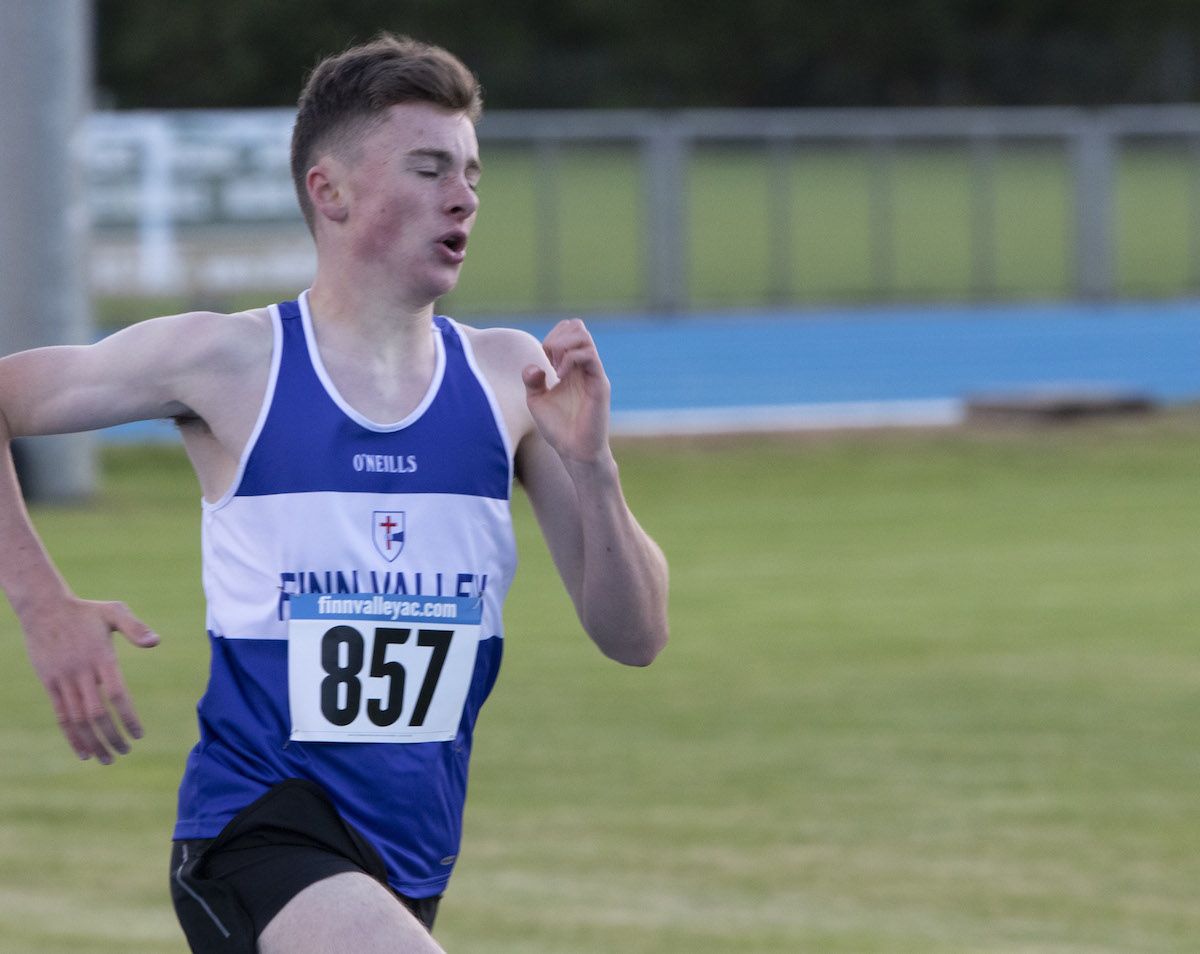 THE surprise presence of Ireland’s greatest athlete, Sonia O’Sullivan, added to the occasion and then some as Finn Valley AC hosted their second graded meet of the autumn last night.

O’Sullivan won 16 major Championship medals in a stellar career and the Cobh woman was trackside in Stranorlar for one of the few athletics meets to go ahead in this strangest of years.

Twenty years ago this month, O’Sullivan won the silver medal in the women’s 5,000m at the 2000 Olympic Games.

Finn Valley AC’s Patsy McGonagle was the Irish team manager on that epic night in Sydney, still regarded as of the greatest nights ever in the history of athletics, when O’Sullivan took silver, just behind Romania’s Gabriela Szabo.

Athletes from Galway, Mayo, Limerick, Sligo, Leitrim Dublin, Antrim, Armagh and Monaghan came to take part in a variety of track and field events, with O’Sullivan one of the few permitted in the venue to view the action.

The rain clouds peeked hauntingly from above Barnesmore but, although the sun hung around to shine down, the wind made life difficult down the home straight of the Patsy McGonagle Track.

The conditions were best described by Letterkenny AC’s Kathyrn McDevitt, who competed in the 200m and 400m and reckoned the wind would ’pull the soul from you’.

The performance of the night was for James Kelly, who won the shot put with a 16.65m attempt.

It was a serious throw by the St Johnston man, who bettered the 16.48m effort that saw him take silver in the National Senior Championships last weekend, when he was beaten only by his older brother, John.

Kelly’s 16.48 effort for second place on the podium was a new personal best for the 2020 Irish Universities champion – and last night he went even better.

Kelly competed at the European U20 Championships in Sweden and he has broken some of the records set by the elder of the St Johnston siblings.

“For a young man of his age to be closing in on 17 metres is serious throwing,” McGonagle said.

“He is really on line and he has worked very hard.”

Among the highlights of the night was a five-second personal best for Oisin Toye of Finn Valley AC in the 1,500m.

“That was hard,” the Deele College student gasped at the finish after going 4:10.92.

“The pace was very hard. I was third going into the second last bend. I just went out to the third lane and went for it. I put in a good time. It suited me with the wind at my back. I got into the first lane at the last bend. It was really hard in the last 100 metres.”

Toye had to drawn from every sinew of his determination to stave off Glenn Donnelly (Acorns) and Shane Moran (Swinford) as he hared for the line and his performance delighted his coach John Rogan.

He said: “I had to fight the whole way. The wind made it very hard. I was lucky to stay behind someone for a while bar the last 100 metres. I’ve only had three races here on the track. It has been difficult and it has been mentally hard with limited races. It was very enjoyable to get out and get back out against people.”

Jamie Mitchell came all the way from the Emerald City AC to set a track record of 50.01 seconds for the 400m.

Mitchell was third in the 400m at the 2020 National Senior Championships and came from Shannonside to end his season on a positive note as he targets the European Under-23 Championships next year.

“That wind is rough – especially on the home straight,” Mitchell said.

“It’s a good track and it was a good race. When you have 300m done and come into that wind for the last 100, it’s tough. It’s the worst place possible to have a wind, but that’s 400m running for you.

“It’s good to get a chance to run a competitive race. There are very few at the moment. I wanted one more race to end the season. targeting European U23s next year.”

Finn Valley AC’s Gerard Gallagher took the chance to race on the home track and he took victory in the 3,000m as he heads for the Ulster Senior Championships next weekend.

He said: “It’s great to be here under the lights competing on the home turf. The more races I can get here the better and I’m looking forward to the Ulster Seniors now next Saturday. Other years, we had to travel to Belfast every couple of weeks to get events. It’s brilliant to have graded meets her now at Finn Valley.”

Gallagher had the edge on Mark McPaul (Finn Valley) and Sean Melarky (City of Derry) to win in 8:58.81 with Darragh Crossan just pipped for a podium spot.

City of Lisburn’s Anna McCauley, a 2017 Commonwealth Youth Games competitor, had to be inventive during lockdown. For instance, the multi-eventer had hurdles made from plumbing supplies to hone her skills at home. Last night, she won the 200m.

“That was my first 200m of the season and it’s preparation for the combined events next week,” she said. “I stayed with the boys a good bit. It was great to get a race like this to compete in. It has been difficult not being able to train as normal and I had to make do with what I had, but I got there.”

Ballymena’s Ronan Bloomer took the spoils in the high jump and Tir Chonaill AC’s Shane Breslin was the gold medalist in the javelin.