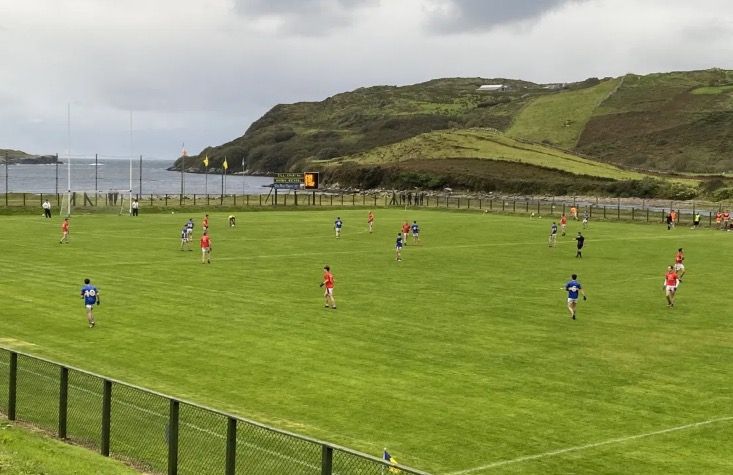 KILCAR were given the fright of their lives as St Michael’s came back from 12 points down to two, twice, in the second half and left Towney aggrieved with a penalty that wasn’t given and a point that was.

John McNulty’s team looked to be in control of things right before the break, when they had a 2-9 to 0-3 lead. St Michael’s managed to pull themselves back into things with a fine second half with the wind, getting back to within two points in the closing stages.

McClean’s goal, part of 1-5 personally, made sure Kilcar made it through to the last four – even if there was a late scare when Michael Langan managed to score a goal from a late free-kick.

The side from Towney were third in the charts overall after round one, whilst St Michael’s came home sixth. The wind was always going to be a telling factor in Towney, with Kilcar having it at their backs as it rolled in from the Atlantic in the first half.

Kilcar and Eoin McHugh in particular used it well. From midfield, McHugh flashed over two from distance and inside, Patrick McBrearty marked three times. Matthew McClean had put an awkward free from the sideline wide it seemed, although referee James Connors – who initially said wide too – consulted with a linesman and changed his original decision and awarded a point.

The opening goal came after only seven minutes when St Michael’s were caught trying to work possession out from the back, with Conor Doherty squaring to Darragh O’Donnell to shoot past Oisin Langan.

St Michael’s were doing well enough from their own kick-outs and had an edge in physicality. However, they had to make sure they were still in the match at half-time. Kevin Campbell in the Kilcar goal saved from Michael Langan, who was perched in at full-forward, to sound a first half alarm bell.

Kilcar lost Brian O’Donnell to injury and he was replaced by the experienced Conor McShane on 20 minutes.

Conceding a second goal was a blow to Gary O’Neil’s team. It came in the 28th minute from another avoidable situation and St Michael’s could only watch on as Stephen McBrearty scored from a pass by his brother Patrick. That made it 2-8 to 0-2 and concluded a run of 1-5 on the bounce from the home team, who looked home and hosed.

St Michael’s managed to fashion a goal right on half-time when Martin McElhinney won a break from an Oisin Langan kick-out and Colin McFadden got in and drove under Campbell. At the break, it was Kilcar 2-9 St Michael’s 1-4.

Kilcar’s problems on the edge of their own square continued when substitute McShane was black-carded for dissent after a foul was given on Ryan McHugh for what looked like a clean challenge on Colm McFadden,who put over the close-range free.

Then, controversially, with the score 2-11 to 1-7, St Michael’s were denied what appeared to be a clear penalty – at worst a free on a chalk of the square – when Martin McElhinney went down under a sliding challenge from Mark McHugh. McElhinney falling still got a pop off on goal, which Campebll saved. However, referee Connors waved play on.

On 48 minutes, St Michael’s did get a ball when the ball fell the way of Michael Langan, who drove into the bottom corner and suddenly, they were right back in the game – Kilcar 2-11 St Michael 2-8.

A brilliant 45 into the wind from Matthew McClean settled Kilcar bur the Dunfanaghy team kept in touch, getting back to 2-12 to 2-10, before the same player goaled in the 57th minute to give his team a cushion. Towney might’ve been muted with the Covid restrictions, although the championship feel certainly wasn’t diminished.

The cushion didn’t last long though, as a couple of minutes later from a 20-meter free, Michael Langan, who looked as though he wasn’t completely over his ankle injury sustained on opening night against Glenswilly but played excellent  all things considered, blasted high into the Kilcar net despite the square being populated.

Two behind, that was as close as the away team would come and despite almost pulling off the most heroic of comebacks, left Towney as the togged in in the car park, somewhat aggrieved. Kilcar certainly got a scare, but they survived the test and will live to tell the tale for another week – at least.