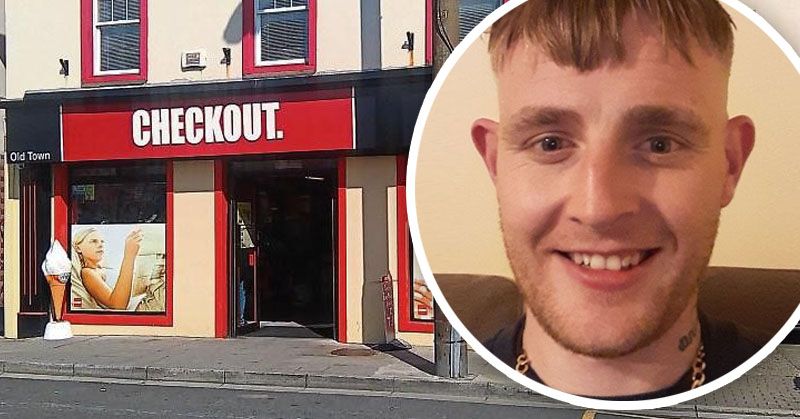 Man jailed for 18 months for robbing shop with meat cleaver

A man who held a meat cleaver to a shop assistant’s throat during a terrifying robbery has been jailed for one and a half years.

Darren Quigley burst into a shop in Co Donegal, threatened one staff member with the weapon and then ordered another assistant to fill the bag with cash.

The father-of-two entered the store on August 14th, 2016 with a hoodie over his head and a scarf around his face and grabbed one of the shop assistants around the neck and held the meat cleaver to his throat.

Quigley then ran from the store with €970 in cash in the bag.

Detective Garda Tom Kilcoyne just happened to be in the area in an unmarked patrol car when he first spotted Quigley.

It was a warm summer evening and Detective Kilcoyne’s attention was drawn to a man wearing a padded jacket with a scarf over his face.

The Garda got caught in traffic but circled back around and saw a man running out of the local Checkout store and he noticed the man was holding a weapon which he thought was a knife.

He radioed for back-up and the man ran towards Lower Main Street with Detective Kilcoyne in pursuit.

The man tried to hide in undergrowth but was trapped by a fence and was eventually arrested after raising his hands and giving himself up to Detective Kilcoyne.

Detective Peter Cullen said that it would have been impossible to find the culprit but for Detective Kilcoyne.

“If Garda Kilcoyne was not there we may have been chasing shadows,” he said.

When caught, Quigley claimed his name was ‘Timmons’ but eventually gave his real name.

When interviewed at Letterkenny Garda station he said he was high at the time of the robbery and did not remember doing it.

Two shop assistants who were in the store at the time of the terrifying ordeal were also in court and their victim impact statements were handed in to Judge John Aylmer to read.

Barrister for Quigley, Mr Damien Crawford said his client was originally from Carlow but had moved to Donegal to live with his girlfriend and before this incident had no previous convictions.

Since the robbery he has tried to turn his life around and is now drug-free and had a job in security but lost it after checks were done and it was discovered he committed this crime.

Mr Crawford said this “project” was doomed to failure as Quigley was high, actually lived near the shop he had targeted and was even recognised by one of the assistants.

He said he now has two children and has been offered jobs in landscaping and construction.

Passing sentence, Judge John Aylmer said the robbery was a frightening and terrifying experience for the two shop assistants.

He placed it at the upper end of the lower range of such robberies and that it merited a sentence of four years in prison before mitigating circumstances.

However, Judge Aylmer said that Quigley had no previous convictions at the time, had pleaded guilty at an early stage, was now drug-free and had good opportunities of employment.

He sentenced Quigley to three years in prison but said he deserved something for the mitigating circumstances.

He said the offence was “too serious” to suspend in full but did suspend the final 18 months of the three years sentence.