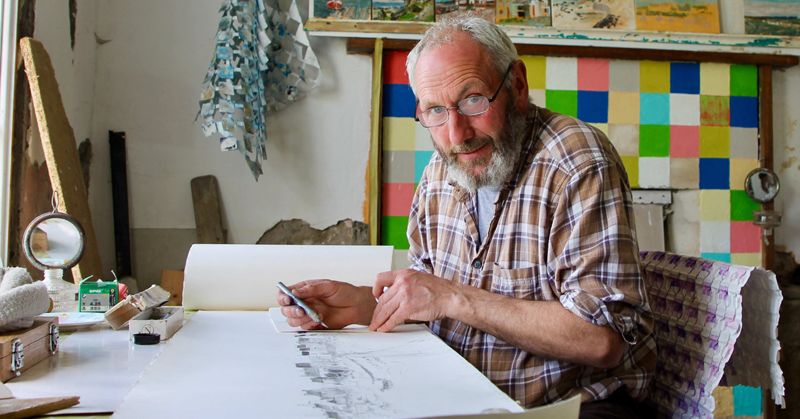 Donegal man Cathal Mac Fhionnghaile is set to feature in an insightful documentary film on Gaeltacht artists on Culture Night 2020.

Cathal will be one of the artists to share their story in Tearmann on TG4 on Friday 18th September at 8pm.

The film explores how the landscape, local customs and indeed the Gaeltacht communities themselves continue to influence a new generation of artists.

Cathal McGinley is from Inis Bó Finne; he was born whilst his family were still living on the island but was raised in Machaire Rabhartaigh overlooking his family’s home place.

Cathal obtained his degree in Sligo and later his MAFA in the University of Ulster.

Throughout this formal education, Cathal maintained a ‘grá’ for his home place and its people, customs, and heritage. This assimilation has happened over millennia, handed down, eventually reaching this artist who digests it and makes it visible through his own interpretation.

His sensibility is that of an islander and this unique perspective is demonstrated through his art. Cathal is a multidisciplinary artist; he paints, draws, sculpts and more.

Cathal’s projects include Athghabháil- Athghabháil denotes repossession, re-appropriation, repurposing, reconstruction. The ‘found objects’ from the shores of Inis Bó Finne metaphorically demonstrate a repossession of heritage. They are a comment on society’s destruction of our seas with plastic rubbish. In repossessing them, the artist also celebrates the native skills familiar to the island community such as fishing and the like that have been honed to a modern sensibility.

Bothóg is another project of McGinley’s – Cathal has positioned the bothóg as a place of refuge. In constructing this work Cathal has repeatedly folded tonnes of wastepaper by modular origami – a meditative, solitary, aeonian act. His dexterity and his chosen method of construction is recognition too of the artist’s skilled craftsmanship, a talent, and an aptitude he has engaged with since childhood.

Other artists who feature in Tearmann include: Áine Ní Chíobháin and Siobhán Ní Dhuinnín from Cork and Johnny Óg Connolly from Indreabhán in Connemara.

Other projects include composing musical settings for the poetry of Máirtín Ó Direáin for a projected song cycle currently performed with Liam Ó Maonlaí.

The documentary has been produced by Aniar Productions, in association with Ealaíon na Gaeltachta.