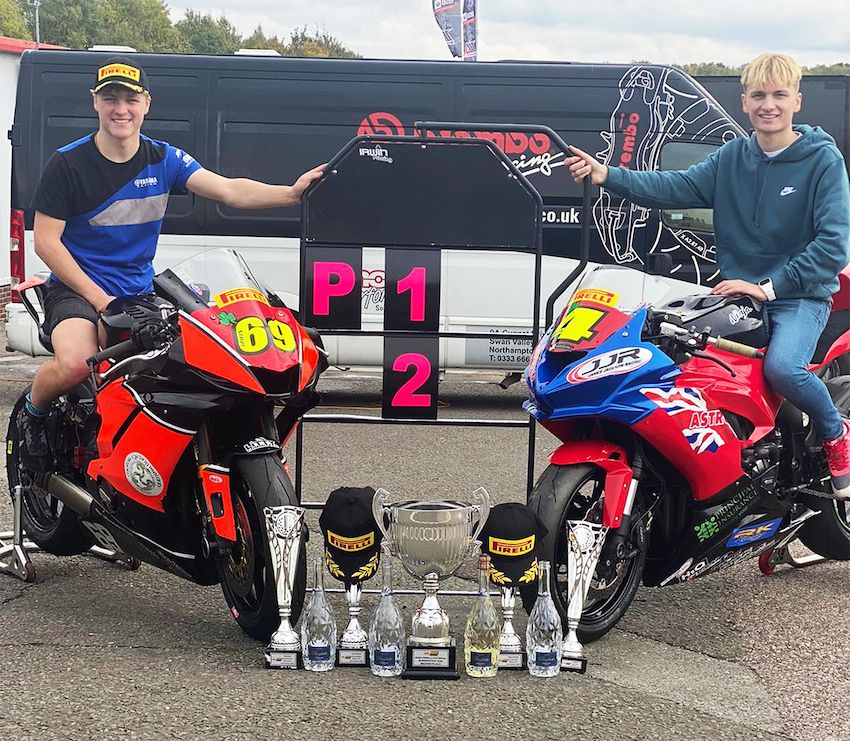 THE Irwin brothers, from Donegal, finished off their British Superstock 600 championship season with an incredible one-two in the final race of the year, as they took over the Brands Hatch podium to celebrate in style.

Rhys Irwin, the younger of the two lads from Kilmacrennan, took victory for the third time in his rookie season, while older brother Caolán finished second, to record the family’s first ever one-two in a race.

The weekend represented the best ever for the Irwin’s in British Championship action, as Caolán took his Astro Van Centre and Principal Insurance backed Kawasaki to pole position, third in race one and second in race two, while Rhys topped both practice sessions on his Irwin Racing Yamaha and added another win to his tally.

The last event of the season was just the second double header of the year, which made for a busy weekend for the young Irish racers.

Rhys went to Brands Hatch with a mathematical chance of lifting the title but with his real focus on securing second in the standings.

Caolán’s aim was to put in two more strong performances as he was safe in fourth place in the championship standings.

Throughout Friday’s two practice sessions, both Caolán and Rhys built up their speed to top the time-sheets in the closing minutes of each session, leaving both riders confident for qualifying and the races.

Caolán’s good form continued into Saturday morning qualifying as he took the first pole position of his Superstock career, but Rhys could not get a clear lap and despite his speed found himself in seventh place and off the front row for the first time since the opening event of the season.

Saturday’s first race began strongly for both riders as Caolán settled in to second place while Rhys quickly moved into fourth and on to the tail of the leaders before disaster struck.

Towards the end of the second lap the chain on Rhys’s Irwin Racing with Mondello Park Yamaha snapped, putting him out of the race, ending his chances of lifting the title and leaving him with an uphill battle to grab second.

Caolán ran at the front throughout the remainder of the race, including leading for four laps, but in the end had to settle for third as he lost out on the win by a tenth of a second.

For Sunday’s season finale Caolán started second but Rhys was relegated to thirteenth due to not setting a lap time in race one.

From the off Caolán again ran at the front while Rhys was steadily moving up the order and by half distance the brothers were sitting first and third.

The older Irwin allowed the second placed rider to pass him and was biding his time as he knew he had the speed to retake the lead in the closing stages, but was surprised to be knocked back to third by his brother.

Having taken second place, Rhys was quickly into the lead and with two laps to go the race was now between the top three.

On the last lap Rhys had the speed to hold on for his third win of the year while Caolán won a drag race from the final corner to make it an historic one-two for the Irwin family. The storming ride through the pack by Rhys was enough to grab back second in the championship and round out a fantastic weekend for the Irwin family, for Donegal and for Irish Motorcycle Racing.

“Where do I even start” said Caolán after race two, “Second on Friday, my first ever British Championship pole, third place in Saturday’s race and then second today, with a one-two for the Irwin’s. This weekend is the kind of weekend you dream of when you are training and putting all the hard work in and now that it has happened its a bit surreal.

None of this would be possible without everyone who helps us, particularly everyone in the Astro JJR team, Aly in Principal Insurance, J&S Accessories, RK Racing, my Mum and Dad, Wesley and everyone else who has pitched in this year. It’s me and Rhys on the bikes, but there are so many good people behind us and this is a great way to pay them back. Roll on 2021 and for once it will be a short drive home.”

Following the Race and Championship podiums, an elated Rhys said.

“Unbelievable day. To come from thirteenth on the grid and go one-two with my brother was just brilliant, especially after having started so far back due to my non-finish yesterday.

“It was great to take another win and having Caolán right behind me just put the cherry on top of the cake. It’s been a brilliant rookie season for me and it was nice to end the year on a high.

“On my dad’s birthday for both of us to be on the podium was brilliant. Thanks to all the team, Dad, Wes and Arnie and all of my sponsors, Mondello Park, J&S Accessories, Eustace in Joe Macs in Portadown, the McKee Family, the BSB organisers for their support and everyone else who has chipped in during the season.

The 2020 British Superstock 600 championship has finished with Rhys Irwin taking second in the championship and Caolán Irwin fourth.

Both riders have really cemented their growing reputations in the British Superbike paddock with their performances this year and they hope to have news of the next stages of their careers over the coming weeks.