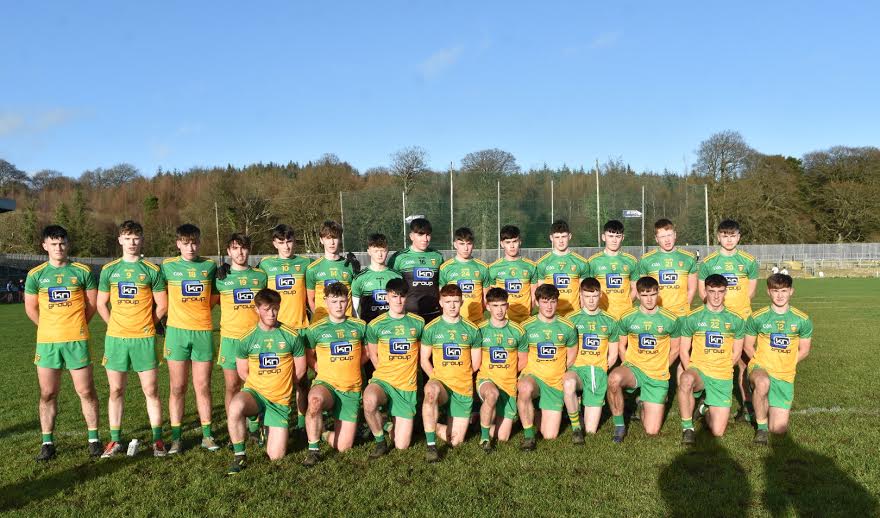 Donegal minors undone and out as Canavan edges it for Tyrone

TYRONE squeezed past Donegal in a tense and tight Ulster Minor Championship quarter-final in Ballybofey.

Canavan’s handful steered an otherwise wasteful Tyrone to victory. Tyrone hit 13 wides and it looked for a time as if Collie Holmes’ side might live to regret those misses.

However, two points by Canavan in the closing stages proved just enough.

Luke Barrett had this squad on the go for almost 14 months waiting on this day. Initially, Donegal were due to play Down, but a rejig of the format meant a redraw and a showdown with Tyrone. Defeat means their season is over and a long wait has come to an abrupt halt.

Donegal were in front for a long spell, but on a day when their own openings were limited, they just couldn’t get a sufficient foot hold.

Robbie McDonnell had a late shot blocked as Donegal set about rescuing the tie from the burning embers.

Eoin O’Donnell kicked a last-gasp point, but it was too late for the Tir Chonaill men to stage a come back.

The blue blanket overhead gave the look of a typical Championship day, but the feel was very different.

The browned trees behind at Drumboe and the ever-dipping temperatures provided a rather different backdrop for this sort of Sunday.

When Conor McGillion clipped over in the 12th minute, Tyrone led 0-3 to 0-2, but the Red Hands wouldn’t trouble the scoreboard operator for the remainder of the first half.

McDonnell arched over a fine point to bring Donegal closer and, after Luke McGlynn levelled from a free, the hosts hit the front in added time at the end of the half.

Donegal captain Drew McKinney created the opening with a majestic pass inside for Conor O’Neill. The Malin man called a ‘mark’ and duly converted.

McKinney had been a doubt coming into the game with an injury, but the Naomh Padraig, Muff player was passed fit.

Glenfin forward McGlynn suffered an injury before the original date of this fixture in October and only ditched the crutches in recent weeks but he too was able to take his spot.

Ruairi Canavan had a sight of the Donegal goal after shrugging off Kyle Murray’s attention, but the Errigal Ciarán forward – son of Red Hands legend Peter – riffled into the advertising hoardings behind Mark Gordon’s goal.

Tyrone had carved Donegal open at one stage in the first half, but Ruairi Campbell’s wires got crossed after playing a neat give-and-go with McGillion.

Tyrone ended a barren spell of 25 minutes when Canavan found the range seven minutes into the second half, with Donegal having momentarily extended the lead thanks to Senan Quinn’s persistence.

The visitors’ tails were up and the leveller by Canavan energised Tyrone, but Blake McGarvey restored Donegal’s advantage.

Goalkeeper Harry Morgan converted a ’45 and Canavan tacked on a point under fierce pressure to tip the scales going down the stretch.