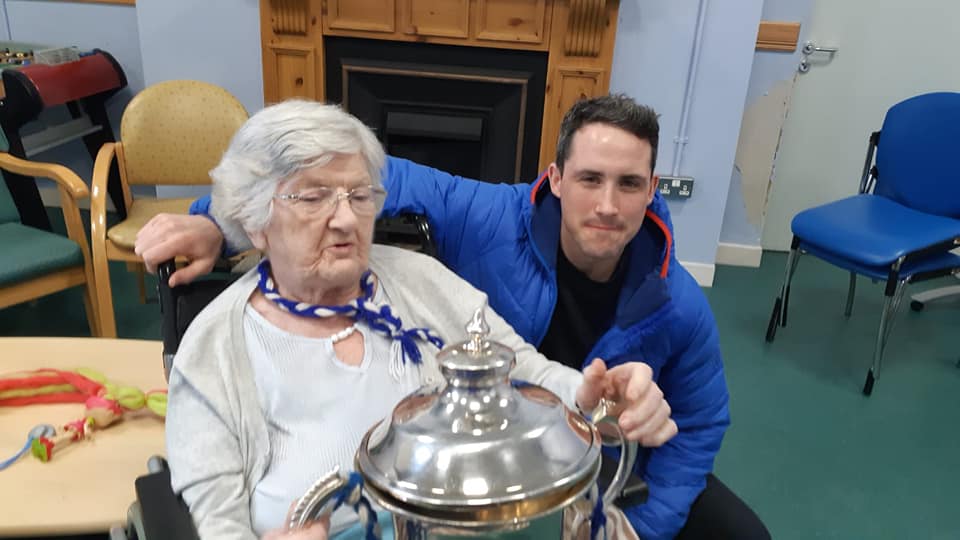 THERE is widespread sadness following the death of Margaret (‘Peggy’) McDyer.

Late of No. 2 Dr. Mc Closkey Crescent, Glenties and originally from Ballina, Peggy passed away on Tuesday at Letterkenny University Hosptial.

Peggy was the wife of legendary footballer Columba McDyer, who predeceased her in 2001.

In 1947, Columba McDyer became the first Donegal man to win an All-Ireland senior football championship medal. In 1947, in a famous final played at the Polo Grounds in New York, Columba played at centre-forward in Cavan’s win over Kerry.

Columba also played for Donegal and Sligo and lined out in the Railway Cup for both Ulster and Connacht.

It was while he was playing for Sligo that he met Margaret O’Donnell and the couple married before settling in Kilraine, Glenties. After Columba’s passing in 2011, Peggy moved to McCloskey Crescent.

She remained a fervent supporter of Naomh Conaill and attended the 2019 Donegal SFC final.

The club has paid tribute, saying:  ‘A native of Mayo, Peggy was married to the late Columba Mc Dyer, Donegal’s first ever winner of an All-Ireland Senior football medal when playing with Cavan in 1947.

‘The family moved back to Donegal and resided in the family home in Kilraine. Their association with the Naomh Conaill Club is well documented down the years. After Columba’s death Peggy moved to Mc Closkey Crescent.

‘The Club extends its deepest  sympathy to the Mc Dyer family at this sad times.

Peggy will be laid to rest at Kilraine Cemetery on Thursday following Funeral Mass in St. Connell’s Church, Glenties.