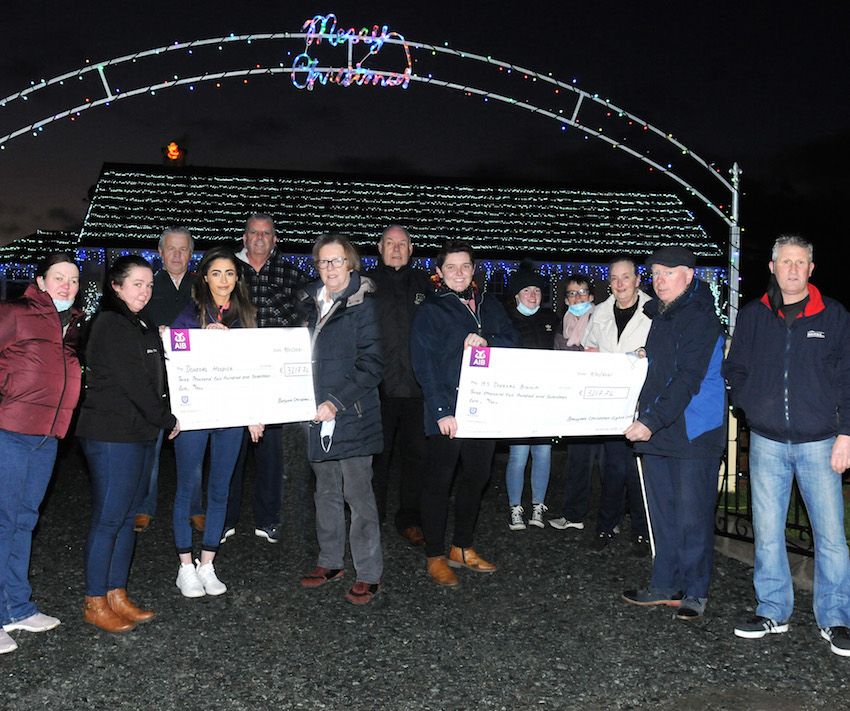 A spectacular display of 34 nights of Christmas lights at a house in Ballyare between Letterkenny and Ramelton has raised €6,435 for two charities.

Gerry Durning’s home was a huge attraction over the festive season for families and some even came twice!

The committee handed over cheques on Saturday evening to the value of €3,217.74 each to Deirdre Treaty on behalf of the Donegal Hospice and Christine Friel representing the Multiple Sclerosis Society Donegal Branch.

Gerry Durning, Sharon Friel, Nadine Friel along with Tommy Doherty, Pat McGinty and Brendan McGinty were all part of the fundraising committee.

It all started with an idea that Tommy Doherty had when he was passing by Gerry’s house one evening as the Christmas lights were going up.

“I just thought it was so difficult for charities to raise money because of Covid. So I asked Gerry would he be interested in doing something in that way. We had done fundraisers before so he said yes and there were two charities agreed.

“I chose the Donegal Hospice in memory of Seamus Corry and Rosaleen Rodden. Gerry picked the Donegal MS Society. He had been putting up the Christmas lights for three years but this was the first time that he was doing it for charity. It took a month for Gerry and Pat McGinty to put all those lights up so there was a lot of work before we put in the donation box for the first time,” Tommy said.

Tommy and Gerry were there for all 34 nights along with other committee members.

“It was very successful. I’m just over the moon with the amount of money raised. Everyone kept to the health rules with social distancing. People were very responsible and we didn’t have a problem the whole time that the fundraising was going on.

“The support we got from the public was great. Money went into the donation box every single night. Myself and Gerry would like to thank the Gardai for giving permission. We kept to the rules and Gardai were out with us to check all that and even made donations themselves.

“Santa was there every night and was always social distanced. But, the children could still make their requests for presents. Santa’s magic sleigh was there as well so there was plenty of entertainment” Tommy said.

It was a big commitment for the volunteers to be there from 5 p.m. to midnight but Tommy Doherty says for him personally it was a privilege to do it.

“With all the Covid news you know I was glad to get away over there for the evening to meet people. Some of the families came back a second time. They enjoyed it and there wasn’t a lot else going on. We would like to thank all the people who helped us out with sponsorship and especially everyone who donated to the two charities.

“It really was a wonderful display of lights and that’s down to Gerry Durning and Pat McGinty. Without Gerry it couldn’t have been done. Sharon Friel was there taking lots of photographs as well which helped too. To have raised over €6,400 and to be able to give €3217 each to the Donegal Hospice and the MS Society is something that we are all so happy about” Tommy said.