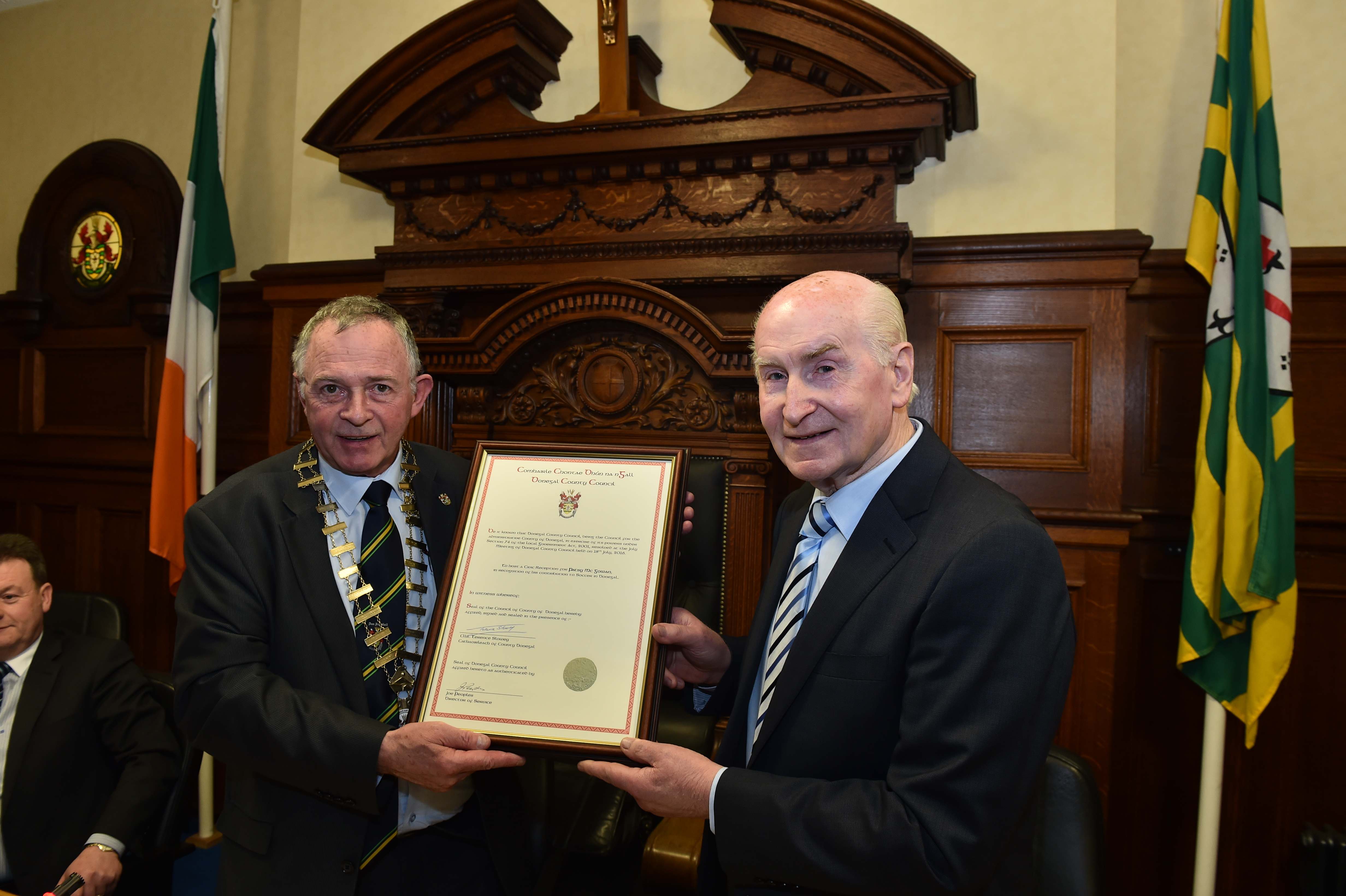 FORMER FINN Harps manager Patsy McGowan will be inducted into the Hall of Fame at the Donegal Sports Star Awards this month.

McGowan has been confirmed as this year’s recipient with the awards to take place remotely on January 29.

McGowan, a founder member of Finn Harps, led the Ballybofey club’s entry to the League of Ireland in 1969, after guiding their FAI Junior Cup win in 1968.

In 1974, McGowan was manager when Harps won their first – and, to date, only FAI Senior Cup.

He was just 16 when attended a meeting in the Twin Towns to form Harps in 1954.

Just 15 years later that dream became a reality and McGowan is credited with being the main driving force when Harps decided to make a daring move to apply to join the League of Ireland.

That project began in earnest in 1967. Patsy was Secretary and manager of the club at the time. He was manager when Harps won the FAI Junior Cup in 1968.

McGowan and others put a huge amount of work into the application and against all the odds Finn Harps were admitted to the League of Ireland in 1969.

They celebrated 50 years in the league in 2019. McGowan was in charge of Harps teams that qualified for Europe four times during the 1970s and won the FAI Senior Cup in 1974. He had three separate spells as manager and that’s a record in itself. 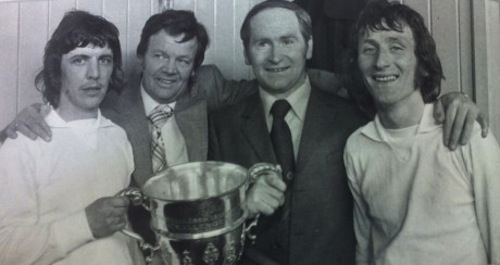 Players Paddy McGrory and Charlie Ferry with Fran Fields, Patsy McGowan and the FAI Cup in 1974

Patsy, who was manager at Finn Park for a combined total of over 12 years, also served as a club delegate on FAI committees.

The Donegal Sports Star Hall of Fame Award is an honour that the 82 year-old of age  certainly deserves after a lifetime of loyalty to soccer.

The induction will come after Donegal County Council already honoured him with a Civic Reception in 2017.

McGowan always stood up for the football grassroots when often it wasn’t popular to do so. McGowan is delighted to be joining a host of other high profile names from the soccer world that have been inducted into the Donegal Sports Star Awards Hall of Fame including Fr. Michael Sweeney, John Sheridan, Eunan ‘Busty’ Blake, Harry Blaney, Paddy Sweeney, Paddy Byrne, Fr. Willie McMenamin, Charlie Collins Snr, Phil McLaughlin, Hugo Doherty, Eamonn McDaid and Jim Sheridan.

The Ballybofey man will be the 45th Hall of Fame winner and the 12th from soccer.

The first footballer to receive the honour was Ramelton man Eamonn McDaid who was a member of the famous Swilly Rovers sides of the 1950s that reached two FAI Junior Cup Finals. Finn Harps can now claim links with four of the Hall of Fame winners.

The late Eunan Blake was a former manager while Fr. Michael Sweeney was a club administrator and Jim Sheridan captained Harps while McGowan was the boss at Finn Park.

“This is a great honour for me but I take it especially for the many football people that are no longer with us but put their bodies on the line to keep the sport in the 1950s and 1960s,” McGowan said.

“I was playing in those years and it was a dream of mine to see senior soccer coming to Donegal. A lot of people thought there wasn’t a chance in hell of it happening.

“I didn’t do it on my own but as Secretary I was determined to make it happen. Richie Kelly was with me when we were canvassing the clubs for support and meeting the national media to tell them about our plans.

“The media in Dublin got some shock when the FAI said yes to our application in May 1969 and three months later I was managing Finn Harps in the first ever senior League of Ireland game in Donegal.

“I was manager when we won the FAI Junior Cup the previous year so there had been some momentum building but it was just incredible to be playing Shamrock Rovers in that first match at Finn Park in August 1969.

“People talk about the FAI Cup win in 1974 and playing four times in Europe against Aberdeen, Everton, Derby and Bursapor but for me bringing League of Ireland football to this county and keeping it here for over 50 years it what satisfies me most.”

As a paler, McGowan was one of the best goalkeepers that the county produced in his time and he starred in the famous Summer Cups with numerous teams including Rathmullan Celtic.

That talent led to trials with English clubs including Everton, Tramere Rovers and Port Vale.

Donegal Sports Star Awards Chairperson Grace Boyle said the induction of Patsy McGowan into the organisation’s Hall of Fame was a fitting acknowledgement of the enormous contribution that the Ballybofey man had made to soccer in the County going back to the 1950s.

Ms Boyle said: “When people talk about the history of Finn Harps the first name that comes into your mind is Patsy McGowan. Even before that he was making a name for himself on the football field.

“Patsy had a dream to bring the League of Ireland to Donegal and did it very much against the odds nearly 52 years ago.

“As he said himself he loves the game and always will so we’re delighted that Patsy McGowan is our 45th Hall of Fame winner and joining those other legendary soccer men who have been honoured down the years.”