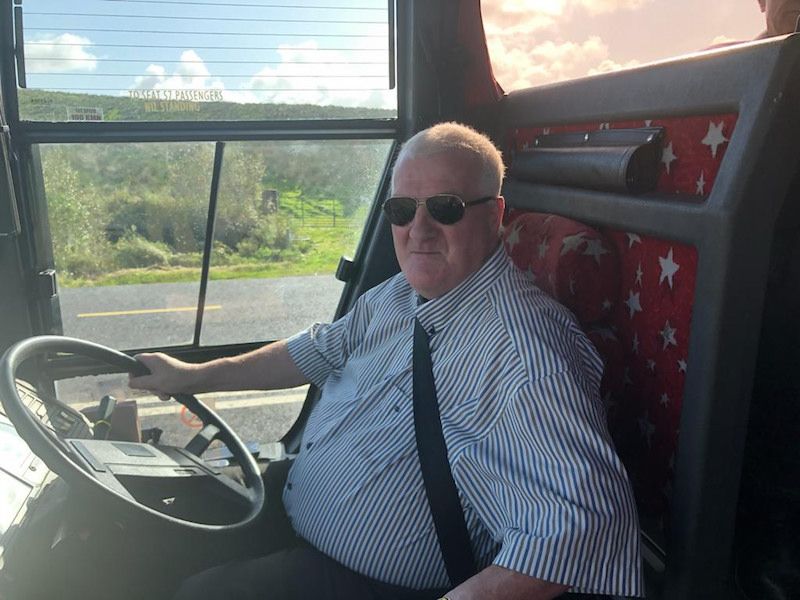 There wasn’t any second class seats on Tootsie’s bus, only the best.

In our minds, we sat on his bus for the longest time on Saturday morning in total disbelief that this popular man’s journey had come to an end on this earth.

Paddy McGettigan one of his closest friends and fellow workmate, a man not afraid to wear his broken heart on his sleeve summed it up.

Tootsie was everything “We’re just waiting for Tootsie to appear around the corner, climb into the bus, get himself sorted in behind the wheel, take a look down through the aisle through the mirror to check his passengers before firing up the Mercedes and getting the show on the road.”

Tootsie was known in all circles and by all age groups. I know this because it was my very youngest son who first introduced me to Tootsie nearly twenty years ago when we were on holidays in England.

It was a day that we visited the Motor Show at the NEC in Birmingham which was packed to capacity. While we sat on the floor eating chips I said to our three young sons that of all the people that pass by here today you will not recognise one of them.

I never thought much more about that statement until later that evening when we were on board the Norse-Irish Ferry from Birkenhead to Belfast and the boys were running around the lounge of the boat and landed back with the news that they seen someone they knew. Tootsie, “Tootsie who?” I asked them. “Tootsie Mc Gettigan” they replied. It’s probably someone who looks like Tootsie I suggested to them. Aye, one of them replied “someone that looks like Jim Mc Glynn with him too!” 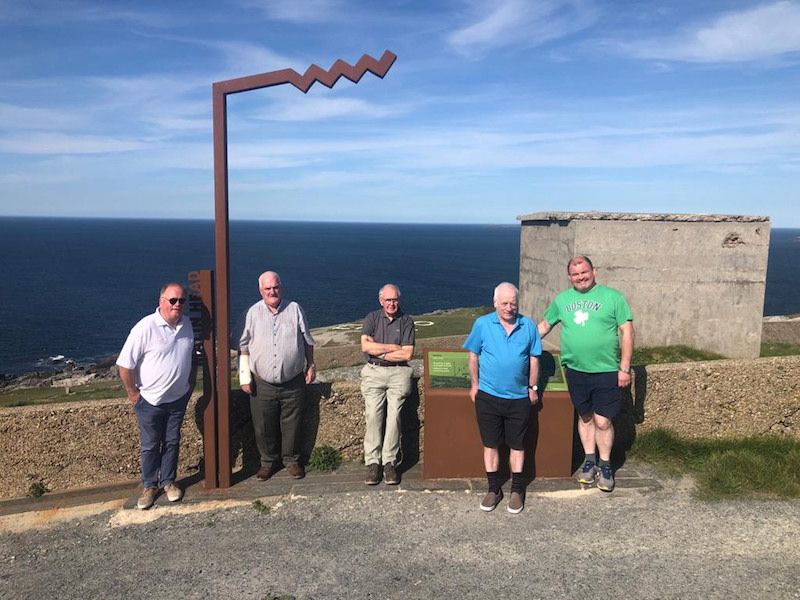 That evening we met up with this famous Tootsie who was with Jim Mc Glynn, Cathal Mc Gettigan and his son Kyle all returning from England on a bus buying trip. Jim Mc Glynn was our school bus man but our boys also knew Tootsie, Cathal and Kyle from Mc Gettigan Travel who did the school bus trips for the other part of the town.

Tootsie was a driver as was his father Tony was before him. Tootsie started out driving trucks for people like the late Jackie Houston in the quarry in Church hill (now known as Churchill Stone.)

Cllr. Ciaran Brogan recalls as a young fellow growing up at the Mountain Top of getting away for a day as helper with his neighbour Tootsie on the old tipper trucks enjoying the freedom of the road and the craic. Tootsie moved from driving trucks to driving buses when he teamed up with Cathal McGettigan.

If you ask in Letterkenny who is Eugene Hegarty then few might know who you’re talking about but mention “Tootsie” and the reply will be, “Ah Tootsie.”

After spending all his life driving he took his foot off the gas a bit as he headed into semi-retirement, but was very much involved in the management of the yard for Mc Gettigan Travel.

“There wasn’t a morning that busses were all sitting started and heated up and ready to roll when Tootsie was there,” a heartbroken Paddy Mc Gettigan reflected this week. 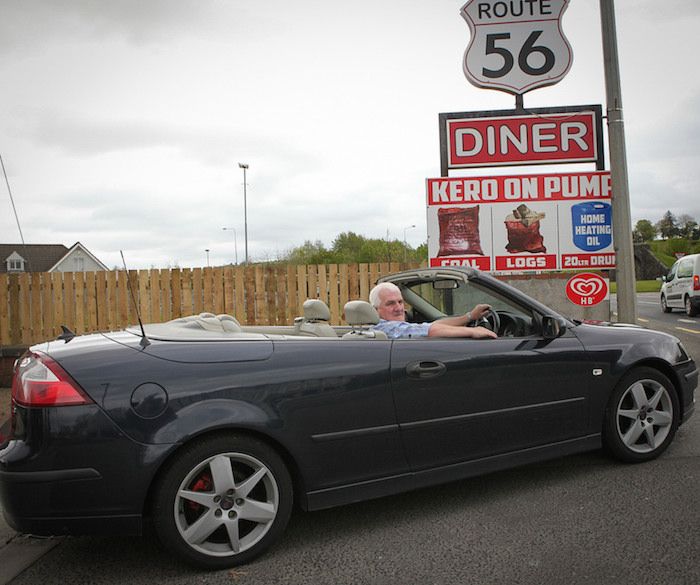 A proud Tootsie at the wheel of the Saab 93 convertible in 2014. Photo Brian McDaid.

A few years ago Tootsie, who was into his cars in a big way, bought a very special second hand Saab 93 Convertible at the right money and just went for it. Tootsie spent some money on new tyres and a few odds and ends to get it ready for the road. Living for the moment, Tootsie said he would only go topless (as in Convertible) for a short while! He decided to only tax the Saab for three months summer months. His plan was to enjoy the Donegal sun (when it shines) and by the end of summer when his road tax us up he planned to sell up and buy another Mercedes with a roof for the winter. 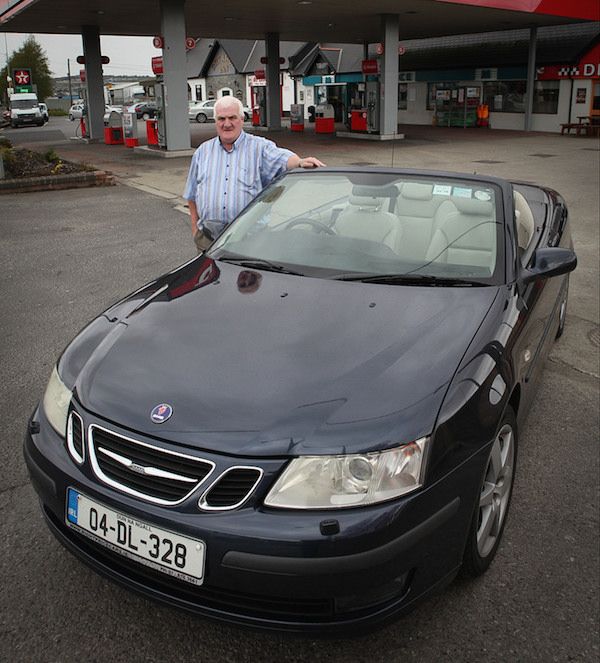 A proud Tootsie posses for a photos at his Sasb convertible in 2014 Photo Brian Mc Daid. 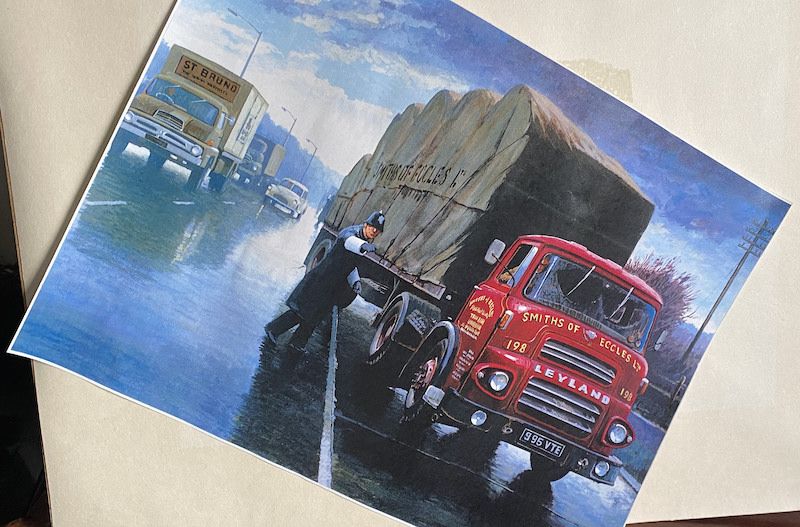 The old print given to Tootsie who made it into his journey on the road remembering his father in the early days.

As the lockdown loomed last year Tootsie phoned me with an idea for a wee project that he had in his mind. Kyle Mc Gettigan found an old print of two lorries that someone was throwing out. He gave it to Tootsie who landed down to me with it.

“Could you do a wee job on them two lorries for me?” Tootsie asked. He explained that his father had two lorries like this many years ago, a Ford Trader and a Leyland. He wondered if I could change the Leyland to have a tipping body on it?

With the lockdown looming and very little to do I said I would have a go at this. My photoshop became a garage workshop as I bought into Tootsie’s vision squaring off the body of the trailer unit to make it look more like a tipper. Then we started taking off some of the signwriting on the cab of the truck and replaced it with Tootsie’s father’s name. I wanted to put T. Hegarty and Sons on is as in Tony Hegarty that could have doubled up as Tootsie Hegarty as well but Tootsie was having none of it. A. Hegarty and Son it had to be as in Anthony Hegarty and Son. The final touch on this project was to send Tootsie in search of the number plate of his father’s old Leyland (That wee square of paper is still stuck to the window of my office where the summer sun has nearly faded it away with AIH 282 in Tootsie’s handwriting on it.) 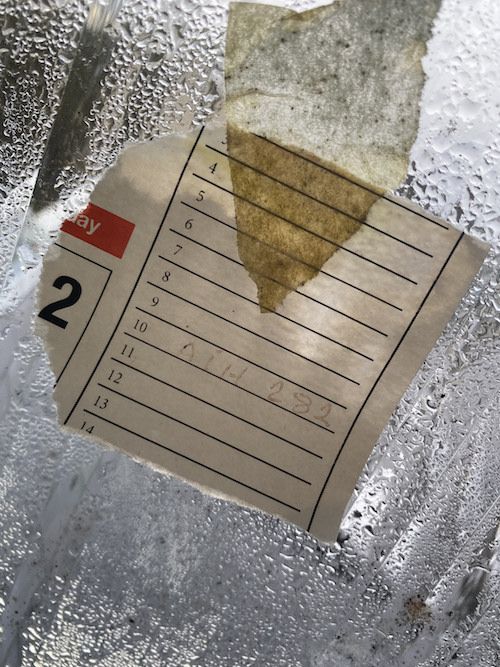 A small piece of paper still stuck to the window with the number of Tootsie’s father’s Leyland Truck . Photo Brian McDaid

Tootsie got the picture framed up and got a few copies made and ended up giving them all away to some of his family members who remembered the old lorries that his late father once drove. He called in to get one last print made a few months before Christmas for himself when he had everyone else sorted out. 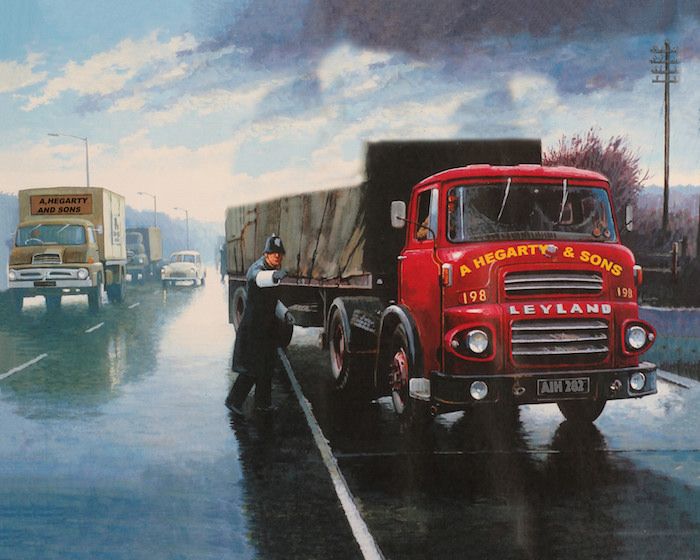 The old Leyland and a Ford Trader remodelled made to look like the old truck Tootsie’s father once owned.

For me, this wee project just summed up the person Tootsie was. He had the imagination to build on the smallest of positive gestures of an old print destined for the bin, who could make something very special, who was good to everyone but especially good to the ones that were good to him. 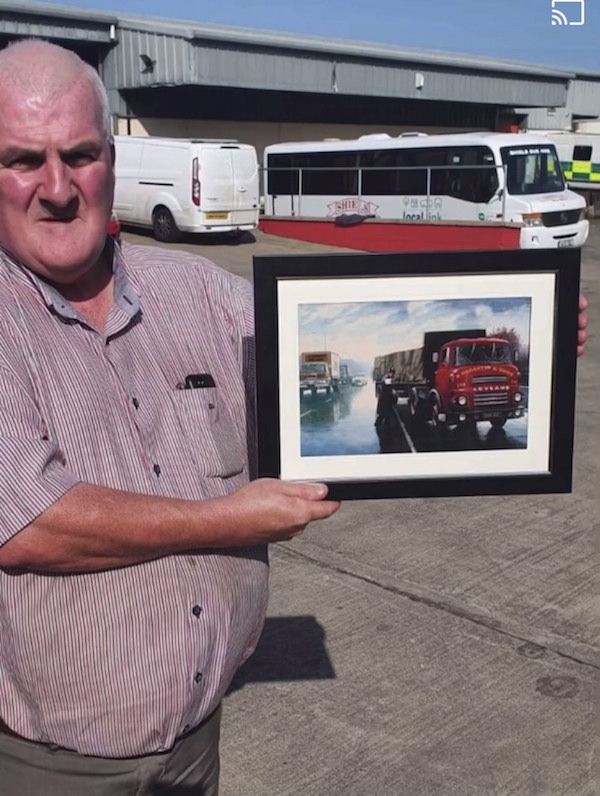 A proud Tootsie with a famed pictured of trucks similar to that of his fathers from years ago.

Tootsie would have been so proud of the way his old bus looked on the day of his funeral. A Mercedes Beaver 3 leading his funeral down the town. The sound of is diesel engine on idle coming and going through the cold January air. Two buses like two gateposts before the Conwal straight saying goodbye as Tootsie went on his final journey out of this world and on to the next. 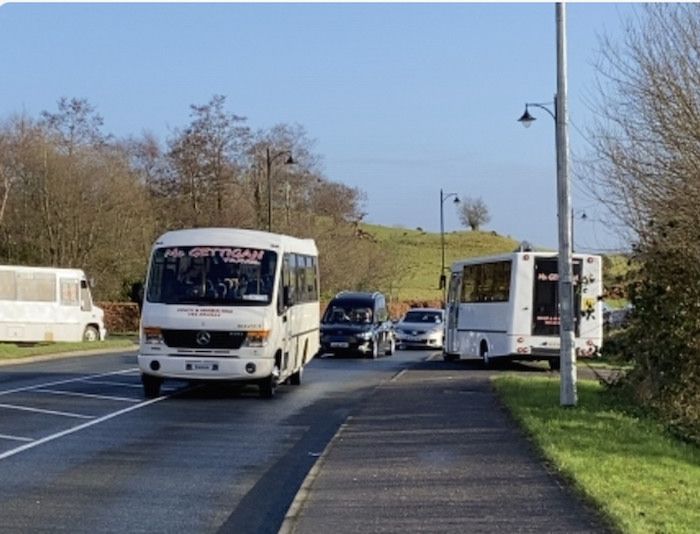 Final farewell, Tootsie funeral making its way through a guard of honour made up by some of the fleet of Mc Gettigan Travel last Saturday. Photo Brian McDaid. 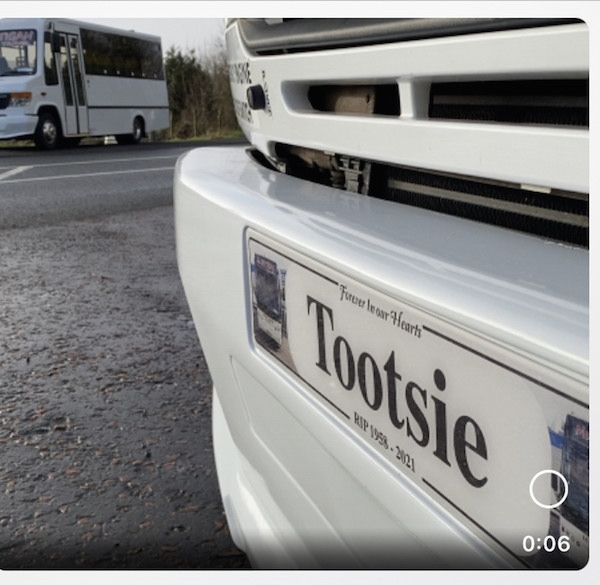 Mc Gettigan Travel busses with Tootsie name on the number plate on the day of his funeral. Photo Brian McDaid.