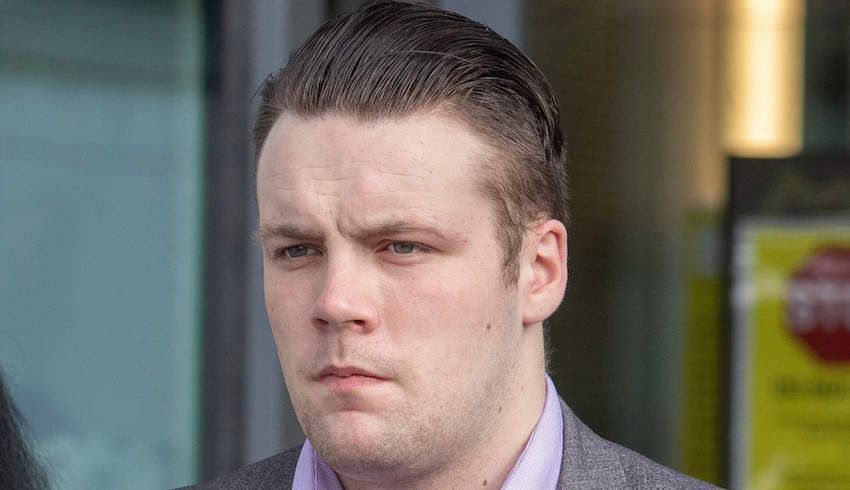 A young man who broke into a house in Creeslough and attacked a young couple was caught after Gardai matched his DNA to blood left on a wall in the house.

The court was told that at around 12.30am on May 9th, 2018, Sweeney opened an unlocked door at Birchill in Creeslough.

He went into the sitting room where he found the occupants Olivia O’Hare and James Fallon who asked him to leave.

Sweeney refused to do so and punched Mr Fallon a number of times before punching Ms O’Hare once in the head and pushing her backwards and she fell.

There was another struggle and Sweeney fell against a hallway wall leaving blood at the scene.

It was this blood which Gardai matched to Sweeney.

The couple called Gardai and gave a description of a male who was not wearing a top. Gardai remembered earlier calling to a nearby house and thought the description matched that of Sweeney.

He was arrested the following day but said he had no recollection of the events put to him but his DNA did match that of the blood taken at the scene of the burglary.

During interview, Sweeney said it was his blood so he must have been in the house.

Both Mr Fallon and Ms O’Hare did not appear in court but gave a joint victim impact statement.

They said that the incident had a huge impact on their daily lives and that they eventually moved to Cavan.

Mr Fallon said the attack happened just three days before his final exams at the Letterkenny Institute of Technology, he didn’t sleep well before the exams, fared badly and was forced to resit the exams.

The break-in and attack impacted most on Ms O’Hare as she had been the victim of a previous break-in and suffered from anxiety and depression as a result.

They also said they could not use public transport as they often saw the accused in public and avoided using the same bus.

Garda Aidan Gillespie told the court that Sweeney was arrested but said he had no recollection of the night in question and later admitted to being on alcohol and valium tablets.

However, Garda Gillespie said he interviewed him on a second occasion and said there was a difference between “night and day” in the two interviews saying that Sweeney was a gentleman on the second occasion.

He said he knew that Sweeney was now training and keeping himself fit, attended the Donegal Youthreach Programme and was living at home in Letterkenny with his mother.

Sweeney told the court “For the impact I had on their lives I’m very apologetic and I’m sorry for what happened to those people. I wouldn’t like that to happen to my family. I want to reach out and apologise.”

He also told the court that he had since become a father and wanted to be the best father he could for his son.

The court was told that the accused had 14 previous convictions before he was aged 18 but this was the first charge to come before the court since he had turned 18 years old.

Barrister Peter Nolan, instructed by solicitor Rory O’Brien, told the court that he was looking for mercy for his client saying he did not believe he will be back before the courts.

Describing him as a ‘pleasant and well-mannered young man’, Mr Nolan said he was asking the court to see the remarkable change in Sweeney on the genuine efforts he is making to invoke a lifestyle change.

The court was told that Sweeney is also taking an Access Course at Letterkenny Institute of Technology where he wants to complete a course in fitness and nutrition.

Judge Aylmer said that taking a most benign view of the circumstances of the break-in, he still placed the incident in the mid-range of such offences and one which merited a sentence of three years in jail before mitigation.

He noted that this was his first offense since attaining adulthood and the question arose if he deserves a second chance.

He said that because Sweeney had sought counselling and the manner in which he approached the court he would reduce that sentence to one of two years in prison.

He added that the court had a mind to second-guess the opinion of the Probation Service who placed Sweeney at a high risk of reoffending in the next 12 months.

Judge Aylmer said he would test Sweeney’s resolve to changing his life around and replace the two-year sentence with one of 240 hours community service.

However, he warned Sweeney that this is his final opportunity and last chance to prove himself and said the slightest level of non-compliance can see the sentence activated.

Addressing his barrister the Judge added: “He should consider himself extremely lucky the court has been persuaded by you to give him that opportunity.”

Mr Nolan replied: “I hope and I’m sure he will take it.”