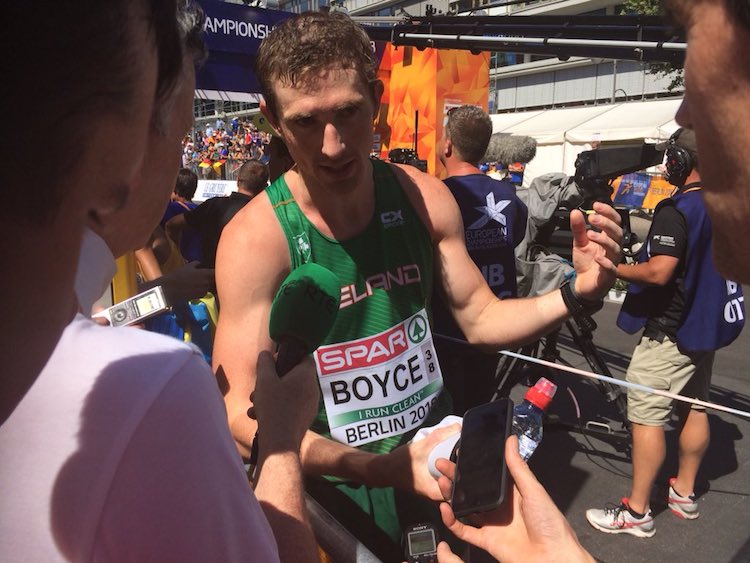 written by Chris McNulty May 14, 2021
FacebookTweetLinkedInPrint

BRENDAN Boyce will aim to lay a marker down for the Olympic Games on Sunday when he come pets at the European Race Walking Cup.

The men’s 50k walk starts at 7am Irish time and Finn Valley AC’s Boyce – already a two-time Olympian – is in good spirits as he heads for Podebrady, Czech Republic,

Boyce – who was at a training camp in South Africa in January – hopes to continue the form he showed with a 2:11:02 in a 30km race walk in December.

The Milford native booked his place at the Tokyo Olympic at the European Race Walking Cup in Alytus, Lithuania in May 2019 when he created new Donegal, Ulster and Finn Valley records in finishing in 3:48:10.

The preliminary start lists include 212 athletes from 25 countries.

At this event in May 2017, also at Podebrady, Boyce finished fourth.

He was inches from a medal after a superb effort that saw him sit third for a stage in the closing chapter of the race.

Then, Boyce finished in 3:49:49, pipped for bronze by Michele Antonelli of Italy in 3:49:07. It was Boyce’s first event under the Finn Valley banner.

The men’s 50km race walk this weekend is the last chance saloon for anyone needing a sub-3:50 time that brings a seat on the plane to Tokyo.

Among those hoping to grab a spot is the venerable Jesus Angel Garcia, the 51-year-old going for a potentially record-breaking eighth successive Olympic appearance later this summer.

Garcia is by far the fastest entrant with a 3:39:54 lifetime best although that time dates all the way back to 1997 – incidentally also at Podebrady.