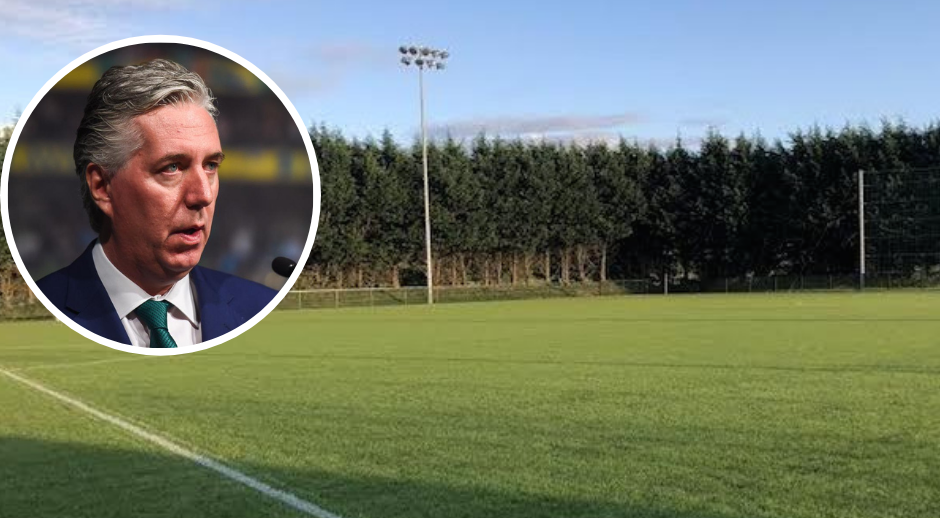 THE Donegal League has confirmed that it has received the outstanding tranche of a €50,000 development grant promised by deposed FAI Chief Executive John Delaney.

The money, for the development of the Donegal League’s headquarters at The Diamond Park in Ballyare, was promised by Delaney in June 2018.

Although an initial payment of €20,000 was received, the remainder had been unpaid. Following Delaney’s resignation from the FAI, after a review into the FAI’s financial dealings, there were fears that the figure would remain outstanding.

However, at this evening’s annual general meeting of the Donegal League, Treasurer Declan Sherlock confirmed that the €30,000 had been received.

“The money was promised by John Delaney and Nigel (Ferry, Donegal League Secretary) kept onto the FAI and we got the final €30,000,” Sherlock confirmed at the AGM, which was held via Zoom.

A new sand-based pitch with new floodlights was launched in 2018, while the development also included a new perimeter fence, dugouts, a pathway around the perimeter and ball stops.

Despite a year of Covid-19 restrictions, the Donegal League’s financial position was health.

Sherlock confirmed that, including the receipt of the outstanding FAI grant, the League had made a profit of €17,421.46.

The Donegal League has just over €51,000 to its credit and a term on loan, which was taken out for the Diamond Park works, is now down to a balance of just over €15,000. That amount is expected to be cleared by next summer.

A set of audited accounts will be distributed to clubs in the next couple of weeks.

It was certainly an AGM with a difference, given that there has been no football played since the last, which was also held via Zoom in September.

“Little did we think last year that we’d be having another AGM on Zoom,” Chairperson John Joe McCafferty said.

McCafferty paid tribute to Secretary Nigel Ferry and the Fixtures Secretary, Christina O’Donnell, for their endeavours in having a plan ready were the Covid-19 restrictions to have permitted a return.

Ferry, in his report said: “The review is short as we haven’t kicked a ball in earnest.

“We had intentions when we had the AGM in September that, if things improved before Christmas, that we’d get some kind of season in January.

“Things got worse. We had meetings with intentions of getting a shortened season, anything to get us going, but that didn’t happen either.

“The 2020/21 season will be remembered for all the wrong reasons, but it’s over now.  We hope that we never see the likes of it again. It was damaging, not just for football, but for all sports.”

The Secretary told delegates that Donegal League officials still plan to hold some form of celebration for the 50th anniversary of the League, which was formed in 1971.

He said: “We won’t let it go by without recognising it.”

Clubs have until 6pm tomorrow to cast their vote on a number of motions that were before delegates tonight.

Keadue Rovers have proposed that clubs with teams in the Sunday and Saturday Leagues name a squad of ten first team players, to be verified by the League. Any two of these ten could be used on a given weekend by the Saturday League team and the lost would be monitored on a monthly basis.

The League executive has also proposed new Covid-19 protocols, which are expected to be signed off by clubs.

Con McLaughlin, representing the Donegal Branch of the Irish Soccer Referees Society, asked the League to ensure that referees are not sent too far from their respective bases.

“We have been without football now as well,” he said. “I would urge clubs, if they have anyone interested in helping out then there are continuing online courses for new refers going on.”