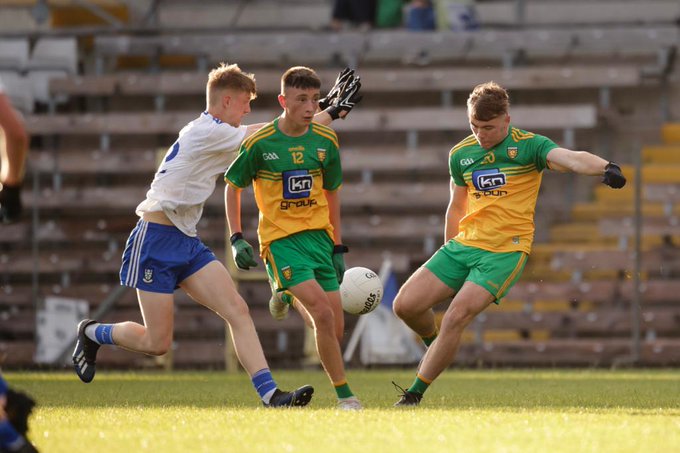 DONEGAL Minors advance to the Ulster MFC semi-finals after a gritty win over Monaghan in Clones on a night when they played 35 minutes with just 14 men.

Luke McGlynn’s goal, from a 16th minute penalty, helped Donegal to lead, but the dismissal of Ethan Friel, on a second yellow card, in the closing moments of the first half arrived as a major dent.

A 1-4 to 0-5 half-time lead was overturned inside 74 seconds of the re-start, with Monagan captain Stephen Mooney rattling three points in a blistering start to the second half.

The teams were level at the midway point of the second half, but sub Michael Callaghan arched Donegal in front again.

The lively Naomh Columba man, who also made a big contribution when scoring 1-3 off the bench in Donegal’s preliminary round hammering of Antrim a week ago, doubled his tally soon after to give his men a two-point buffer. 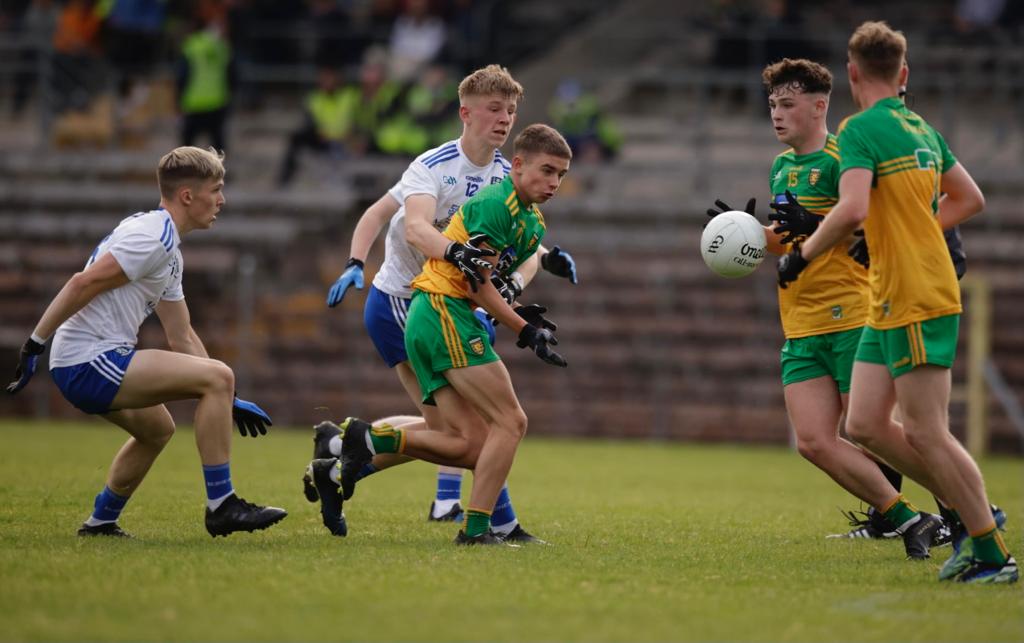 Donegal struck for the game’s opening goal in the 16th minute. A fine move ended with Paddy McElwee feeding Oisin Caulfield and the Na Rossa man was taken down by Declan McKenna, Monaghan’s goalkeeper. Referee Pat Clarke was left with no option and McGlynn confidently tucked into the bottom corner to McKenna’s right. McKenna escaped unpunished, the officials apparently unable to identify the culprit.

Sean Martin, Conor McGinty and McElwee stroked over early points as Donegal took the initiative against a fancied Farney side

McGlynn’s goal opened up a four-point advantage, but Mooney boomed over from long range. 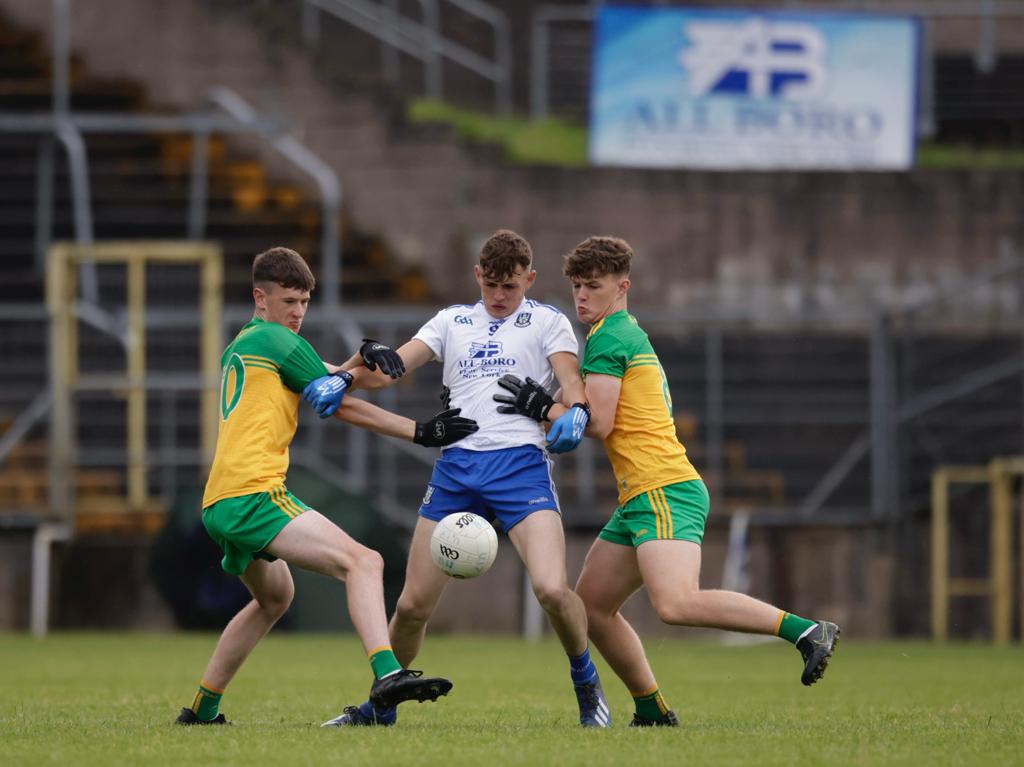 Disaster struck for Donegal when Friel was given a second yellow and the accompanying red for a foul on Cian Conlon just as the Carrickmacross forward was about to pull the trigger.

Mooney’s free ad Monaghan within two points and it took a wonder save by goalkeeper Aaron Cullen to keep Donegal in front.

Niall Rice superbly won the ball on the edge of the square and off-loaded to the better placed Mooney. From point-blank range, Money was denied by a brilliant stop from the Aodh Ruadh net minder; a moment that kept Donegal 1-4 to 0-5 ahead at the break. 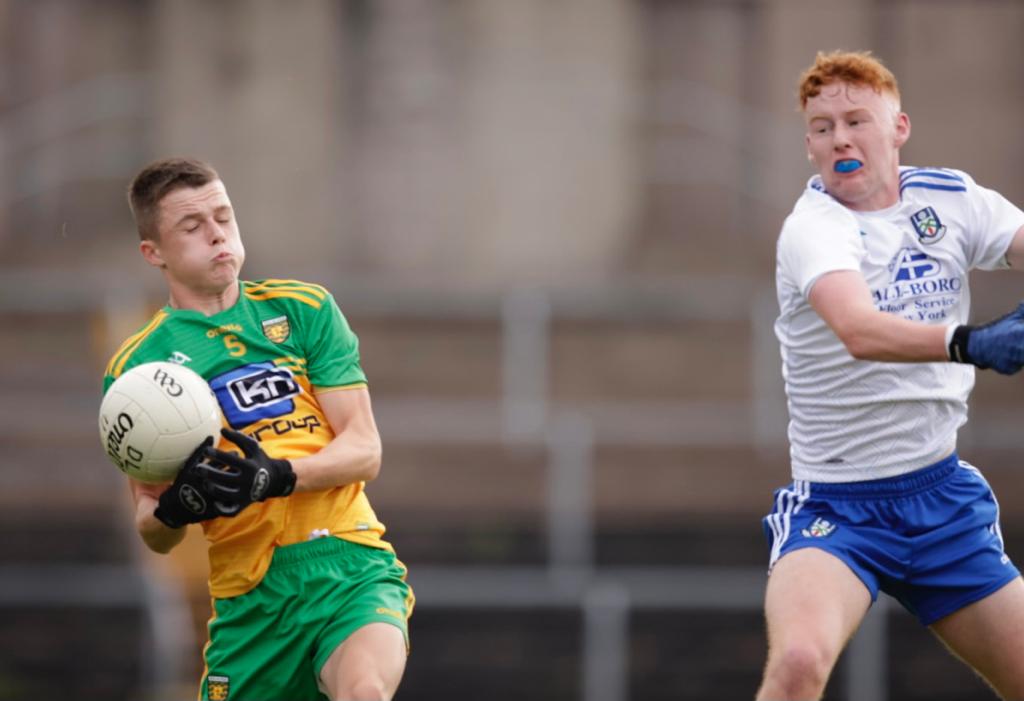 A week ago, Donegal scored four goals – two from McElwee and one apiece from Michael Callaghan and Kevin McCormack – in a 4-22 to 0-8 destruction of Antrim in Ballybofey.

McGlynn and Conor Reid briefly had Donegal ahead after Mooney’s purple patch, but the sixth of the night from Mooney levelled things at the water break in the second half.

Subs Callaghan and Kelly did their bits and Donegal held firm in the face of the inevitable onslaught.

Donegal will face Armagh in their semi-final.