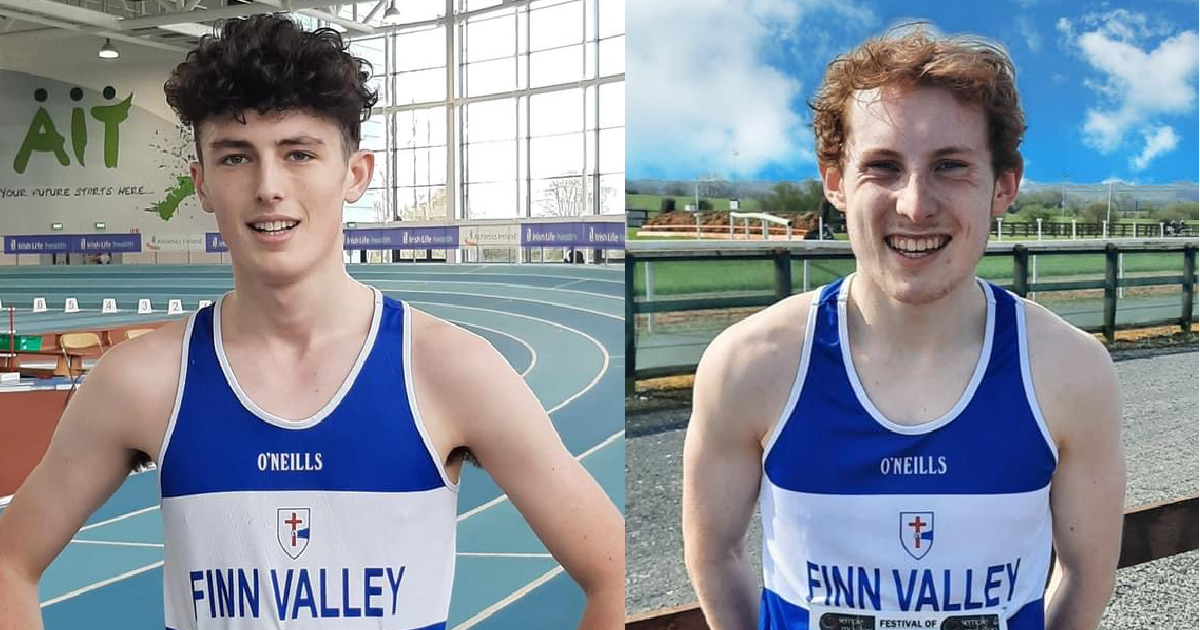 FINN Valley AC duo Ben Carr and Tristan Kelly are set to become the latest athletes from the club to take up scholarships in America.

As well as their academic advancement, the talented athletes will aim to progress in the sport too.

In March 20209, Carr was fifth in his age category at the Punta Umbria ETU Duathlon European Championships, where he set a 5k PB of 15:47. While Stateside, Carr will concentrate on cross country and distance running.

“I didn’t race in 2020 after the European because of the lockdown and that was disappointing because I was due to go to the World Championships in September,” Carr said.

“I feel like I’m back flying again. I’m building up again and I’m very much looking forward to going over to America now. I’m excited. I’ve been in touch with the coach and the people out there. I had a similar offer before when I did my Leaving Cert, but the reality hit and I didn’t go.”

Since joining Finn Valley AC, he has worked under experienced coach Peadar McGranaghan. His work at Finn Valley has readied Carr for the big move.

Carr, who will be studying physics, said: “Peadar is a saint of a man. He was there with me in good times and bad. Peadar is so level headed and is able to guide through bad times and food.

“I won an All-Ireland ‘B’ in 2017, but the A’s are the ones I want to be targeting now. We had a great group over the years with the likes of Adam McGranaghan, Odhran O’Donnell, Mitchell McLaughlin, Jonny McLaughlin, Calvin O’Brien, Owen Bradley and Johnny Connolly. In the later years, Carl McGinley and Lee Breslin came in and Pauric McKelvey too.

At Trevecca, Carr will work under coach Austin Selby.

He said: Everything has fallen into place and I can’t wait to get started. I’m dying to get back into competitive running again now.”

Kelly, who will study history, has been at Finn Valley AC for the last two years and is ready for the big trans-Atlantic voyage.

He said : “I’m just over the moon. Training has been going great and I’m just looking forward to the season ahead and hopefully getting some success. Training has picked up.

“It’s been a huge lift from what I would be used to, but I want to see what I can accomplish. I’m excited. It’s exciting to be looking forward to meeting new people, seeing new faces.”

The Covid-19 shutdown denied Kelly a chance to fulfil some potential over the last 16 months.

He said: “Covid ruined our competitions that we could have won, but I’ll be grateful for the time I had with them. We had big plans. Easily, we’d have been top three in Ireland. It was a great group.

“I joined Finn Valley and have never felt more at home in a club. They have all made me feel so welcome and the one thing I love here is the unity.”

“I want to see where running takes me. I have a lot of hard work ahead in the next four years, but I’m ready for it.

“This is a lifetime chance. I’m so nervous, but I’m over the moon too.

They will follow a long line of Finn Valley AC athletes who have gone down the scholarship route.

Since Camilla Harron went to Arizona University in 1985, a succession of others have followed.