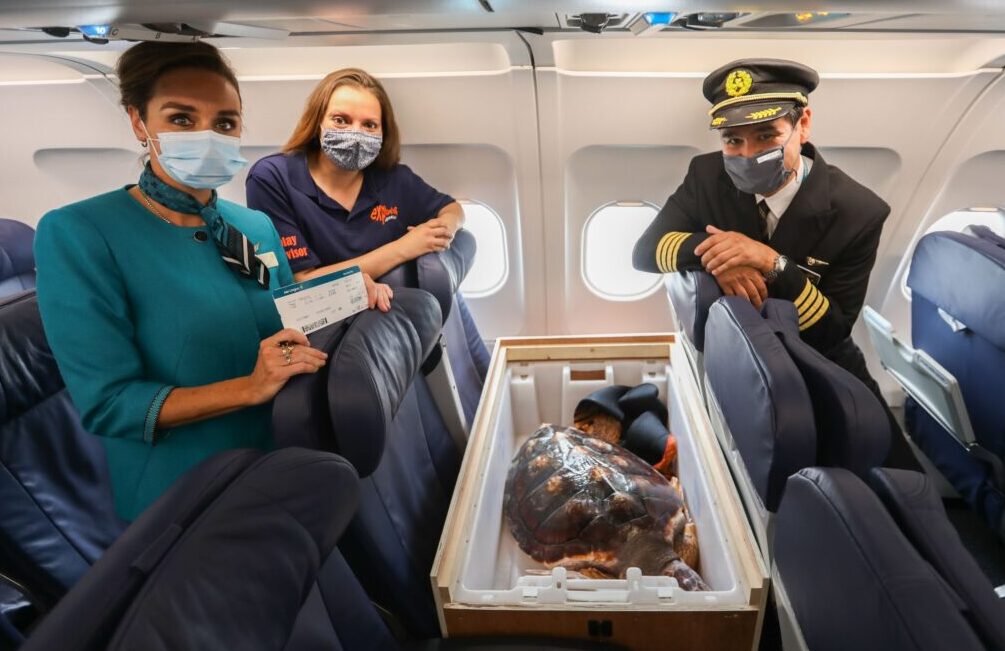 A loggerhead sea turtle discovered in Co. Donegal in 2019 will soon find sanctuary in the sun.

Now 3 years old, Julius Caesar, ‘JC’ to friends, was found washed up on a beach at Rosbeg in January 2019 when he was just 9 months old.

Thought to have been caught up in the wrong current and swept along the gulf stream, he was suffering from hypothermia, stunned by the cold water, and weighed just a few hundred grams.

Loggerhead sea turtles are an endangered species and thrive in a warm climate.

Discovered by a local family the Johnstones, JC was named for his fighting spirit and was brought to Exploris where he has since been recuperating in a tropical tank at the Exploris Aquarium, in Portaferry Co. Down.

He has enjoyed a diet of fish mixture, squid and gel in preparation for his voyage to Tarifa Wildlife Recovery Centre (Centro de Recuperación de Fauna Silvestrede Tarifa) in Gran Canaria. 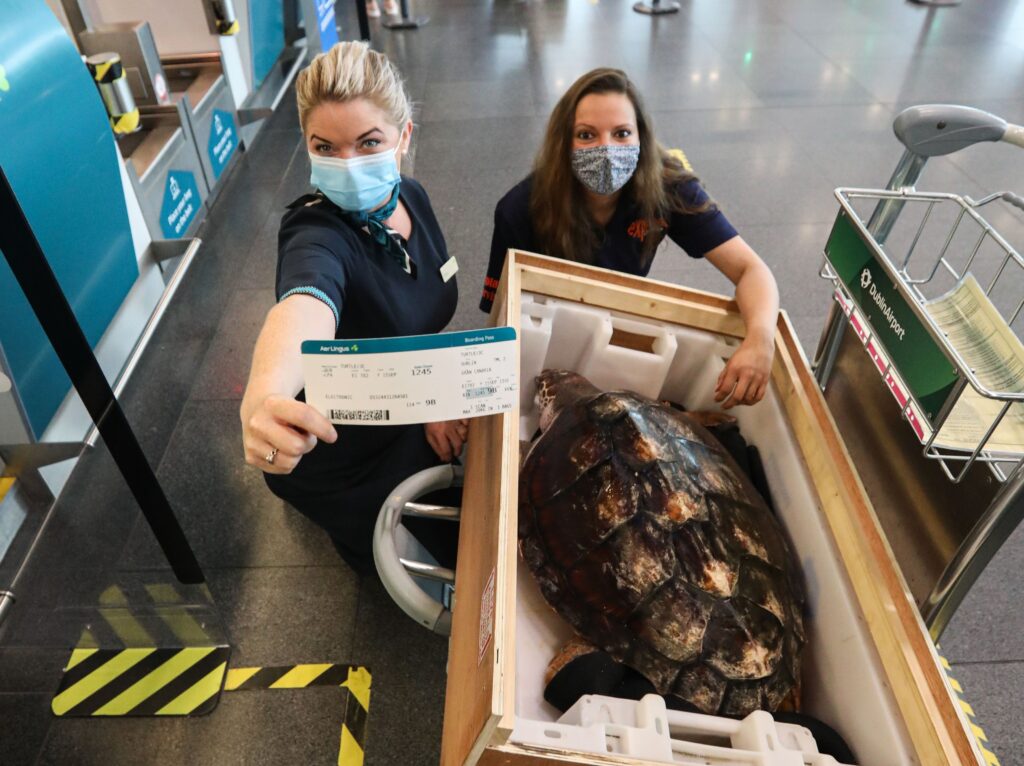 JC will travel in the cabin in a specially designed waterproof crate, accompanied by his minder Portia Sampson, where he will be warm, secure and can be monitored at all times.

Speaking on the repatriation, Aer Lingus pilot, Captain Peter Lumsden, commented: “It is our pleasure to welcome aboard a very special passenger today and to ensure the safe transportation of JC the Turtle to Gran Canaria. Since they first got in contact, Aer Lingus has worked closely with the team from Exploris Aquarium and our Maintenance & Engineering and Ground Operations teams to ensure that all JC’s needs are met as we complete this important mission.”

“Keeping the turtle’s temperature above 19 degrees is critical to his wellbeing and he requires regular monitoring and shell lubrication so placing him in the aircraft hold was not an option. His specially designed crate will be securely strapped across a number of seats in the cabin.

“Like all of us on the flight today, I’m sure he is looking forward to the warmer climate upon landing.” 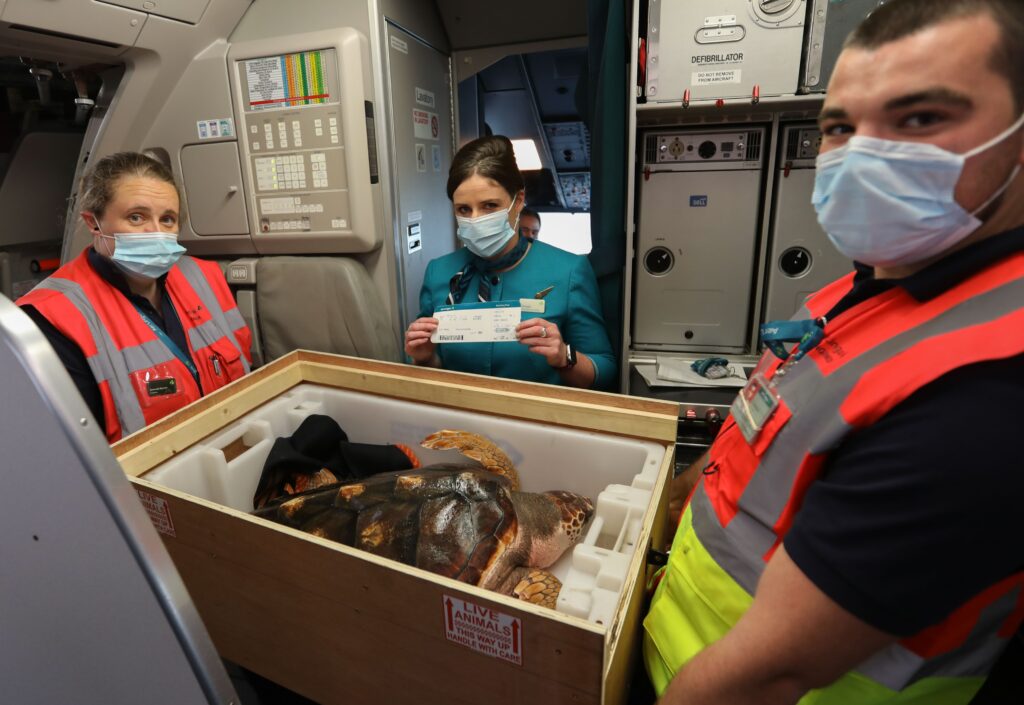 Upon arrival in Gran Canaria, JC will be under the care of veterinarian Pascual Calabuig of the Tarifa Wildlife Recovery Centre who will oversee his acclimatisation to the warmer weather and monitor his behaviour, feeding and physical condition before releasing JC back into the sea later this week.

Surprisingly, JC is not the first turtle that Aer Lingus has repatriated. Another rogue loggerhead turtle, Leona, was found in Co. Clare in 2013 and transported to Las Palmas, Gran Canaria by Aer Lingus in December 2014.

Loggerhead turtles are a vulnerable and endangered species and their numbers are in decline in the wild.

According to the World Wildlife Fund (WWF) they are ‘the living representatives of a group of reptiles that has existed on Earth and travelled our seas for the last 100 million years’. Loggerhead turtles are expected to reach 100kg by the time they become adults. Their natural habitat requires warm shores. 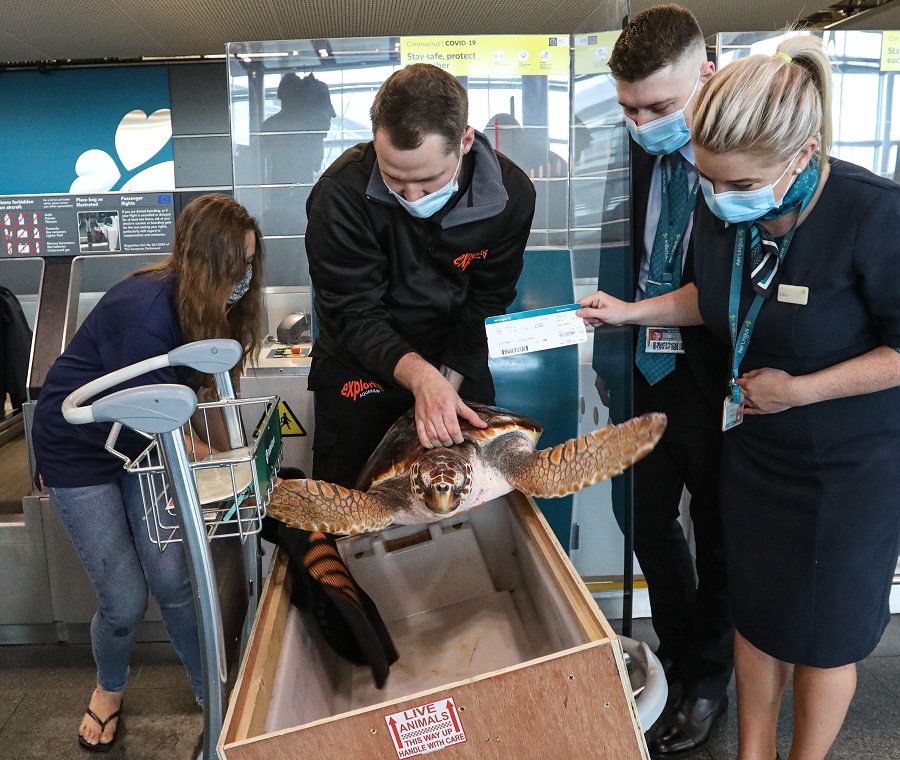