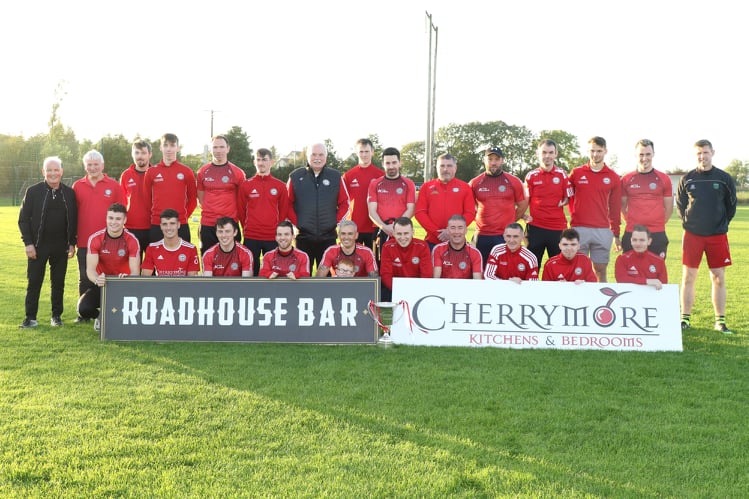 CAPPRY Rovers were finally presented with the 2019/20 Donegal League Premier Division this evening, drawing to an end a controversial saga.

A lengthy appeals process only came to a conclusion recently with Cappry crowned as champions.

Donegal League fixtures secretary Christina O’Donnell was in Cappry Park to present the club with the trophy.

“We’re just glad to get the Cup and that’s it closed off now,” Cappry Rovers player-manager Paddy McNulty said.

“We have the Cup and the medals; we’re proud of what we’ve done and we’ve made history for the club. We’re delighted.” 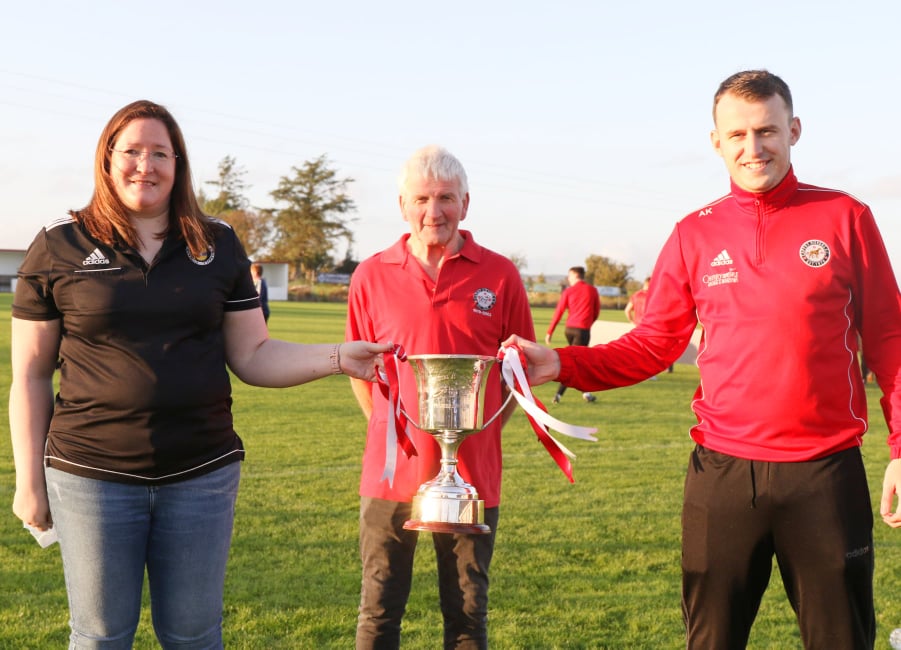 A long-running process saw FAI overturn a decision of the Ulster FA to uphold a Kilmacrennan appeal against the Donegal League’s decision to dock Kilmacrennan three points.

The Donegal League deemed that the Lurgysiders played a player they believed should have been serving a suspension in a 3-2 win over Cranford in August 2020.

After the FAI ruled in Cappry’s favour, Kilmacrennan took the matter to arbitration.

The arbitrator, Brian Murphy BL,  deemed that Kilmacennan had played an ineligible player in their game against Cranford and, accordingly, pulled that the points be awarded to Cranford.

That decision meant that Cappry were crowned as champions, the silverware and medals making their way into their possession this evening. It is Cappry’s first time to have their name inscribed on the trophy.

The 2021/22 season has already begun with Cappry sealing a place in the area final of the Brian McCormick Cup.

The defence of the Premier Division gets underway on Sunday-week when they welcome another of the contenders, Kildrum Tigers.

McNulty, who has now won Ulster Senior League and Donegal League Premier, First Division and Second Division titles, said: “Defending it is the aim, but this is one of the hardest Leagues I’ve been in.

“We’re looking forward to getting the League underway against Kildrum in a couple of weeks’ time.

“We’ve done a good pre-season. We did that because of the long lay-off, we’ve been unbeaten in the Brian McCormick Cup and we’re looking forward to getting the League season started now.”

Ms O’Donnell, on behalf of the Donegal League, also paid tribute to Niall Patton, the long-serving secretary of Cappry Rovers who recently vacated the role after 43 years.