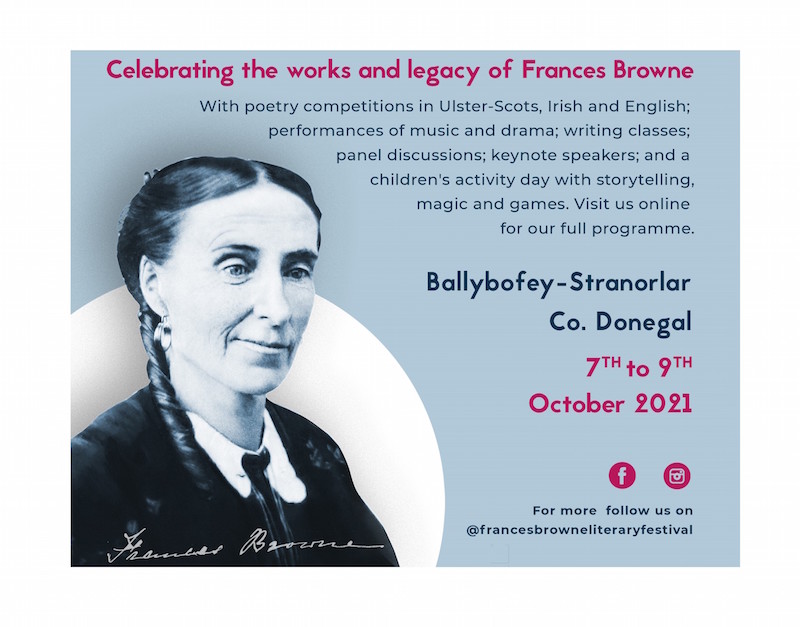 Frances Browne – A Frances for everyone

The inaugural ‘Frances Browne Literary Festival’ takes place this week from the 7th to 9th October with events taking place in Ballybofey, Stranorlar and Raphoe.

Frances Browne was an internationally celebrated poet, novelist, essayist, and writer whose life and work is still impactful and relevant today. Here we speak to Shirley-Anne Godfrey, a playwright and scholar, who was inspired and influenced by Frances throughout her career.

Known as “The Blind Poetess of Ulster”, Frances Browne was born in 1816 on Main Street, Stranorlar. One of many siblings, Frances would form a close and life-long bond with her sister Rebekah who travelled with her for years as a scribe and confidante.

Despite being blind from 18 months due to small pox, her disability did not inhibit her hunger for education and learning, explains Shirley-Anne. “She didn’t go to school regularly but her friends would lend her books and her siblings would read to her in exchange for doing their chores around the home.

“Frances showed signs of high intelligence and rampant curiosity from a young age. She had a remarkably retentive memory, she would know whole books off by heart and she would be able to tell them as stories to the other children. She was interested in history and went on to write about events in Russian history, European history, and the French revolution and about societies such as Native Americans and the Chinese Empire.

“Perseverance, dedication and a wealth of imagination were key components in her drive to succeed. This drive influenced her decisions to leave home and move to Edinburgh, and later on London, to achieve her ambitions of writing”. A decision, which Shirley Anne Godfrey believes, shaped the rest of her life.

“Frances Browne was a strong model of a female writer who pursued her work outside of the norms of the time. She was dedicated to her work until the day she died and refused to let her many obstacles and challenges overwhelm her,” says Shirley-Anne Godfrey. 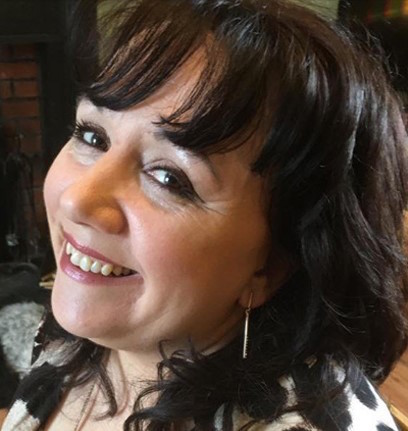 Reflecting on Frances’ struggles as a writer; chiefly her dependence on a scribe and the financial cost of that, Godfrey believes that these struggles resonate strongly with her modern female counterparts who continue to depend on others such as another person for childcare purposes.

Frances’ contribution to literature was forgotten through time but a recent regeneration of interest in her life and career has re-invigorated scholars, (from as far away as Japan and the United States), historians, and people in her locality to take another look and celebrate the phenomenal life she led and the breadth of writing she created.

Godfrey believes that some of the factors which might have lead to her falling through the sands of time could be that she was in a male-dominated profession and that the genres she chose to write in might have been considered ‘Old-Fashioned’ at the time such as fairy tales and children’s novels.

Another potential influencing factor in Frances’ erasure may have been her complex identity. Frances was Irish, Presbyterian and of Ulster Scots descent. And because Frances does not fit easily into a historical concept of Irishness and was non-sectarian in her depiction of Ulster life, Shirley Anne Godfrey believes that this may be why she has not been fully embraced as an Irish writer or as an Ulster Scots writer.

“Frances was very aware of the layers of society she was surrounded by in her father’s post office. This complexity is particularly prevalent in ‘The Legends of Ulster’ through the dialogue, vocabulary, and sentence structures she uses including English, Hiberno-English, Ulster-Scots and colloquial phrases transcribed phonetically from Gaeilge. She embodies all of these elements in one person and is therefore an incredibly important touchstone in the quest for a pluralist and multi-cultural Ireland.

“Frances had the incredible gift of being able to identify with all walks of life and commonly sympathizes with the underdogs of society showcased throughout her evocative and moving works. With her imagination, she could see more than most sighted people and with her broadened mind, she could allow herself to roam the world in ways many sighted people couldn’t.”

Frances, through her complex identity and imaginative writing techniques has come to mean many things to different people and Shirley-Anne was advised to find ‘her own Frances’ and through her research and innate instincts as a playwright she has done so in her biographical play about Frances “In My Mind’s Eye”.

‘The Legends of Ulster’ play will be performed by a Donegal cast for the first time in the Balor Theatre on Thursday night (7 Oct) as a homecoming of sorts to honour Frances and the impact she has had on modern writers and modern women.

“A fiercely independent woman who was necessarily dependent on others resonates with people from all backgrounds and cultures. Through her life and work she has, no doubt aided many to acknowledge, accept and overcome their vulnerabilities” concludes Shirley Ann.

See Frances’s story brought to life through the eyes of emerging Irish playwright Shirley-Anne Godfrey on Thursday and Saturday night (October 7 and 9) with the performance of ‘The Legends of Ulster’ at Balor Arts Centre, Ballybofey and on Saturday (October 9) a reading of “In My Mind’s Eye” at An Grianán Theatre, Lettekenny. For more on the Frances Browne Literary Festival visit www.francesbrowneliteraryfestival.com or follow on Facebook and Instagram. This event is supported by Donegal County Council.

Frances Browne – A Frances for everyone was last modified: October 4th, 2021 by Staff Writer
Facebook0Tweet0LinkedIn0Print0