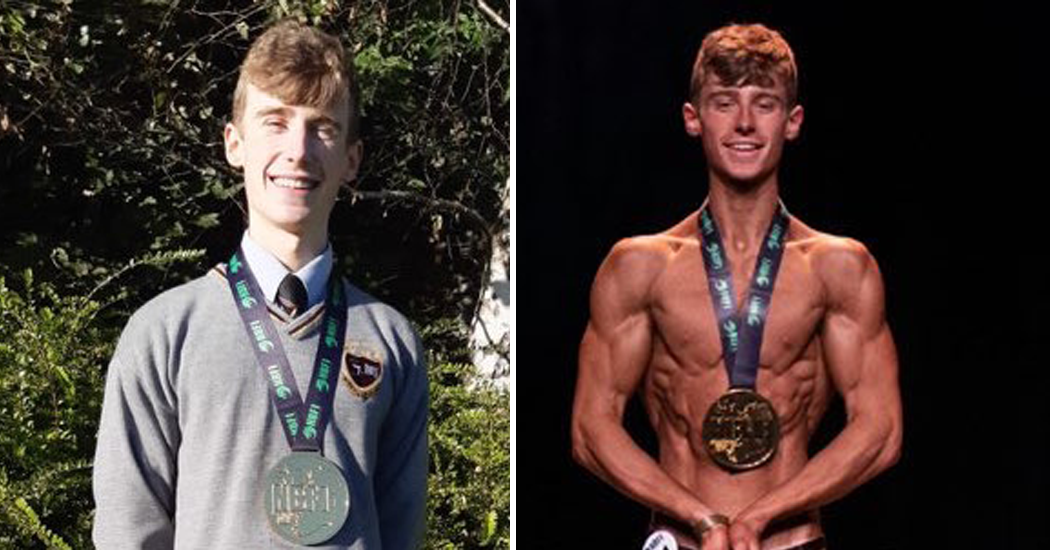 Student Tommy ‘builds’ for the future with incredible body transformation

Most 16 or 17 year old young men found it difficult to pass the time during the various Covid lockdowns.

Marathon sessions on Playstation between FIFA and Fortnite was a saving grace for many.

The now Leaving Certificate pupil at St Eunans College in Letterkenny has always had an interest in sport.

His parents Robert and Mary always placed an emphasis on keeping fit and a self-built home gym in the family garage was a welcome distraction between announcements of more social distancing and mask-wearing.

But to say things snowballed a little for Tommy in the family’s home gym would certainly be an understatement.

That transformation was recognised by the judges at the Natural Bodybuilding Federation of Ireland last week when Tommy was crowned U19 National Champion at the Firkin Crane Centre in Cork. 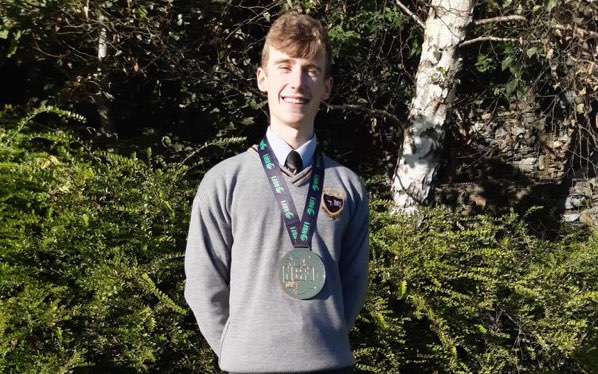 Tommy in his school uniform with his winner’s medal!

“I always liked to keep fit and deep down from an early age I always liked the idea of body-building and seeing how much I could push myself and to see my body transform.

“We all had plenty of time with the lockdowns and my family were very supportive when I started doing it seriously,” he said.

Seeing Tommy in the grey uniform of St Eunans, you would never guess that beneath the tailored shirt and jumper in English class was the sculpted physique that brought him first place in his chosen sport.

He admits that there was no secret sauce to becoming a bodybuilder but simply hours, hour and more hours of hard work – both cardio and weights.

After his home gym he went to Adam Speer’s gym in Bomany before becoming a regular at the Aura Leisure Centre in Letterkenny.

Daily workouts consisted of 6.30am starts on the exercise bike at home before school and then to either Speers or the Aura after he had finished his homework.

And when it came to food bills, let’s just say that he might owe his parents a little when he finally choose a career and gets a job.

His ‘bulking’ period saw him consume an average of 3,500 calories daily.

Those meals were all high in protein and carbs with lots of rice, chicken, fish, pasta and mince.

Breakfast was usually eggs, lots of toast and cheese and his school lunchbox usually contained at least three ham rolls!

For most of us unfamiliar with the world of bodybuilding (and that is most of us!), there’s an awful lot more to the sport than just bulking up and lifting weights.

Posing is a huge part of the sport and that doesn’t just mean flexing as hard as you can until you nearly burst a blood vessel. 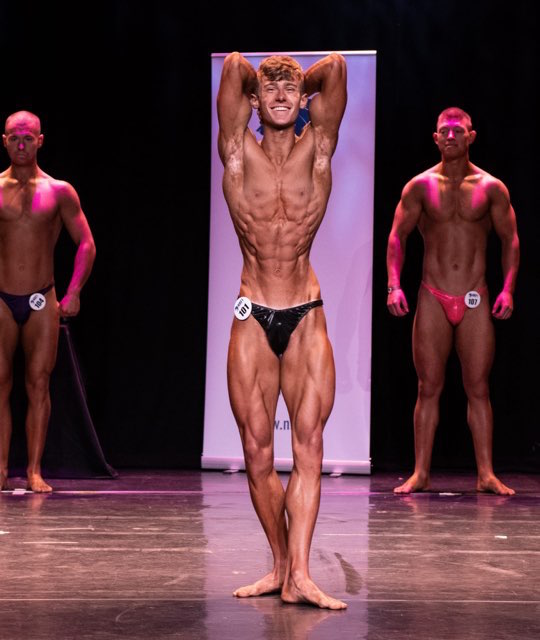 Tommy strikes a pose to win the national Under 19 title.

Tommy is thankful to his ‘posing’ mentor Shane Cullen from Monasterevin in Co Kildare who helped him choreograph his routine for the national finals.

Despite the fake tan and the completely body transformation, Tommy said that his classmates and those at St Eunans have been nothing but supportive.

“People have been very kind and really encouraging and nothing but supportive. A lot of my schoolfriends have been asking me lots of questions about bodybuilding which is nice.

“I’m just delighted to be able to answer them and let them know about it. It’s such a great sport and I would be delighted to help anybody to get into it.

“The bodybuilding community is a small one but people in it are very close and so many people have been so good to me,” added Tommy.

Nailing a college place down is next on the agenda for Tommy who still hasn’t decided exactly on what course or career to choose.
In the meantime he’s happy to continue juggling exercise and study with the unwavering support of his family.

Afterall, how many families would agree to yoga classes at Letterkenny’s Hot Fox Studios to show their support and help Tommy with his competition preparation.

He agrees that they literally bent over backwards for him.

“I wouldn’t have won the title without the support of my family. They sacrificed so much for me and I’m so thankful to them,” he admits.