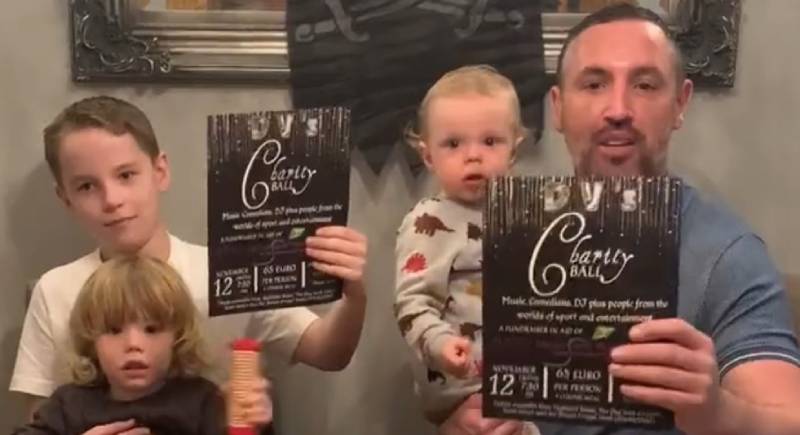 The charity ball being organised by former Donegal footballer, Brendan Devenney, in Letterkenny has been sold out.

DV’s Charity Ball, which takes place in the Mount Errigal Hotel on Friday, November 12th, will be attended by at least 400 guests following confirmation that all 40 tables have been sold.

“With just over a week to go, it’s great to have all the tables sold,” commented Brendan who presents the weekly podcast, The DL Debate, on Highland Radio.

“If people are still interested in purchasing a ticket and coming along, Terry at the Mount Errigal said he would accommodate a few extra seats on the night. The people of the north west and local businesses have been really supportive and I’m extremely grateful for that,” he added.

The three charities that will benefit from the fundraiser are Plan International Ireland, Cancer Care West, and Focus Ireland.

“On the night we will be sponsoring 21 children through Plan Ireland. Cancer Care West and Focus Ireland are doing superb work and these two charities will also benefit with donations through the GoFundMe page – DV’s charity Ball – and by those attending on the night,” he added.

“Bumble Bee Honey are the band for the night. They’re coming up from Roscommon and they’re a brilliant band. We have Donegal Peerson of the Year, Noel Cunningham, Danny O’Carroll aka Buster from Mrs Browne’s Boys coming along, while comedian, Aidan Tierney is making the trip. We’ll have some of the Donegal All-Ireland winning teams from 1992 and 2012 while Greg Hughes from Highland Radio will also be among our guests,” he said.

“We’ll have a number of big screens on the night and Bradas O’Donnell from Bradas Media will be there to help with that. Others who will be assisting on the night will include Highland Radio’s Oisín Kelly, Paddy McGil from Ocean FM along with my sister, Maria. Anyone still looking to come along on the night cane message me through Facebook or Twitter. Anyone who’d like to make a donation to the fundraising drive can do so through out GoFundMe page.”

To make a donation to the GoFundMe page, follow the link below:
https://gofund.me/3d85def4