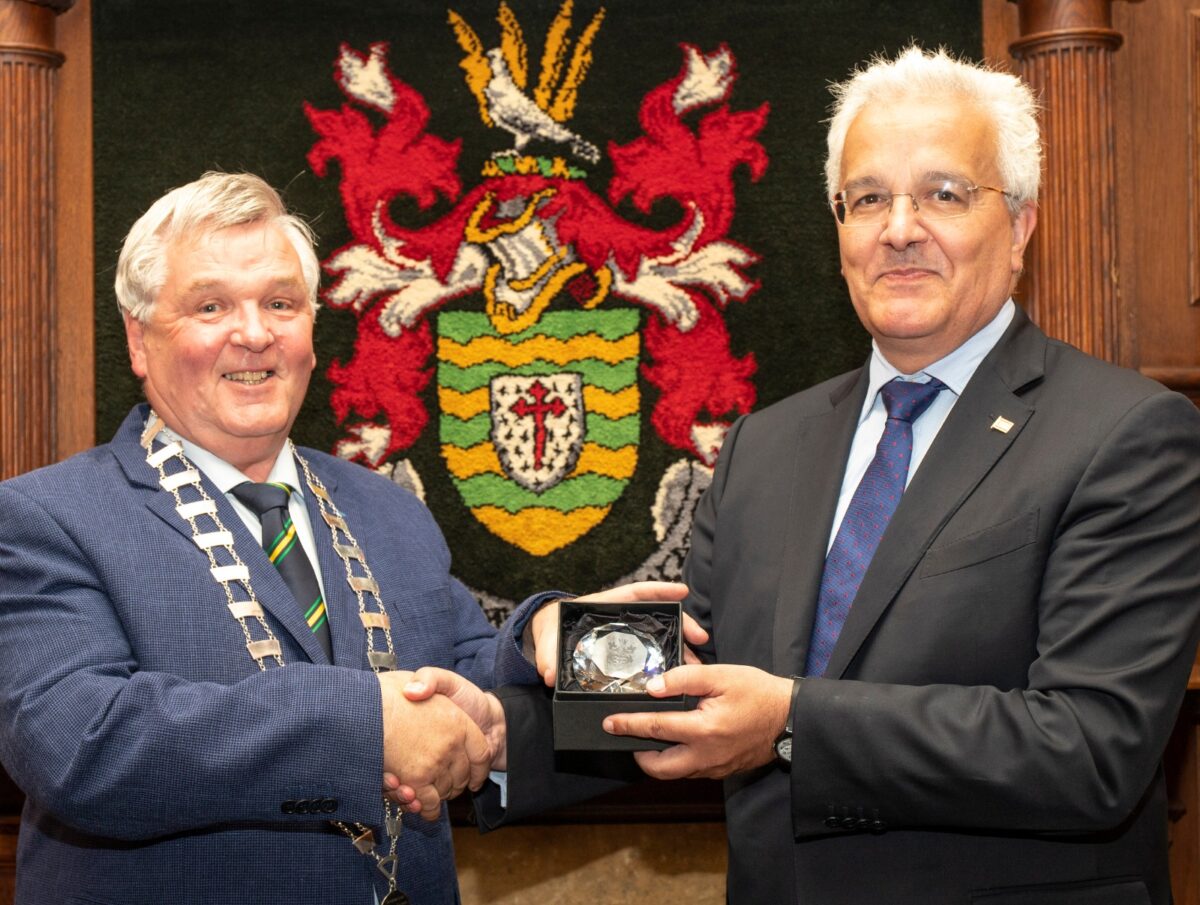 The Spanish Ambassador to Ireland took a great interest in the Red Hugh Ó Donnell legacy during a visit to Donegal on Monday.

Cathaoirleach of Lifford – Stranorlar Municipal District, Cllr Gerry Crawford, and His Excellency Mr Ildefonso Castro, Ambassador of the Kingdom of Spain, met with staff at the Donegal County House in Lifford on ‘Europe Day’.

The Ambassador met with Cllr Crawford to discuss the MD’s proposal to twin the Municipal Districts of Lifford-Stranorlar and Valladolid in Spain. The proposed “twinning” is a project of the Red Hugh Ó Donnell Lifford Committee to mark the birthplace and resting place of Ó Donnell.

Ó Donnell was born at Mongavlin Castle in St Johnston and is thought to be buried in the Chapel of Wonders, Valladolid, which was at one-time the capital of Spain.

Commenting on the visit, Cllr Crawford said “It was wonderful to meet Ambassador Castro while on his visit to Donegal on Monday and I thank him for taking the time to visit our County House in Lifford. The Ambassador was clearly very interested in the history of Red Hugh and his connections in the Lifford-Stranorlar MD and the Valladolid MD. The twinning project is exciting and we hope to move it along now. It is a project spearheaded by the Committee and adopted by the Lifford-Stranorlar MD elected representatives.”

Minister McConalogue commented “The Ambassador kindly visited Donegal this week to mark Europe Day. During our conversations, it was clear that the Ambassador has a deep interest in Irish-Spanish relations and an interest in the Ó Donnell legacy and his connections with Spain. It was fitting to mark the life of Ó’Donnell on Europe Day given the travels of Ó’Donnell in European countries and his final resting place in Spain. I thank him for taking the time to visit Donegal and to visit our County House in Lifford to discuss the potential twinning of the municipal districts.”