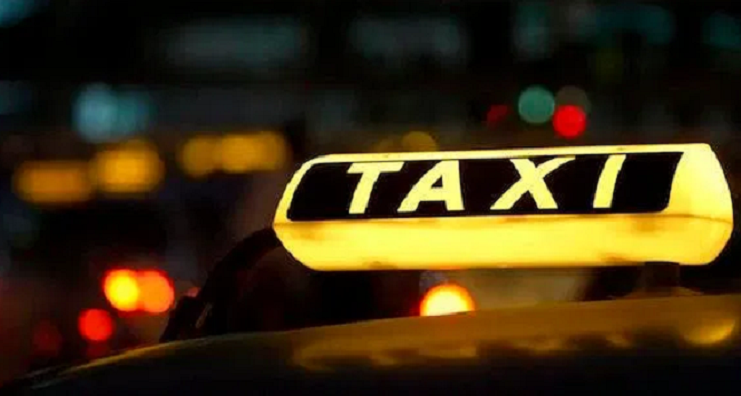 A man who hi-jacked a taxi using only his finger has been jailed for two and a half years.

Alan Luukas said he felt like he was in an episode of 1980s American police television show ‘Starsky and Hutch’ when he forced the driver to cross the border from Donegal to Derry.

Luukas, 43, appeared before Letterkenny Circuit Court where he was charged with false imprisonment and making threats to kill during the terrifying incident.

Luukas jumped into the back of the taxi in Moville after another man had flagged it down.

Once inside the taxi, Luukas shouted “I have a gun. Take me to Derry or you’ll get a bullet. I’ll blow the head off you if you don’t do as a I say.”

The passenger had earlier noticed hanging around the streets of the coastal town but couldn’t stop him jumping in the taxi.

Luukas terrified both the driver Mr Thomas Lake and also his passenger Danny Murphy as they traveled the 18 miles across the border to Derry.

Along the way he kept telling the driver and his passenger “You’re going to get a bullet in the head. Keep your hands up and no funny business.”

He added that his daughter had been killed and since that he had no respect for life.

He warned the two men “I’ve murdered before and I’ll murder again. It’ll not cost me a second.”

Taxi-driver Mr Lake said he met a Garda patrol car at Muff and considered flashing his lights at him but didn’t.

When they got to Derry, Luukas told them to empty their pockets and that he wanted their money but they told him they had none.

He then told the driver to take them to Foyle Park which was where his mother lived.

Just before he got out of the taxi he told them “If I see any sign of any Gardai or police you are dead. If anyone comes looking for me I’ll send boys after you.’

The witnesses then said it looked like he was putting something down his trousers and Danny Murphy said to the taximan “Drive, drive, drive.”

They added that although they didn’t actually see a gun they were in fear all the time.

The victims got home and decided to sleep on the incident but reported it to Gardai the following day, March 5th, 2015, for fear Luukas would strike again.

For six years there was no sign of Luukas despite attempts by Gardai to contact him across the border in Derry.

Then on July 2nd of last year, he was arrested following a public order incident, again in Moville.

A Garda at the scene remembered Luukas, who has a distinctive scar above his eye, and linked him with the previous crime.

While waiting for the Garda van he threatened Gardai “I’ll have you murdered and your family murdered. I’ll have you shot by the IRA on the street. I’ll sort you out for that, you’ll be shot, I’ll get you in the long grass.”

When questioned about the hijacking of the taxi Luukas initially denied it was him saying a lot of people in Moville just didn’t like people from Derry.

However, when he heard the facts and what the victims had gone through he made full admissions.

He compared it to an episode of Starsky and Hutch, said he didn’t have a firearm and just wanted to get to his mother’s house.

Saying he was concerned about the men he asked “Did they get home okay. I was a good actor back in the day. But that with drink and you have no feelings. Yes, it was wrong beyond belief.

“It sounds like it began as a mad idea coming from a bar drunk and looking for a taxi. A crazy idea that got out of control.

“Im disgusted and devastated. I have to stay strong. This was a mad idea. It was like Starsky and Hutch, when you’re in a car and you get carried away and one thing leads to another.”

Mr Luukas told his barrister Fiona Crawford that he would like to meet his victims and tell them how sorry he was.

Ms Crawford said her client suffered from mental health issues and has no connections whatever with any paramilitary organisation and had never actually seen a real gun in his life.

“As he said himself it was gaga, madcap and bizarre and he would like to apologise from the bottom of his heart for the kidnapping,” she added.

The court was told Luukas has 32 previous convictions in Northern Ireland for a range of incidents including arson, burglary, assaulting police and drink-driving.

Barrister Ms Crawford had asked for the case to be adjourned to get a full psychiatric report for her client.

Ms Crawford said a psychiatric report had been carried out on her client by Dr Benjamin O’Keeffe of the Central Mental Hospital.

Passing sentence Judge Aylmer said the hijacking of the taxi was “a most serious offence” saying it was a terrifying experience of the two men involved.

He said that before mitigation all charges apart from the threats to Garda Ward which merited a two year sentence merited a sentence of five years each.

In mitigation he said he appreciated Dr O’Keefe’s view that Luukas did not appreciate the seriousness of the matter and its effect on his victims.

He said he accepted Luukas is bipolar and suffers from psychiatric symptoms.

However, he added that his main problem was that he chooses not to comply with taking his medication and decides to binge drink instead saying “That’s when he becomes a real problem for the criminal justice system.”

On mitigation Judge Aylmer reduced each sentence to one of two and a half years and backdated the sentence to when Luukas went into custody last July.

Man who hi-jacked taxi with his finger jailed for two and a half years was last modified: May 20th, 2022 by Staff Writer
Facebook0Tweet0LinkedIn0Print0