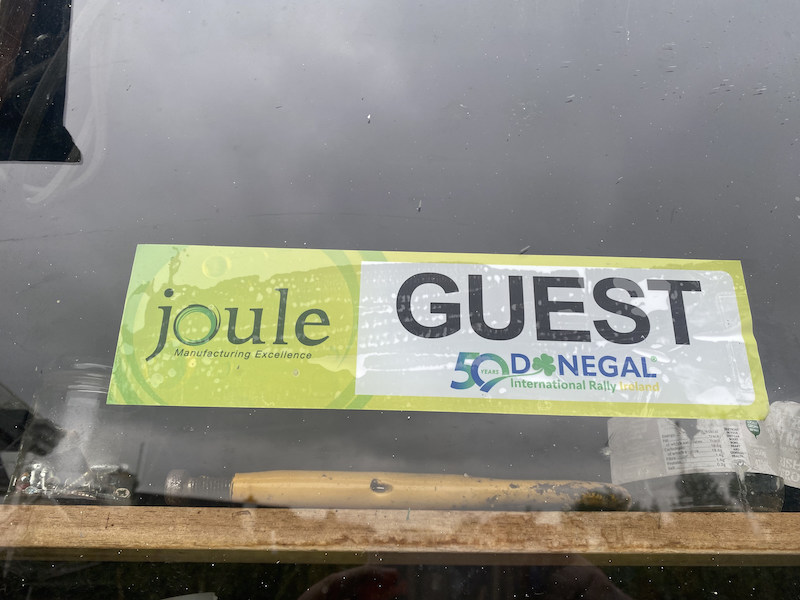 The rally sticker is now up on the garage window. It will fade as time goes by but it will remind us of one of the great Donegal International Rallies.

That’s what you do with your door number sticker from 1 to 151 – all wee stories of a year in time of the Donegal.

Ours was a ‘guest sticker’ kindly given by us by the motor club and worked perfectly to welcome my brother home from America for the rally. Here is our story.

Jimmy did the same thing that everyone else does at the finish ramp in the Mount Errigal Hotel. He waited in the crowd to see his grandson max home to the finishing ramp – in 53rd place overall.

As the Fiesta made its way up onto the ramp outside the front door of the Mount Errigal Hotel two former British Rally Champions, Max’s father Alaister and grandfather Jimmy joined in for the photo along with Co-driver Mac Kierans. Alistair would have been 10 years old when Jimmy McRae pulled his silver DTV Chevette on to the ramp at the old Ballyraine Hotel in 1980. I often wonder if Alistair and his late brother Colin would be in the crowd all those years ago to welcome his father home. This year the rallying grandfather was out doing gravel notes on the stages in Donegal for his Australian grandson Max. 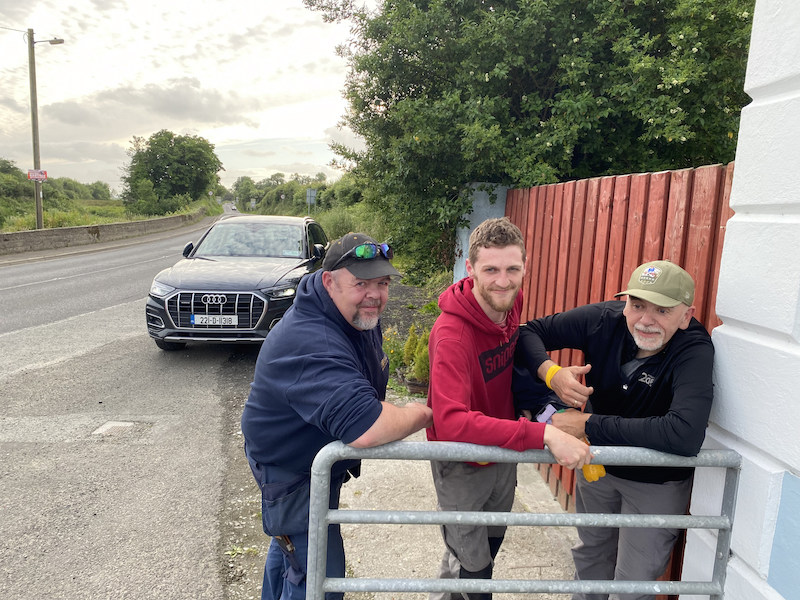 We burnt out the element of the kettle over the weekend sitting in the kitchen yapping and drinking cups of tea. And if you were to ask what we were talking about we couldn’t tell you.
Most Sundays we do the same thing with one difference – there’s 3,000 miles and 5 hours between us, my brother in his home in Boston and me in Glencar. It’s been three years since the last Donegal rally, that’s when Neil, my brother, was home.

I’m not a big fan of FaceTime or the likes so we sat chatting on the old phone on Sunday evenings describing everything to each other and weathered the storm that the Covid pandemic is.
On Sunday evening two generations of our family stood up in the pavilion of the Mount Errigal Hotel. Leaned out over the banister and watched many examples of the famous McRae family make it home. 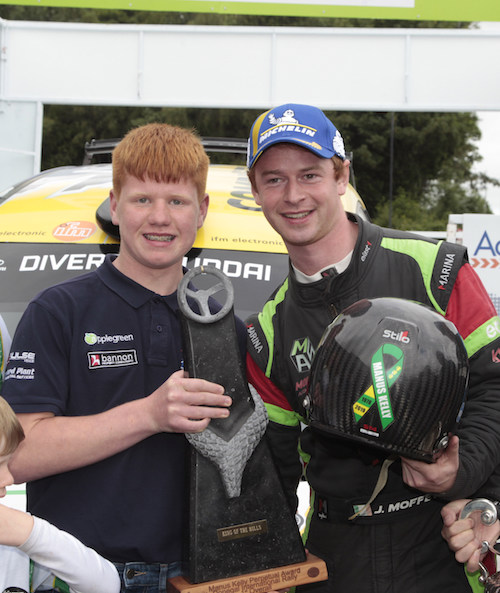 The Kelly, Mc Bride and Lynch family gathered at the side stage to hand over a new very special award in memory of the late Manus Kelly, young Charlie made the presentation to overall winner Josh Moffett who just before the presentation was made Josh rush back to his car to take out his racing helmet which proudly displayed the memory ribbon of Manus Kelly. 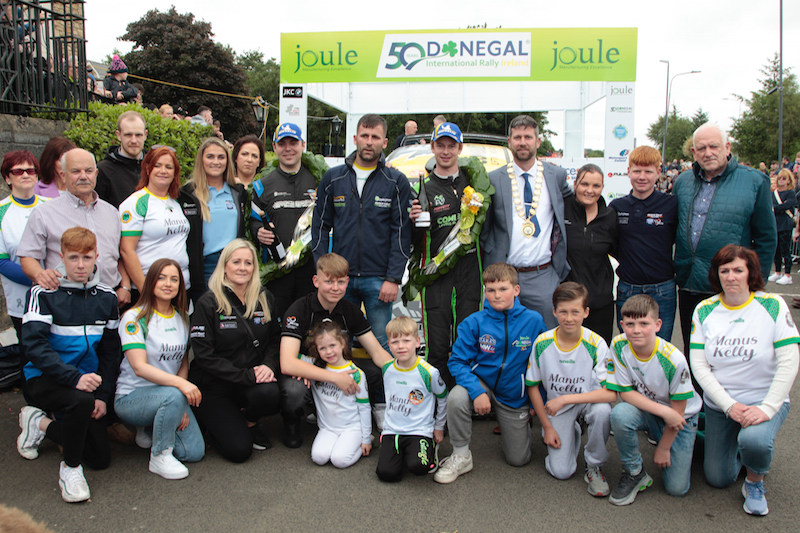 Josh Moffett’s father Robert was the one we waited to see in the Donegals in the 80’s in his alway sideways red RS1800 (PBI) registered Ford Escort with Letterkenny’s Cathal McGettigan calling the notes for the Monaghan man back then. Josh’s brother Sam won the Donegal twice in 2013 and 2019, now the brothers were first and second on the finish ramp in ‘22.

Over the weekend we packed up a car and five of us headed to the rally. It didn’t all go well on Friday. Our flask wasn’t keeping the water hot then on Saturday in Fanad we landed with piping hot water and no tea bags! Other than that as spectators we think Donegal was up with the best of them. 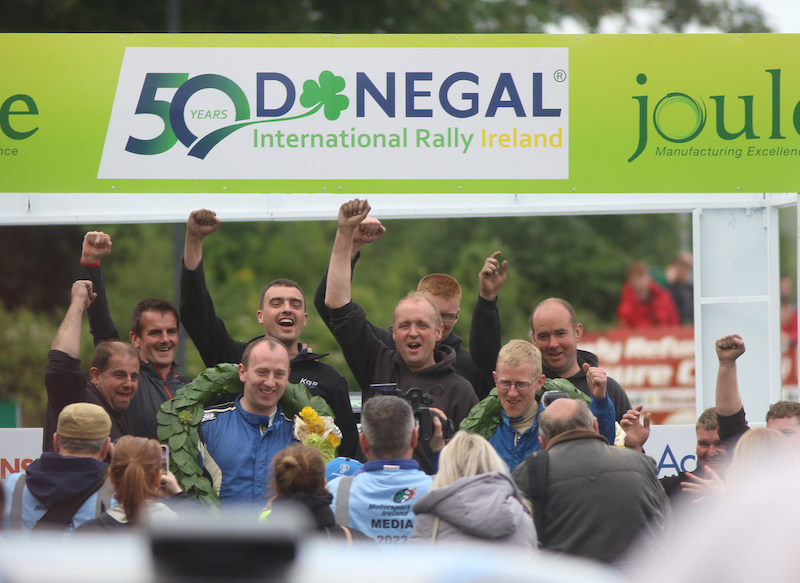 Engine builder Kevin Gallagher (KGP) winner of the National section of the Donegal in his Darrien celebrate with Paul Reid from Reid Motorsport and the service crew at the end of the rally.Photo David McDaid. 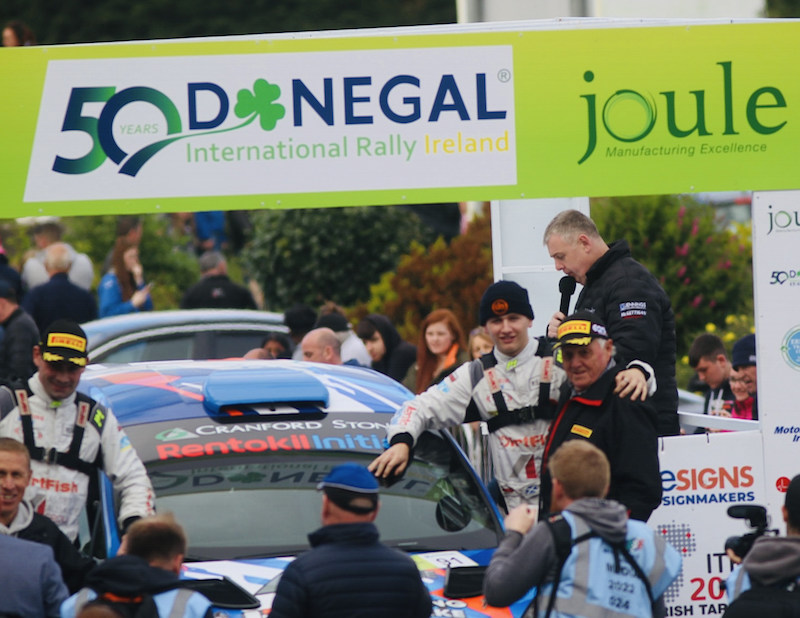 Max McRae with his grandfather Jimmy and father Alistair at the finishing Ramp. Photo Brian McDaid.

On Sunday evening we stayed on for a while just like old times at the Mount Errigal Hotel and soaked up the atmosphere . Alistair McRae was standing a few feet away from us in the bar but we couldn’t see Jimmy and we didn’t really know what young Max looked like, the young Australian turning 18 on Friday last it was his first tarmac rally and first ever European event and he came up to Donegal to launch himself onto the world stage. It was a big event for Max just as it was for someone like young Adrian Wasson a son of the late Davy Wasson one of the events organisers over the years always wanting to do the Donegal and finally getting to the starting line this year in his Peugeot.

They were many drivers that impressed this year in a battle for the he lead over the three days and then there was them wee nuggets of talent from drivers in their home stages I was on Gartan first time through when local hero Mark Alcorn powered through to produce the fastest time in the nationals and third overall in the rally in his beautiful Mk 2 Escort – an achievement he was to dedicate to his late mother. 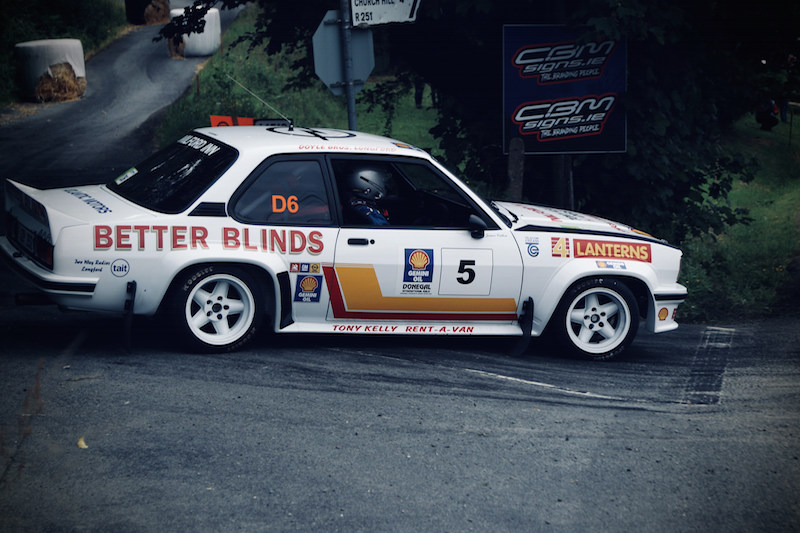 James Cullen in his Ascona on the opening stage in Gartan on Sunday Morning. Photo David McDaid. 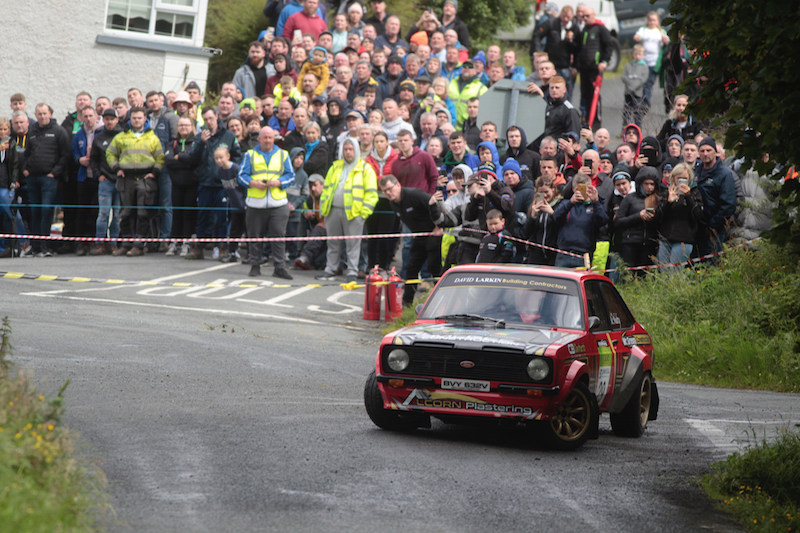 Mark Alcorn on his way to a great time on Gartan on Sunday morning. Photo Brian McDaid

And later that day Eamon McGee produced the fastest time in the nationals in his Escort in his native Downings in the Atlantic drive but for me it was the team effort from Kevin Gallagher (KGP) and Ryan Moore in the Darrien and Paul Reid’s team Reid Motorsport to take home the overall team national title. That was the moment for me with them all punching the air with oil covered fists on the finish ramp and one which summed up Donegal and the effort that goes on behind the scene by rally crews and event organisers to produce another successful rally.

As I stood at Mount Errigal watching the last few competitors make it over the ramp and then hear wee cheers from families that waited patiently for them to arrive, you could hear the rattle of metal clanging as the safety barrier crew had already started to dismantle the finishers enclosure.

We sat in for a few drinks in this famous rally hotel once called the Ballyraine as the bar emptied out as staff ushered competitors into the function room for the prize giving . We head for home and already the finishing ramp is away and packed up for another year. All that remains is one of the big folding tables from the hotel sitting in what has now returned back into a car park. 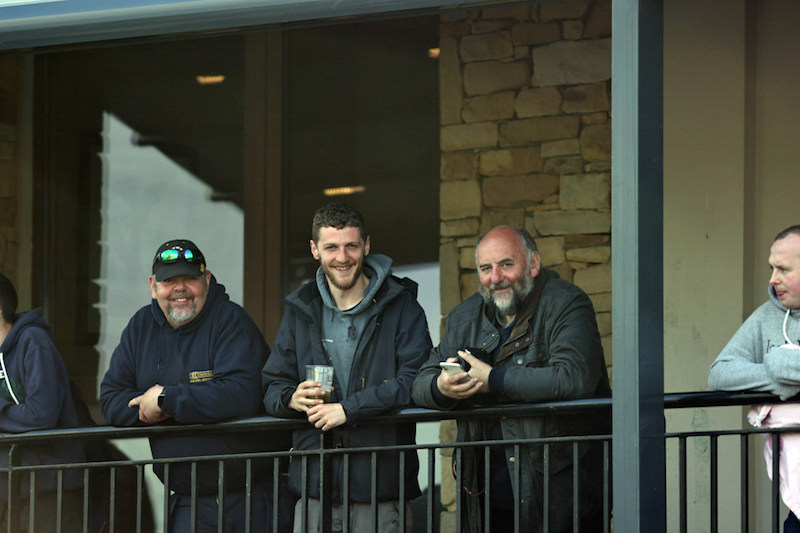 Cathal David and me standing watching the cars go by at the Mt Errigal Hotel. Photo By Neil McDaid. 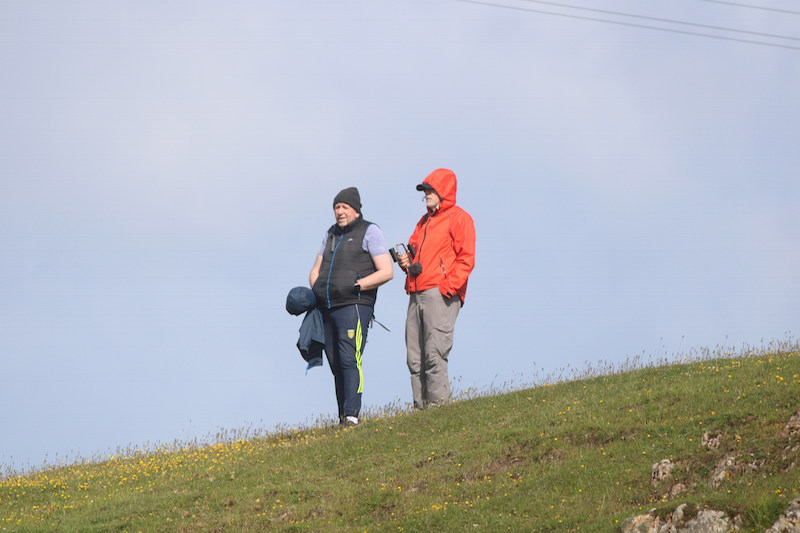 Peadar and his brother Neil Mc Daid back for America for the Donegal Rally pictured high on the hills in Fanad watching that rally. Photo Brian McDaid.

This Wednesday morning my brother Neil is on the road back to what has become his home for the last 37 years as he flies across the Atlantic to land in Logan Airport in Boston.

The batteries that keep us going in life have been tested over these last few years. The Donegal back on the calendar this year has recharged us, the sunburn reminds us of just how good it was over the last weekend, meeting up with your family and friends and that special time when we remember them that are no longer with us.

The craic was mighty and no better summed up by an in- car clip of Seamus Callaghan and Amy Burke’s scenic route around Atlantic drive (link below).

I’ll leave that last word with all the past winners that returned for the 50th event and did a few stages on Sunday morning greatly supported by local businessman Donagh Kelly famous names like Ari, Curley Coleman , Lyons , Bonnar ‘ Cullen McHale , Nesbit all were here this weekend it doesn’t get much better than that.