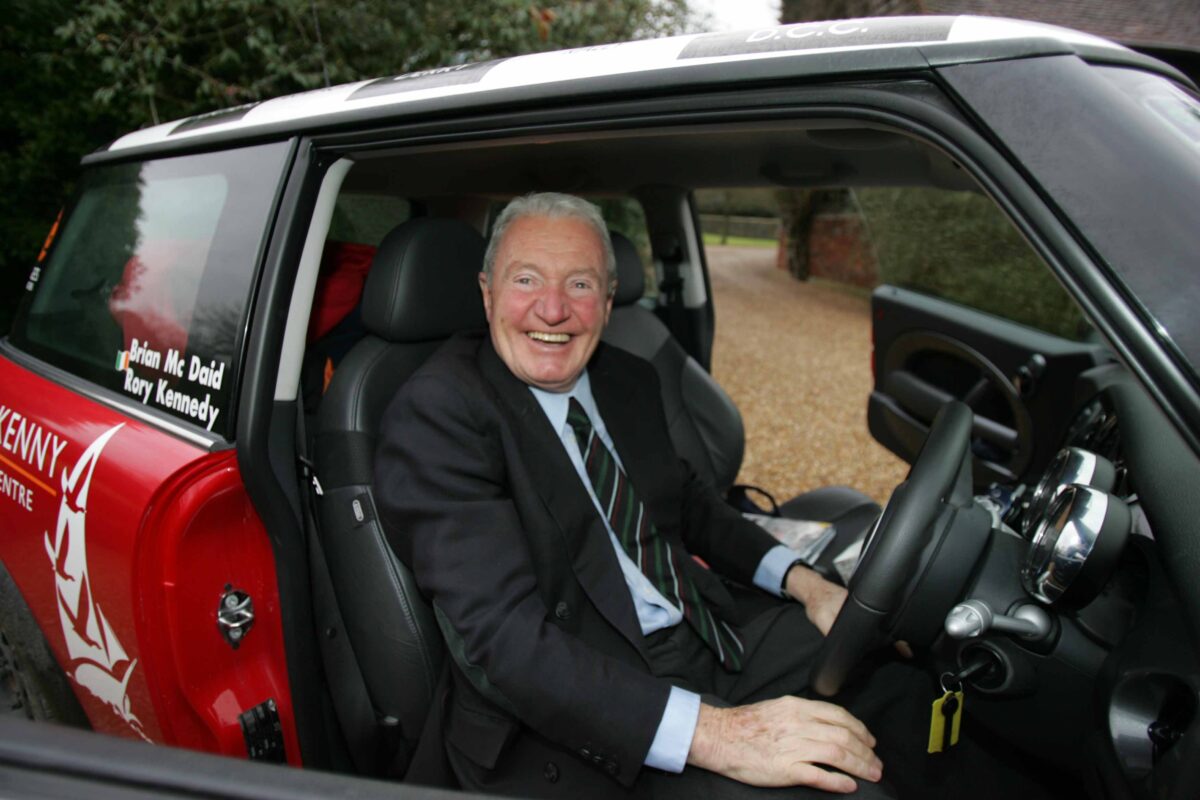 The electric gate opened before us and we were driving up a pebble driveway, the stones crunched under our winter tyres. The red brick house and old barns looked more like a picture from the top of an old chocolate box.

The highlight of this journey was supposed to be a thousand miles further down the road but this might be a hard act to follow. It wasn’t on the original plan until an email was replied to over the Christmas holidays. I think it might have been William from my memory who replied to my email which was forwarded to him from a company I sent the request to. William son of the great Paddy Hopkirk asked me for a few more details on what I was planning to do and then replied confirming that his father would meet us on our road trip from Letterkenny to Monte Carlo charity run in aid of the Donegal Hospice. 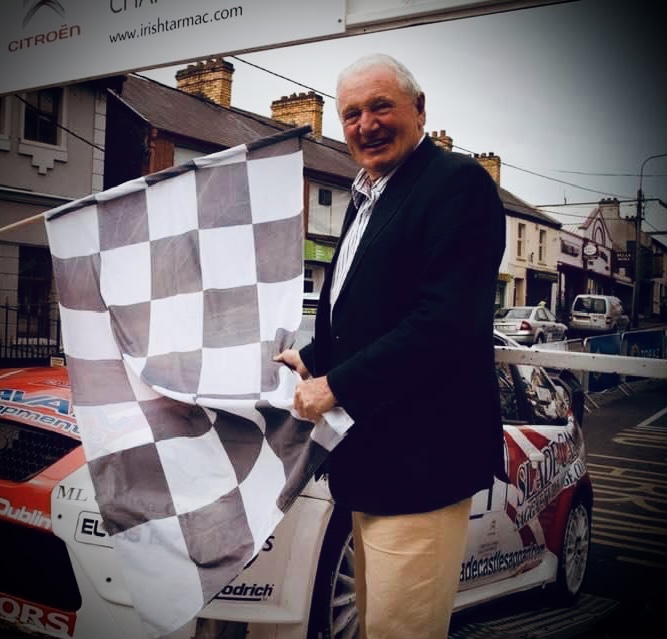 Tottenham Hotspur and the late Paddy Hopkirk have a very unique place in my life. I have been a fan of both all of my life and yet I have never seen either compete live in their sport of choice. That’s what you did growing up in my era watching Spurs on the telly week in and week out, but it was the passing of Paddy Hopkirk at the weekend that got me thinking about these unique similarities.

I didn’t really know Paddy Hopkirk at all, It was more the brand that I knew about with Paddy Hopkirk which he gave his name to as a car accessory and competition equipment and devices brand name. His rally days were well past when I became interested in rallying. It was on my 40th birthday on a special holiday to the Monte Carlo Rally, that and the mixed emotions of word of a death at home rally driver and friend Eamon Harvey that focused me on Paddy Hopkirk, Back in 2004

That was the year that Monte Carlo was celebrating the 40th anniversary of the Ulsterman Paddy Hopkirk’s win on the rally in his humble wee Mini Cooper S in January 1964, the same month and year that I was born. 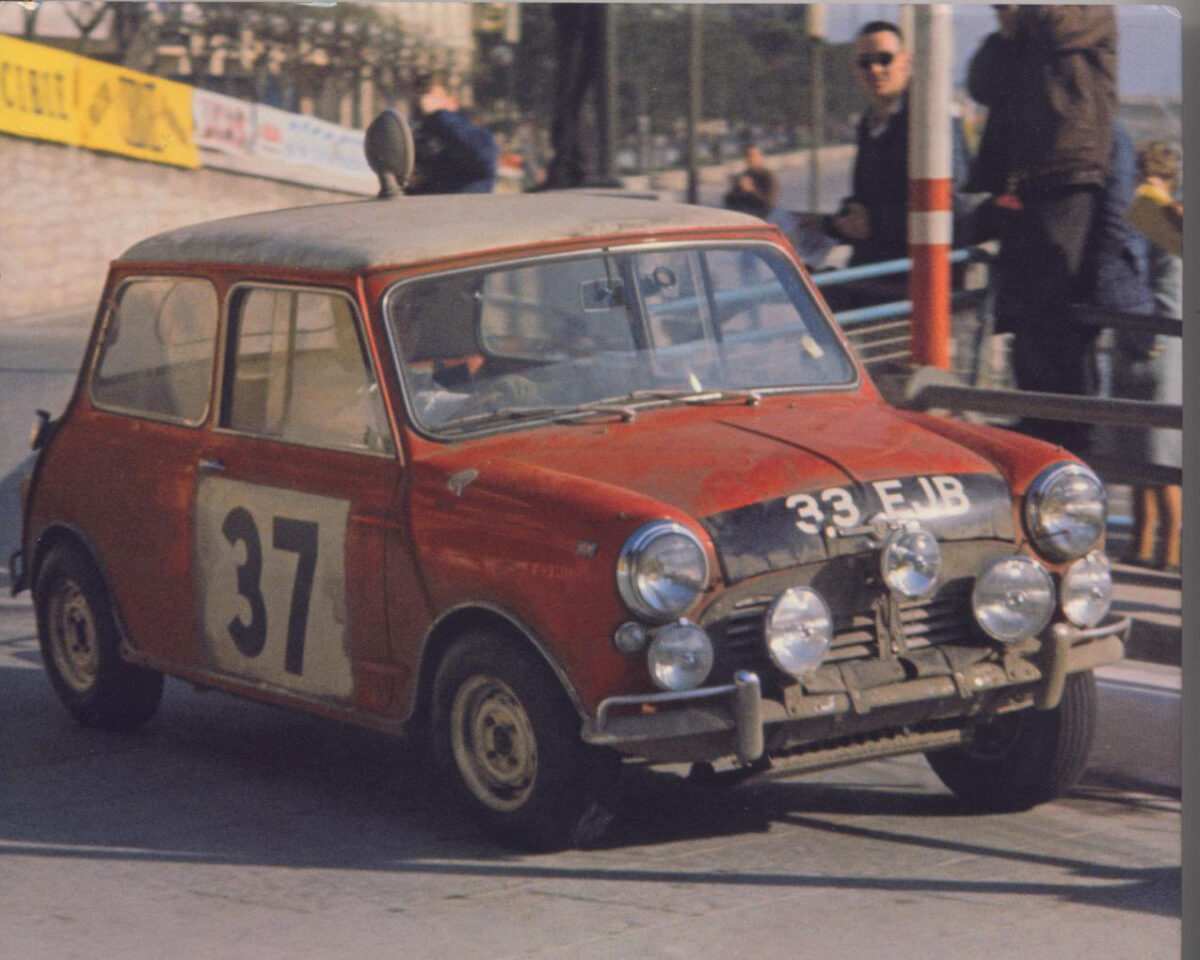 Paddy Hopkirk heading across the shore front in January 1964 in his mini on his way to a historic win in Monte Carlo. the journey we followed for the Donegal Hospice Mini in January 2006.

It’s now 2006 and we have located the home of Paddy Hopkirk and as we pulled in our red and white Donegal registered Mini Cooper alongside Paddy’s Cooper S is sitting at the front door with a number plate not unlike ‘33 EJB’ the number of his famous mini seeded at number 37 the year he won. This is the BMW version of the Mini, like or own but this was the top of the range.

‘Well Boys, how was the journey down?’ Paddy greets us in his strong Northern Irish accent, we’re invited in and introduced to his wife Jenny and sit around an old table for a cup of tea. It was around ten o’clock in the morning.

We had left Letterkenny the night before and crossed over to Scotland and had made our way down through England to call at Paddy’s home near Oxford. (Scotland would have been one of the starting points for the Monte Carlo Rally the year Paddy won the event) Paddy told us of the journey down that year and he decided to depart from a place called Minch which was then part of Russia. 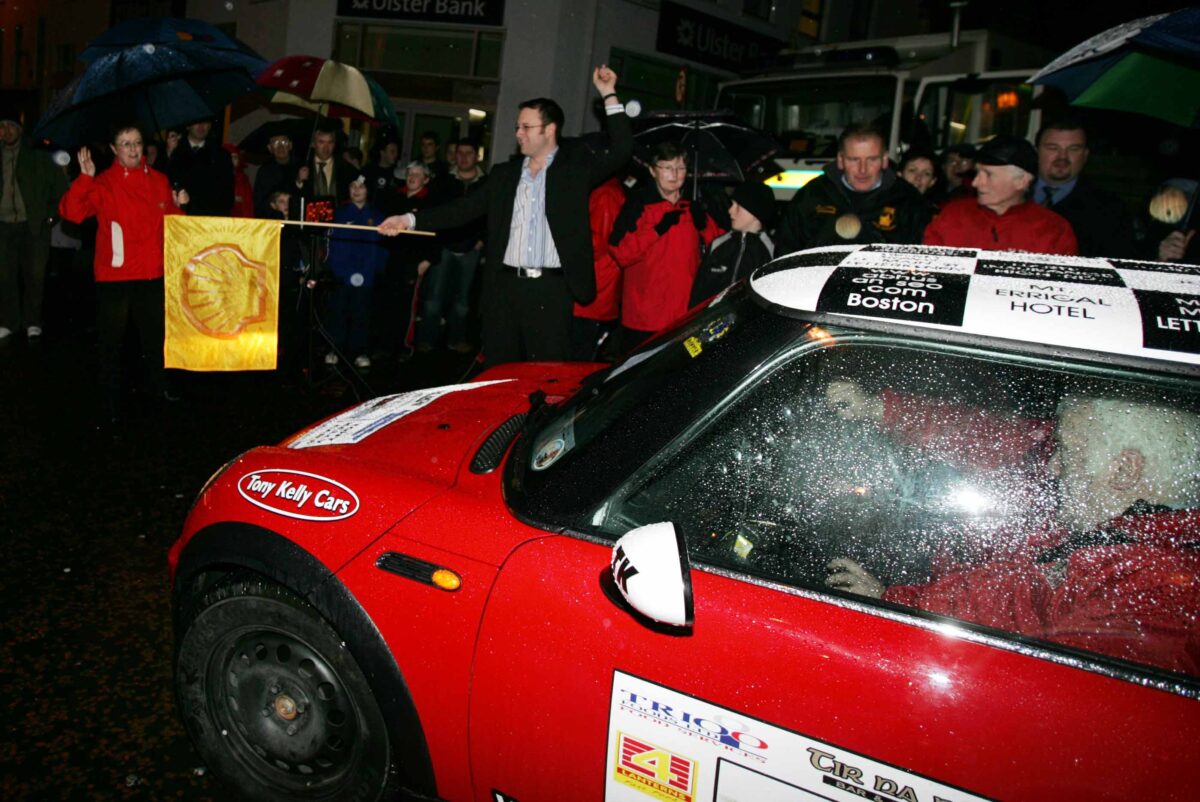 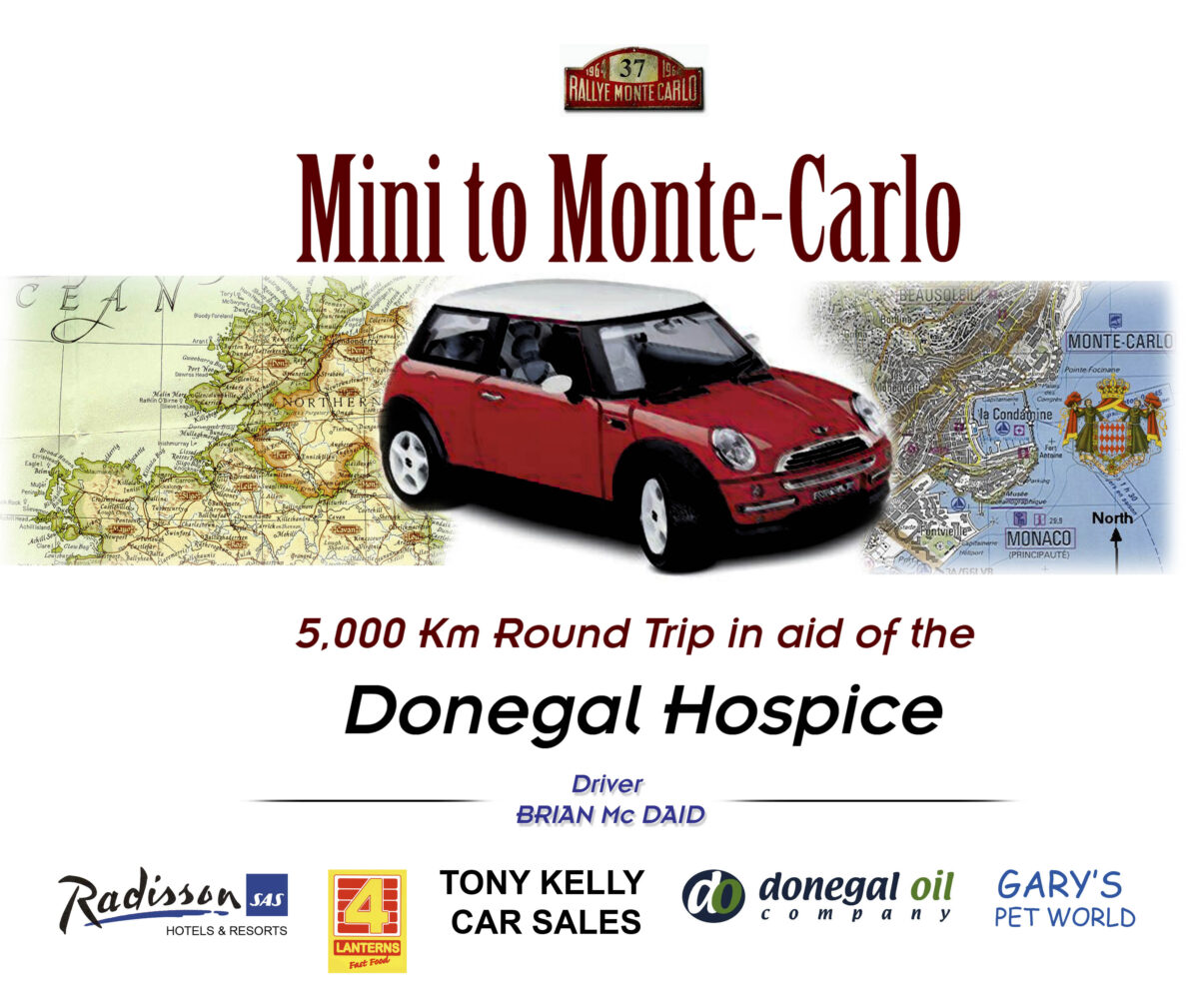 We had a wee present for Paddy from Ireland wrapped up in a very fancy wine box. Paddy unwrapped the paper and was a bit surprised when he pulled out a bottle of Cork Dry Gin, ‘Ah Gin’ Paddy said as he took a look at us ‘Not Gin’ we replied in a whisper! ‘NOT Gin’ he whispered back with a devilish smile on his face.

‘What did you get there?’ Paddy asked his wife as she looked at the bottle of Gin.

‘Aye Jenny’ Paddy replied. ‘But it’s more like a wee tonic,’ he explained as he placed it carefully at the back of his drinks cabinet.

We talked a bit about Donegal but Paddy didn’t know that many from there, he knew Dr. Mc Mahon who lived near Illistrin outside Letterkenny. Paddy talked about how both Dr Mc Mahon And his wife competed in rallying events years before with him. We could have stayed listening to Paddy chatting all day but had to head to catch the euro tunnel train and we’re hoping to get as far as Paris that evening in our Mini.

Before we departed Paddy took us to one of the old shed near the house and inside Paddy had one of the original mini sitting in a massive balloon. The balloon had a small motor which took all the moisture out of the air which provided a perfect environment to preserve this old rallying Mini Cooper S of the sixties. Paddy presented us with one of his books and signed it to mark or visit on our way to Monte Carlo, or ‘Monte’ as Paddy called it.

Me and my brother Nelius were as proud when Paddy jumped into our Wee mini for us to get a few photos of this famous rally driver behind the wheel. He took a look around our Mini looking at all the people that kindly sponsored us on the fundraiser run.

Of all the photos that we took at Paddy’s home that day was one that Nelius took of me and Paddy looking at the local mini drivers club in Donegal and me telling Paddy about our special mini man in Donegal the late Sammy Fisher and his yellow Mini which was part of the club’s Logo that we had on the back window. 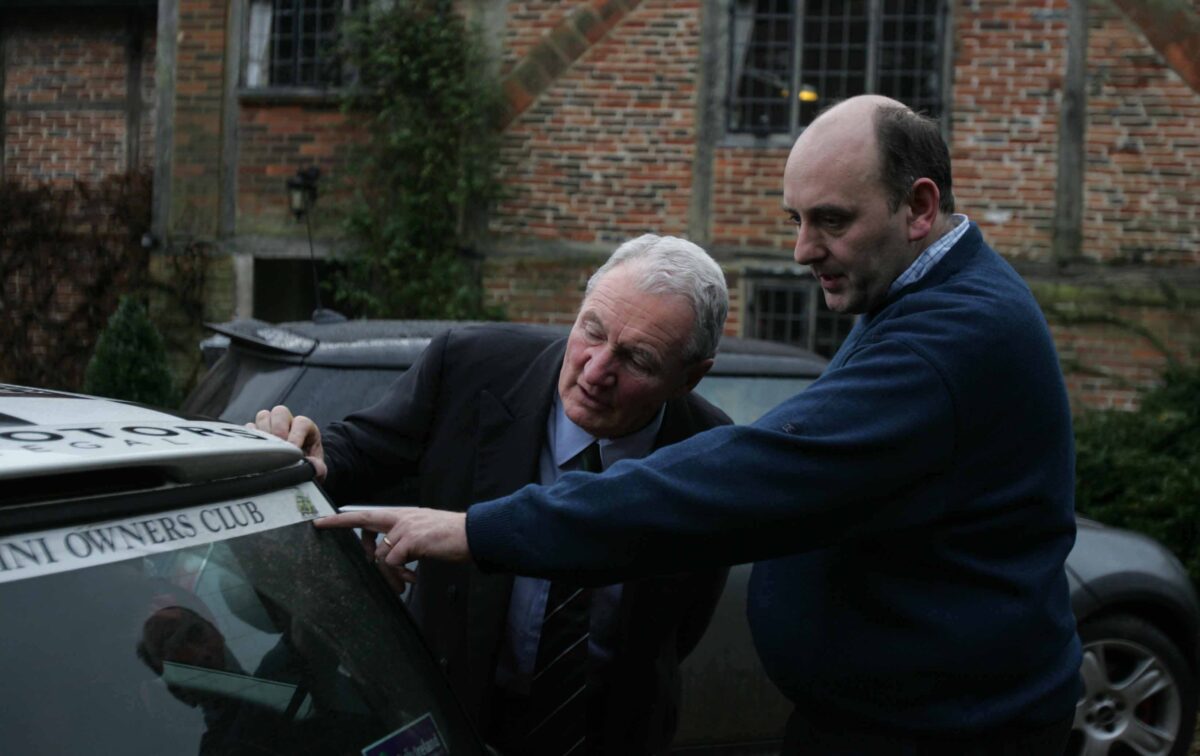 Paddy Hopkirk pictured with Brian Mc Daid as they look at at the Donegal Mini Owner Club logos on the Mini To Monte Carlo and Paddy home in England. Photo By Nelius McDaid.

The Donegal Mini Owners Club pictured on Knockalla on Sunday as they take their drive around Donegal pictured with the Mini To Monte Carlo. Photo Brian Mc Daid

As we left paddy’s home and headed for or crossing our batteries were fully charged meeting the likes of Paddy on a journey in which we were tracing this great man’s journey to Monte un a mini.

Over the weekend I looked through a lot of old photos, videos and radio recordings from that brilliant trip back in 2006, and friends that supported the run, some that have since passed from this earth. I thought about Paddy a lot even though I had only met him three times, that day at his home, once when himself and Phill Coulter waved the cars off at the start of the Donegal Rally at the starting ramp at the foot of the Port Road. And the last time that I met Paddy was when he led the cars away from the pier in Donegal Town for the start of Donagh’s Deja Vu run last year. That day while I was taking photos his Co Driver Rory Kennedy reminded him that it was me that called to his house on our trip down to Monte Carlo, and quick as a flash Paddy replied that all that was left in that Gin bottle I gave him was a few pieces of spud and I could be doing with a refill! He joked.

I have included a wee recording of the late Frank Grimes voice who was just one of the great supporters of the Mini Run we did, it’s hard to believe that it’s ten years since he passed away just one of many that are no longer with us.