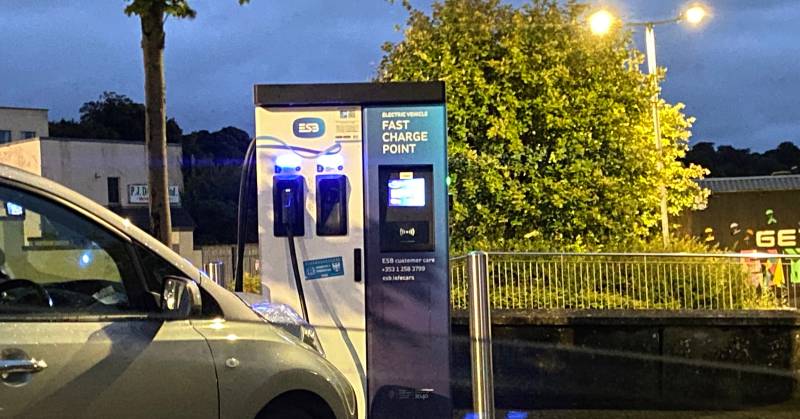 Three years on I imagined it would be a bit different.

Back on St Patrick’s Weekend in 2019, I drove an electric car from Malin Head in Donegal to Mizen head at the bottom of Ireland in Cork.

I know I wanted it to work, because back then I believed it was the way forward. And it did go forward as the increase in electric car drivers made the change over from diesel mostly to all electric cars.

What I find 3 years on is that the planned roll out of public electric car chargers hasn’t matched the demand. A quick look around my hometown, Letterkenny, I find that there is actually one less public charger in the Letterkenny area now than there was 3 years ago.

To compound this, only 2 of the electric car chargers in Letterkenny are fast chargers. This means that the rest of the public chargers will take up to 5 hours to charge a typical family car.

I took a wee spin around these charging points in my own area and noticed how little these slow charging points are being used. Most owners of electric vehicles end up charging their cars at home overnight and if they commute to work to a place like Letterkenny there’s a good chance the limited amount of charging points will already have someone using them. 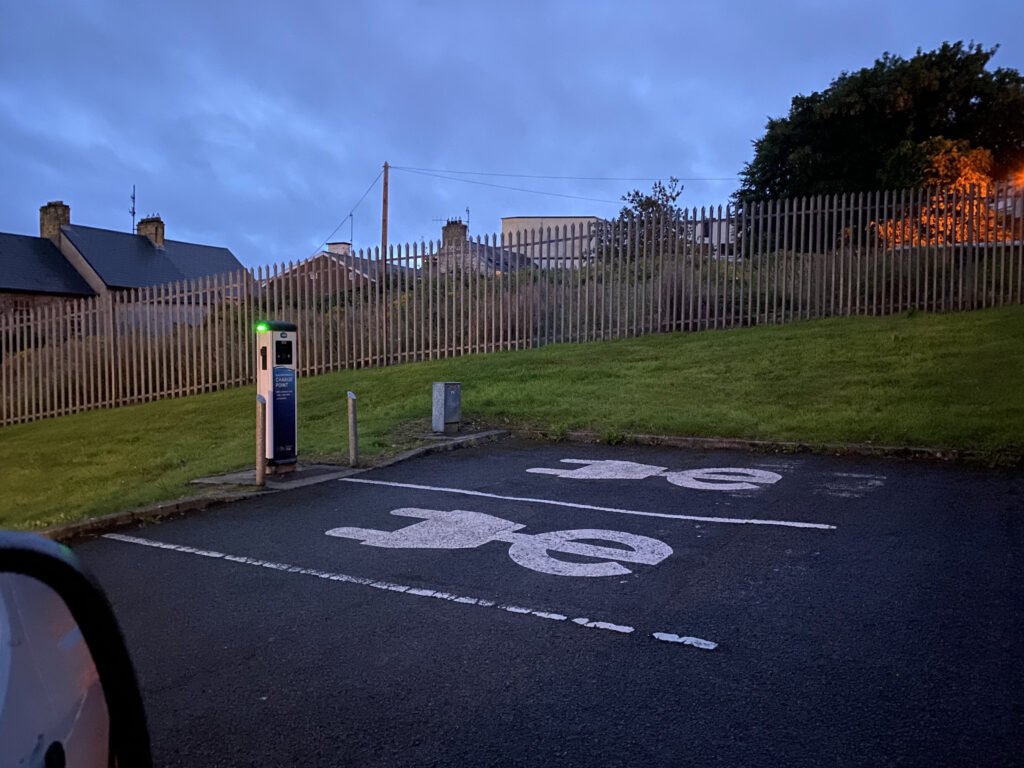 The double charging bay in Letterkenny which some feel it too far out of the way. Photo Brian McDaid.

It’s become a bit like the first towel by the pool with a public car charger. Planning your journey a few minutes earlier in the morning could secure the 5 hours you need on a regular public charger.

Equally, you could miss that space and with the shortage of chargers it’s not surprising that green drivers of these cars can see red.

The network of public charging points are too few for the amount of electric vehicles (EV) that are on the road today. Letterkenny is bad but it’s the best served in Donegal!

It’s hard to believe that there is a plan to do away with all combustion powers and replace them with electric cars over the next decade.

The roll out of charging points never happened and the incentive to encourage drivers to make the switch by offering public charging of cars for free has long gone and to frustrate things more, especially for drivers of EV’s in Donegal living along the border with Northern Ireland where charging is still free of charge. 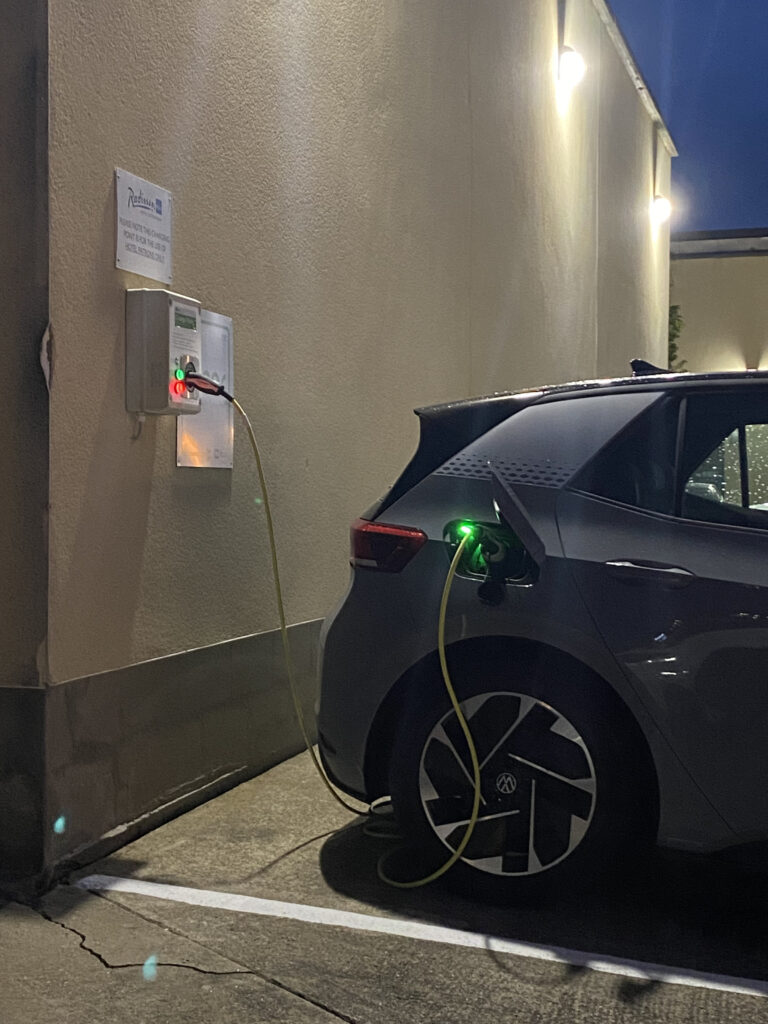 Plugged in for the evening on an overnight charging point. Photo Brian McDaid.

Chatting to a few people with electric cars from Donegal they found a cool enough response when they returned to their Donegal registered car that was on a charge bay in the North.  When someone was waiting to go on a charger, jives like ‘You southerners are always stealing our free electricity’ is a typical comment.

It wasn’t so funny for another southern registered driver  who came back to his car on a charging point to find that his battery was fully charged but one of his tyres was flat, it was only when the driver went to get the tyre repaired he found that nothing was wrong with it only that someone had let the air out of the tyre at the charging point.

I know something like this happening at a charging location is more like the exception rather than the rule. The electric car is still the best way forward and the development and availability of electric cars in all sorts and forms is here now. 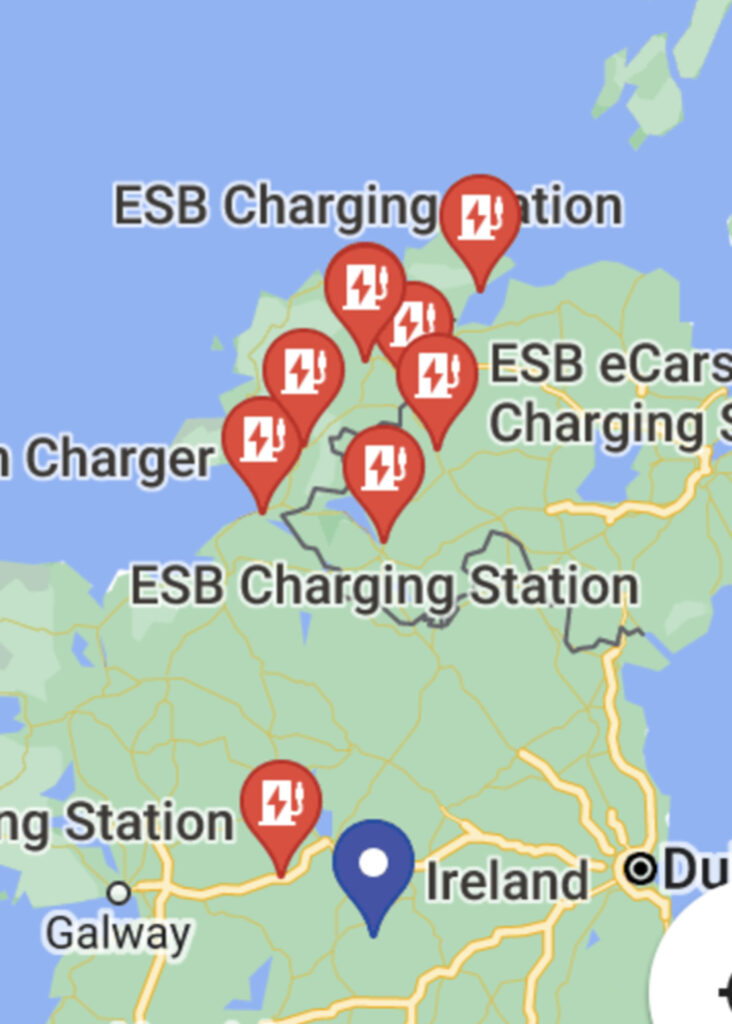 The app showing how few chargers are available in Donegal.

The only problem is the shortage of public charging points. I’m not sure is it the lack of national incentive, the cost of installation, or the small financial return that seem to be the reason more chargers are becoming available.

You would think that any place that the public would spend a few hours at, like retail parks or shopping centres, places like Glenveagh National Park, Ards Forest Park, even Ards Friary would all have fast chargers in their car parks where locals and tourists alike could go and enjoy parts of Donegal and not have to worry if they had enough juice in the batteries to get home.

Street light charging points are a great new idea in the UK at the moment offered by a company called Ubitricty.

They can fit a double charging point onto an existing street light. I think it is a great idea where it uses an already existing infrastructure which already has a power supply in it for a perfect site for charging points. These companies work with the local authority.

For those interested in the stats in electric cars, it makes interesting reading from a recent survey from which 40% of the owners of electric cars said they bought them with the environment in mind, 39% bought electric cars for a financial saving.

Three times a week is now the most popular routine for charging their cars, more than half the electric car owners in Ireland are paying less than five euros to charge their cars.

90% of electric cars owners in Ireland that took part in the survey said that they charged their cars at home.

One in every five new cars sold in Ireland this year are either electric or hybrid and nearly a third of the drivers of electric drivers do not believe that the government will reach the target of a million cars before the year 2030 in Ireland.

This survey was carried out by Energia and the Irish Electric Vehicle Owners Association.

DD Motoring: Where are all our electric charging points gone? was last modified: August 10th, 2022 by Brian McDaid
FacebookTweetLinkedInPrint