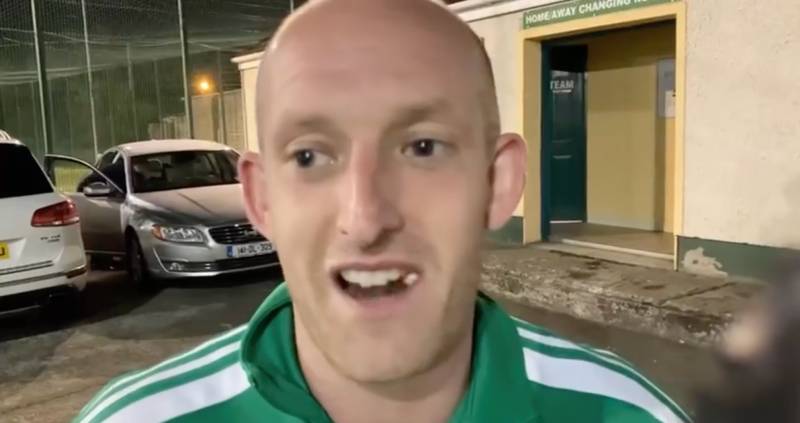 Watch: ‘Bonagee is the place to be’ says Michael Funston

Bonagee United midfielder Michael Funston has played on the feel good factor around the whole club at the moment, despite their loss to Shelbourne tonight.

The Intermediate side have had a brilliant year to date, winning a cup treble, while their Donegal League side won the Brian McCormick Cup. The ladies team also won the League while making it to the semi-final of the FAI Intermediate Cup.

He said: “It’s a massive night for the club, look at the facilities here, Bonagee did their homework, built their house on solid ground and tonight people came and seen it.

“They’ve numerous teams, i couldn’t even tell you how many teams they have look at the ladies team, they’re champions and got to the semi-final of the FAI (Intermediate) Cup, Bonagee is the place to be!”

Bonagee lost 4-0 tonight and was disappointed not to make it into half-time at 0-0, conceding in the 48th minute of the first half, which took a lot out of them against top competition.

Funston added: “The first goal right on half time pretty much killed us, it was a really good finish.

“You wanna get them in to half time and give them a good scare but unfortunately it was an easy second and the game got away from us.”

Funston was aggravated by the manor of the first goal, with a Bonagee defender down injured but referee Oliver Moran played on. Funston said he’s used to those decisions going against his sides when playing big clubs.

The former Finn Harps man said: “You don’t wanna say it for the night that’s in it but big teams are always well looked after, I’ve wore a blue jersey and I’ve seen it happen before and it happened again.

“The referee says he wasn’t down when the ball was thrown into play but he slid on the ground so at no point did he get up.

“But that aside, it was a really well taken goal.”

Watch: ‘Bonagee is the place to be’ says Michael Funston was last modified: August 26th, 2022 by Staff Writer
FacebookTweetLinkedInPrint