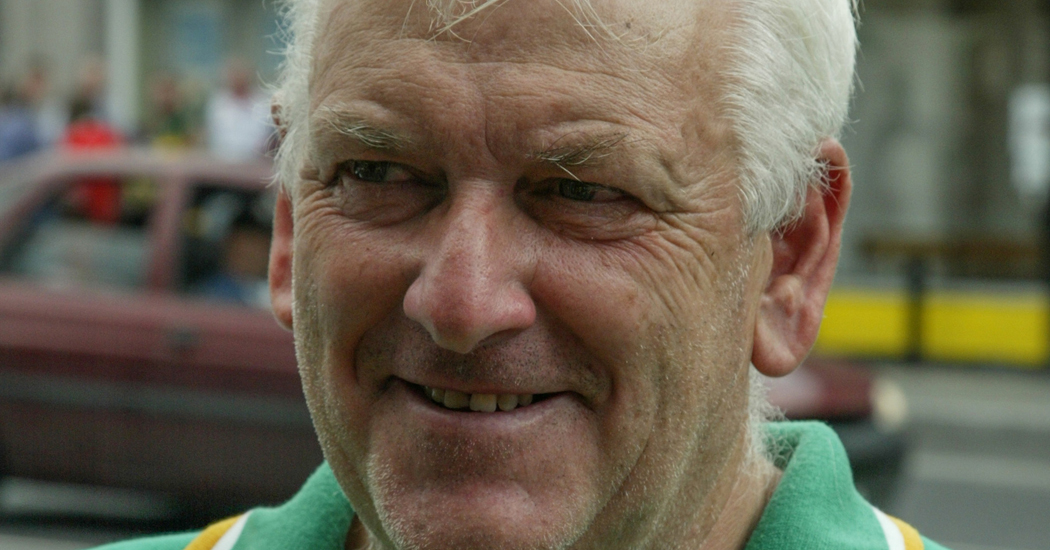 The train will pull out in time for Christmas as it has always. Rising to cross over the River Swilly in both directions. Some of its cargo will end up as far away as Melbourne, others will only go as far as McNeely Villas in the Oldtown both ending up in Christmas stockings, both transporting its townies at home and away to far off places in time or in distance.

Sadly this train that is the Letterkenny Christmas Annual is without its usual driver with the very sad news of the passing of its editor, the late Jim Lynch, who has kept this publication on its tracks for the last 4 decades. Letterkenny is still trying its best to come to terms with the fact that Jim’s familiar face will no longer be around in the Cathedral town.

The former school principal, Town Mayor and Cllr, Jim Lynch also was the editor of the town’s Christmas Annual. In that time it has become as much of a Letterkenny brand as Oatfield Sweets once was.

Last year was the 40th anniversary and over the years the annual could transport you back to the days growing up in the old Letterkenny. 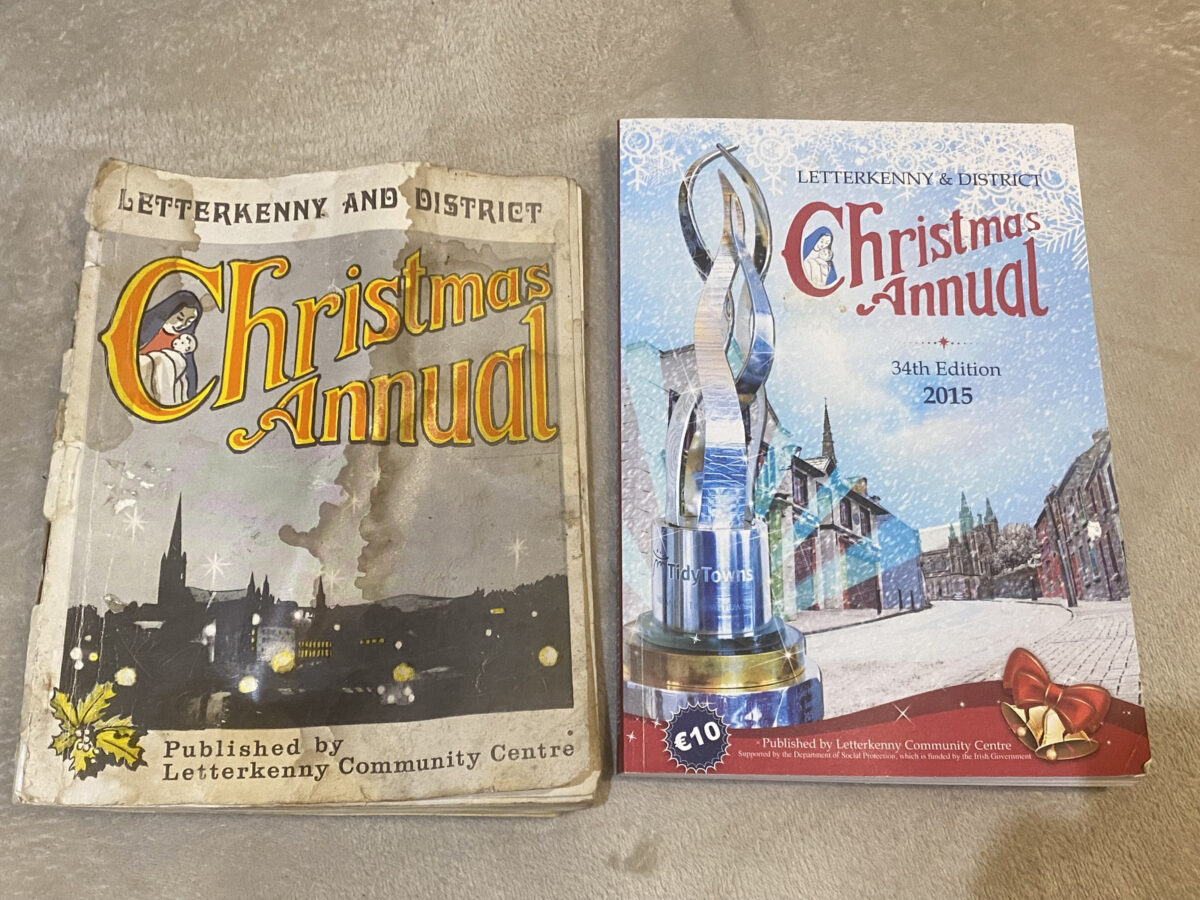 The first Christmas Annual that Jim Lynch edited in back 1985 pictured along side a more recent one. Photo Brian McDaid. 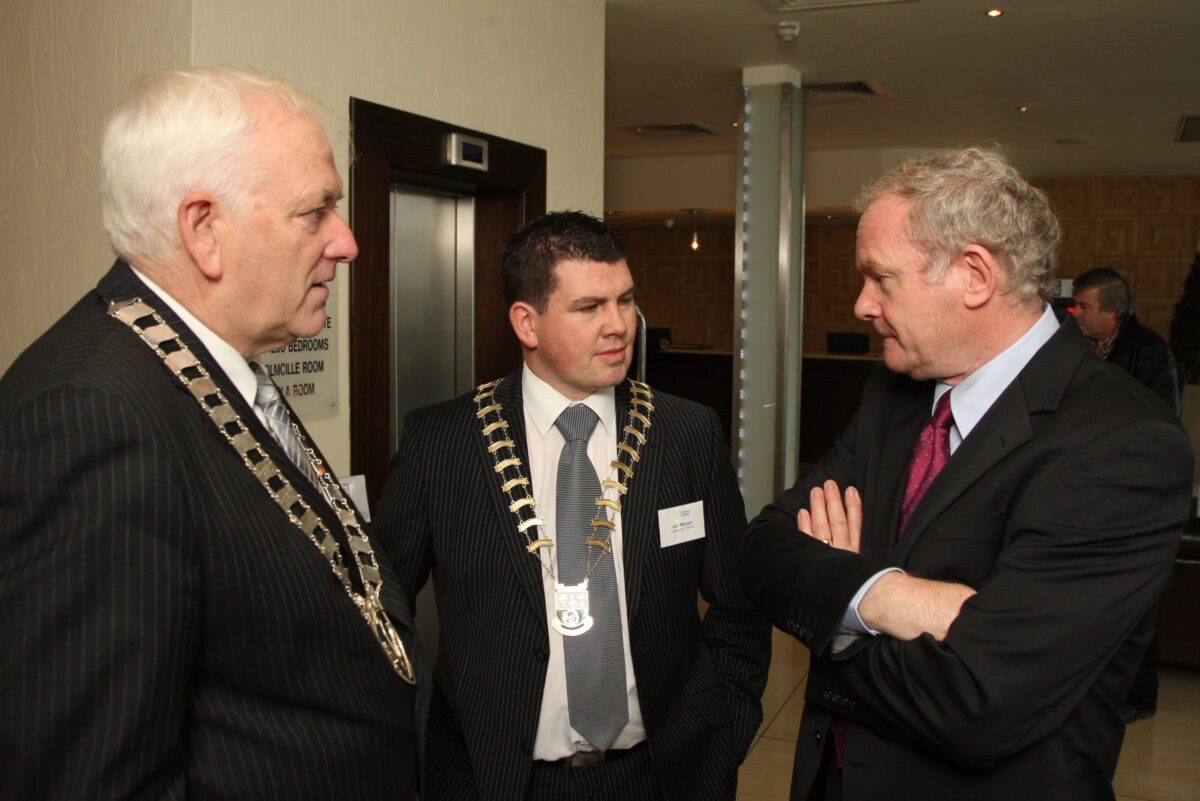 I only thought I valued these old Christmas annuals over the years but as I happened to flick through an old one from 1985 this week, now knowing that Jim has suddenly passed from this life. It makes these old Letterkenny Annuals all the more special. This year you might see Jim’s images or words about him in the 1st class carriage on the pages where we fondly remember those Letterkenny folk that have sadly passed before us. This year will be a very difficult time for all his family and the many friends that Jim Lynch got to know in the many decades that he proudly flew the Letterkenny Flag in his endless effort to keep or recognise our bit of local heritage.

Back in 1985, you can see first see the hand of Jim Lynch’s work in these earlier years. In his message from the editor. Jim Lynch N.T (national schoolteacher) he thanks the previous editor, Noel Slevin, and also thanks those who encouraged and supported him in taking on the job as Editor for the first time. As Editor he thanked production editor, Michael Mc Kenna, advertising Joe McCosker, project team Horace Friel, Edward Wicks, Jim Kelly, Gerry McGinley Donal O Gara, Jim Foley, Roddy Gayner, Pauric O Reilly, Charlie Grant, Liz Crumlish and Eleanor O Carroll.

Over the years working for the Donegal Democrat in Letterkenny since 1987, I would always get a call from Jim when I would meet him at Urban District Council meetings on the run into Christmas. Jim would always be on the lookout for old photos that might have appeared in the Democrat that year. With our head office in Ballyshannon and the original photos sent to print the paper in the days long before the digital era, the black and white negatives from that year would be searched over for Letterkenny photos to be reprinted for the Christmas deadline.

I can remember back in those days seeing stacks of pages sitting out on the stairs in Toyland where the Donegal Printing Company was located behind, (where the Voodoo or Gasworks is now located). Sean Curran and his staff juggled the print orders for calendars and the Christmas Annual but all managed to get out the door and to the shops in time for Christmas.

Even though I worked full time as a photographer for the Donegal Democrat and was lucky enough to have some of my photos used in national papers over the years, there was something special about having your photographs used in the Christmas annual. It was a beautiful keepsake for those of us that grew up

In Letterkenny. I have seen more photos of my late mother and her family over the years that I never would have seen had it not been for the Christmas Annual. 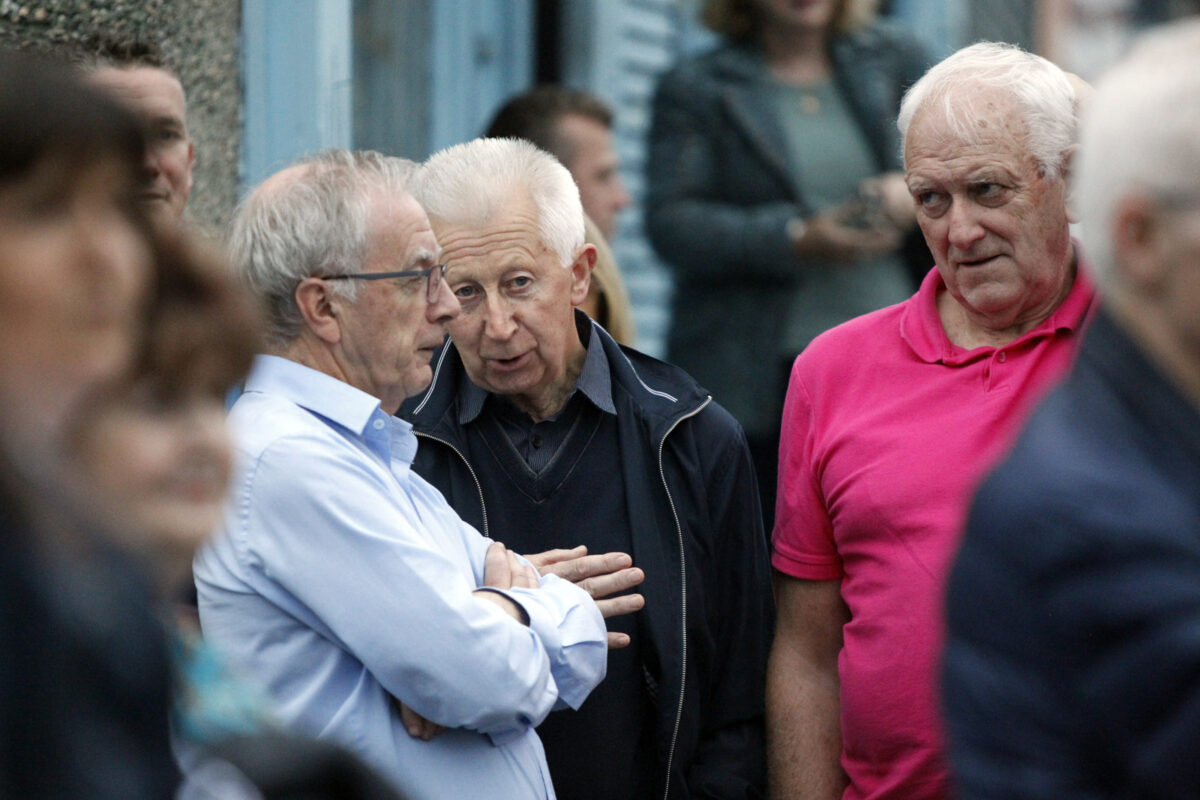 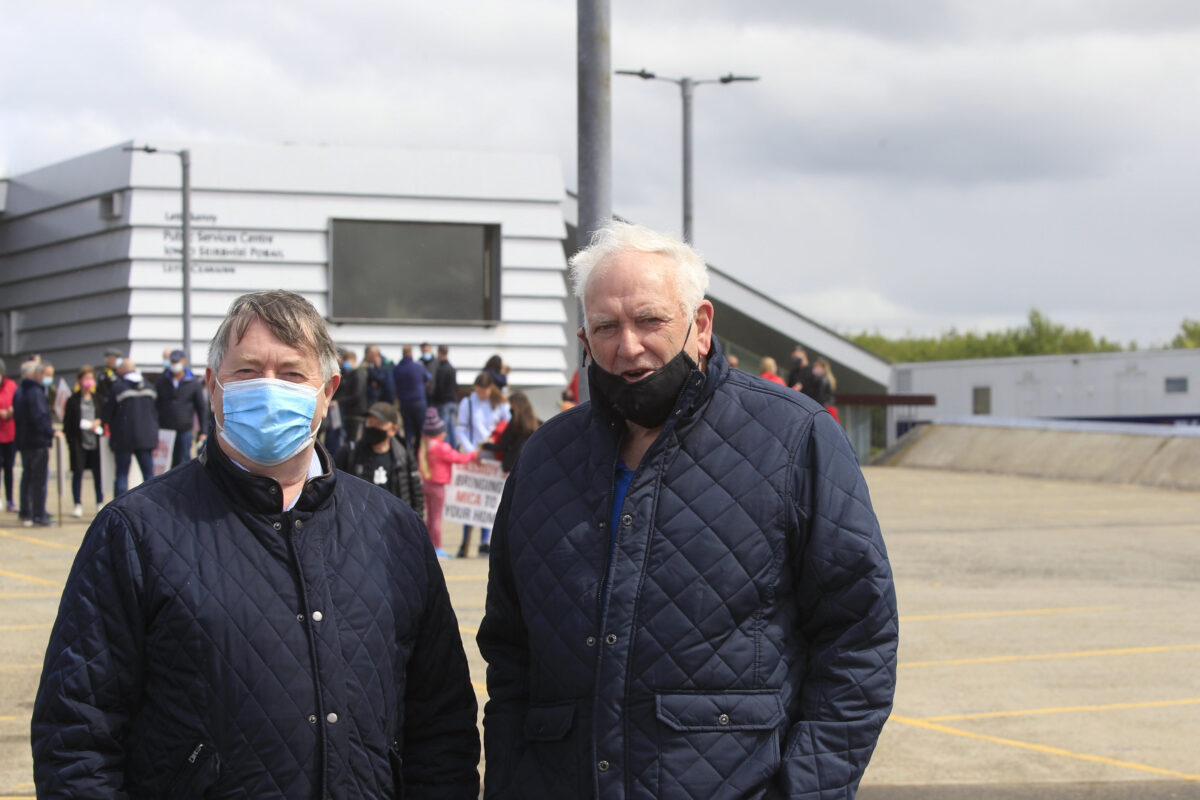 I remember one year Jim sent me around Letterkenny to get photos of different shops and buildings in Letterkenny. Places like Ma Houston’s shop at the foot of the church lane, the literary institute, Robinson Hall on the Port Road Dillon’s Supermarket were all on Jim’s list, making sure he recorded an image of them in the annual before they were demolished forever.

Over the years the great names of the people that worked behind the scenes with Jim to get all the articles and photos in set, scanned and ready for the Christmas deadline names have changed but their commitment was always there. Liam O’Donnell, manager at the Letterkenny Community Centre and staff members like Monica Grier and Loraine McGettigan to name just a few were always making sure Jim knew of all the content as it arrived by post, email or delivered by hand was processed into the system for that year’s annual. People like the late Horace Friel worked on Jim’s behalf to encourage people like myself to write the odd piece for the Christmas Annual. 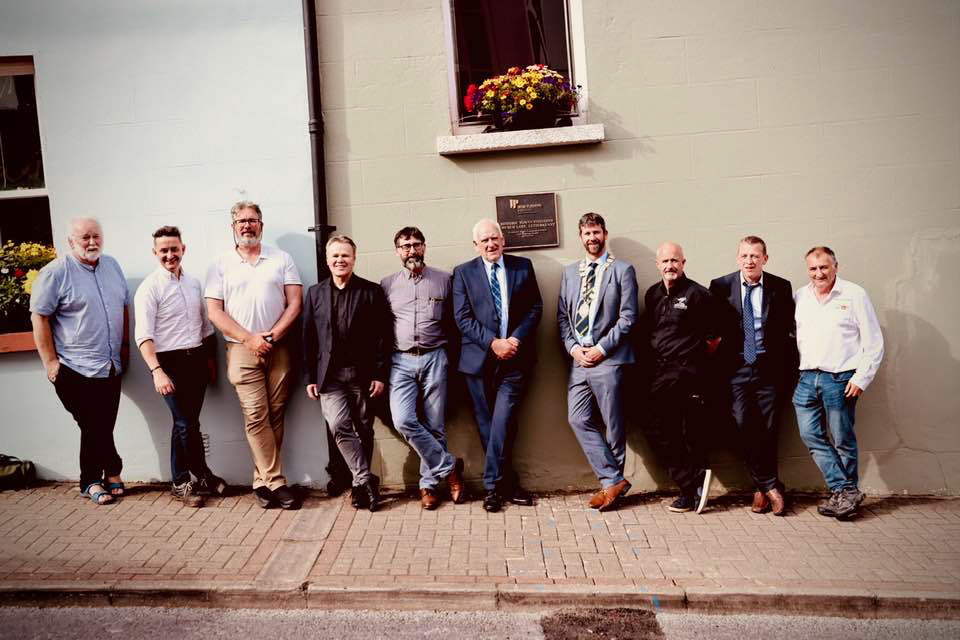 Jim Lynch pictured with his nephew Mayor Od Letterkenny Cllr Donal Kelly and and other guest on the Church Lane. Photo Brian McDaid. 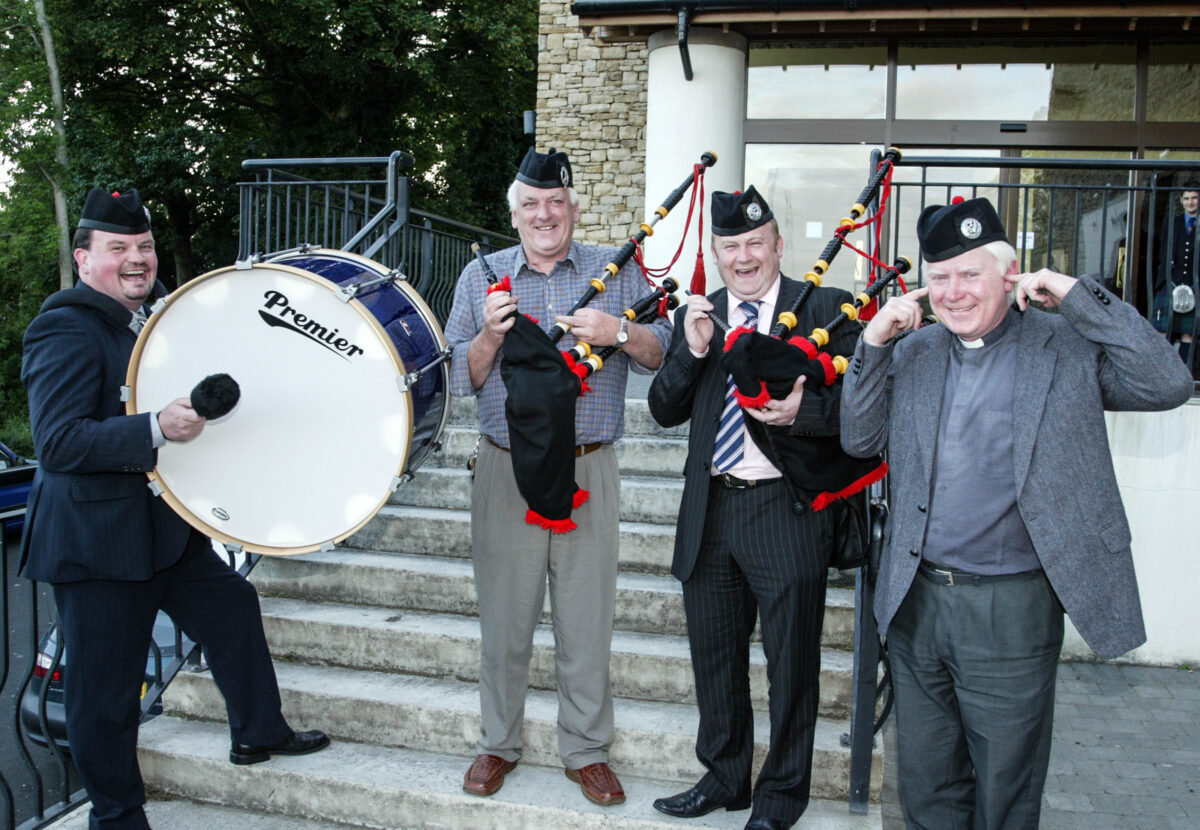 From the Archives: Local Cllrs. Ciaran Larkin, the late Jim Lynch and the late Dessie Larkin who were at the Press Conference on Tuesday night in Letterkenny as they drum up support for the great efforts that the Caledonia Pipe Band have done in securing the All Ireland Pipe Band Championship for the second Year. The event was held at the Town Park in Letterkenny. Photo Brian mc Daid

On the run into Christmas after all was sorted I would always get a phone call from Liam O’Donnell looking to do a wee photo to announce that the Christmas Annual was printed and on the streets. At some of these photo calls we had to stick a draft copy of the front cover onto last year’s annual for the purposes of the photocall and the smiles that I looked at this week of Jim, Liam and Loraine with the annual say it all knowing that they were still waiting for the annual to be printed when the newspapers were going to press.

Jim Lynch was involved with so many Letterkenny-generated promotions from the Reunion the Cathedral Quarter, and the old urban district council to name just a few, but it was the Christmas Annual that I will remember Jim the best from. In manys a long conversation with Jim he would be the first to admit that he never really got the hang of all this new social media and online stuff, as he called it. And for that reason that kinda makes the annual so special, never online, removed from Google searches, the annual was always a beautiful paper and ink record of the cathedral town.

I have included a wee slide show with a few photos of Jim over the years, including him as Mayor of Letterkenny, a position he was very proud of, in the slideshow Hugh Mc Clean is singing Letterkenny Town 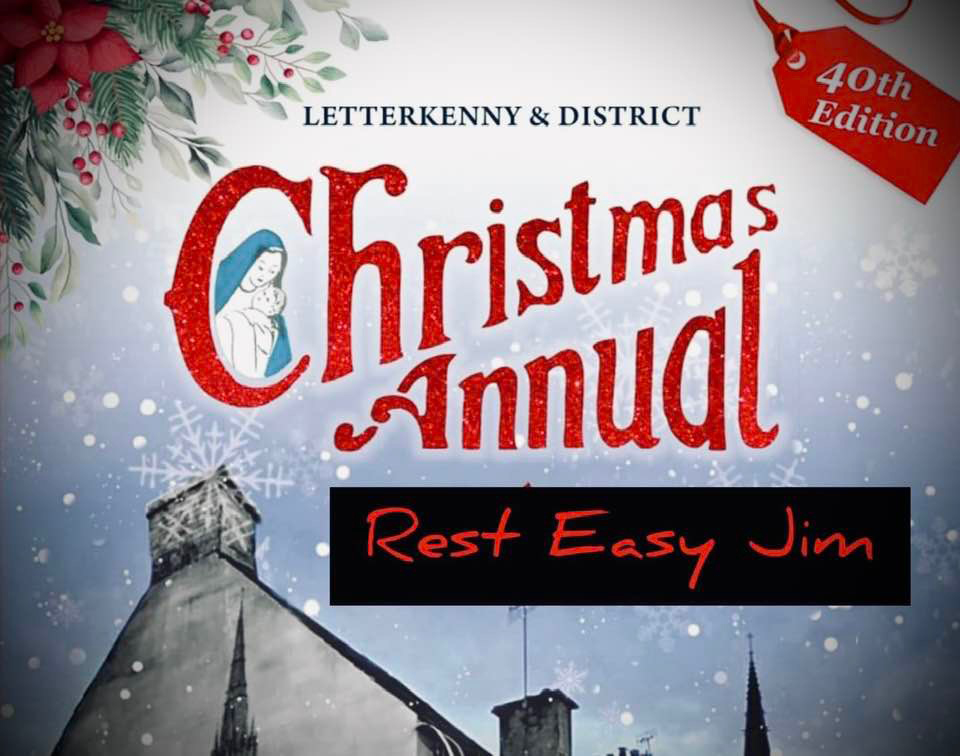 Made in Letterkenny: Remembering the treasured work of Jim Lynch was last modified: October 12th, 2022 by Brian McDaid
FacebookTweetLinkedInPrint