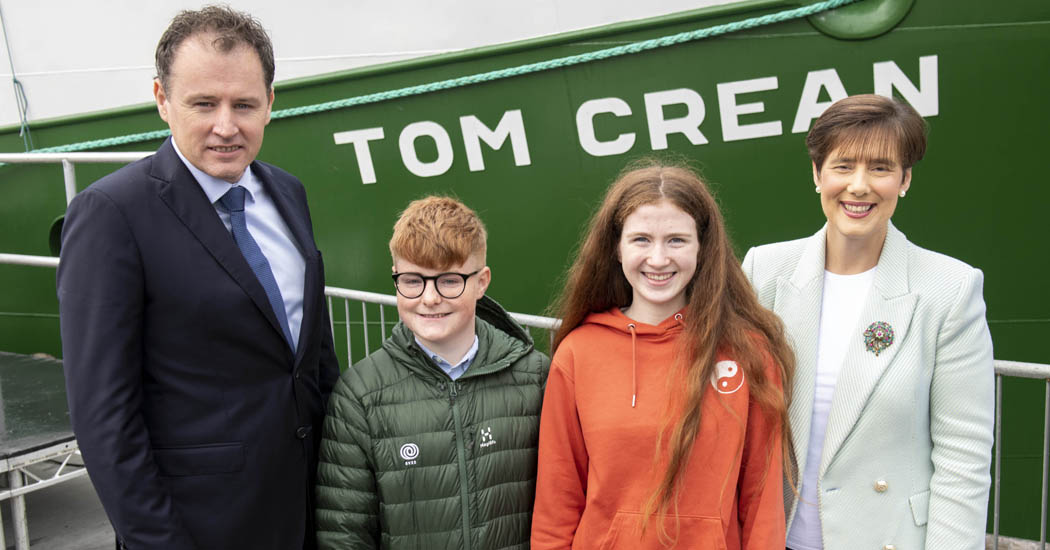 The RV Tom Crean is so-called thanks to Lochlann after he wrote to Marine Minister Charlie McConalogue with his bright idea last year.

Having studied the life story and the valiant exploits of Kerry native Crean in Antarctica, Lochlann thought that it was a good idea to have the explorer’s name enshrined on an important vessel. He took the opportunity to suggest his idea to the Minister during a persuasive writing school initiative. And it worked. Lochlann’s idea was praised as a fitting tribute to an extraordinary man.

Lochlann was invited as a special guest at the commissioning of the RV Tom Crean in Dingle Harbour earlier today. 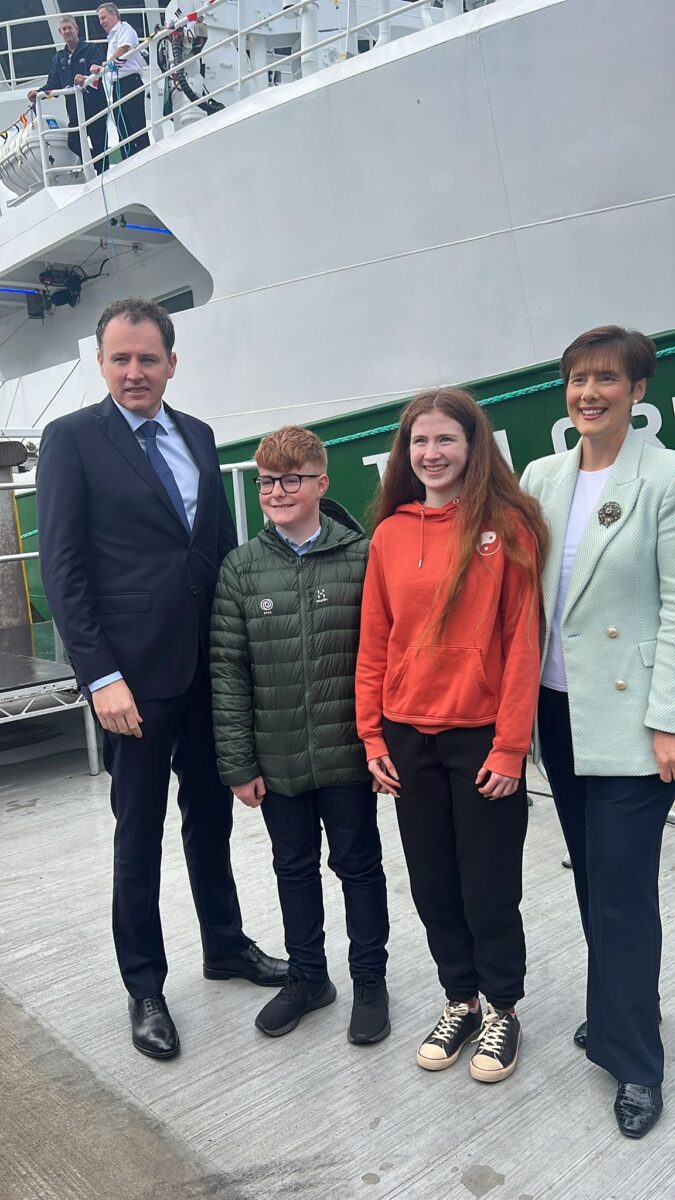 Ministers of Agriculture Food and the Marine, Charlie McConalogue T.D, Lachlann Scharf, 13, from Donegal, and Kate Heneghan, 14, from Kerry and Minister for Education, Norma Foley T.D

The vessel will immediately undertake essential scientific work, which will support many of the projects outlined in the Programme for Government; including fisheries assessments, offshore renewable energy, marine spatial planning, marine protected areas and addressing the challenges of climate change.

Minister Charlie McConalogue said: “The vessel is named after the legendary Tom Crean who encapsulated  our proud history of engagement in global  exploration.  I am delighted that we are joined today by his family descendants.  Naming this vessel for him celebrates Tom Crean’s life and achievements who I would like to think would himself approve of his illustrious name being associated with this vessel and more importantly with the work it is embarking upon. The RV Tom Crean will provide cutting-edge technology for scientists to study and support the sustainable development of Ireland’s valuable marine resource. It will play an important, exciting, and valuable role for future generations as we seek to improve our scientific understanding of our oceans”.

The Minister continued: “As an Island nation, we are on the frontier of the Atlantic, an ocean which drives our climate.  This new research vessel will immediately undertake essential scientific work, which will support many of the projects that this Government has prioritised and is urgently progressing, including fisheries assessments, offshore renewable energy, marine spatial planning, marine protected areas and addressing the challenges of climate change. The RV Tom Crean will provide us with a platform to gather the best scientific evidence to inform important  decisions on fisheries and ocean policy and the key environmental and economic challenges facing us today.”

The RV Tom Crean build and commissioning cost was €25 million.  It is a silent vessel, capable of operating throughout the Irish Exclusive Economic Zone (EEZ). It will be at sea for 300 operational days each year and the range of surveys will total 3000 scientists’ days a year.  Each survey will last up to 21 days and the vessel is designed to operate in the harsh sea conditions of the Atlantic.

The ship design incorporates the latest proven technologies to ensure that it operates as efficiently as possible, with reduced fuel consumption and operating procedures that minimise the vessel’s environmental impact and carbon footprint.