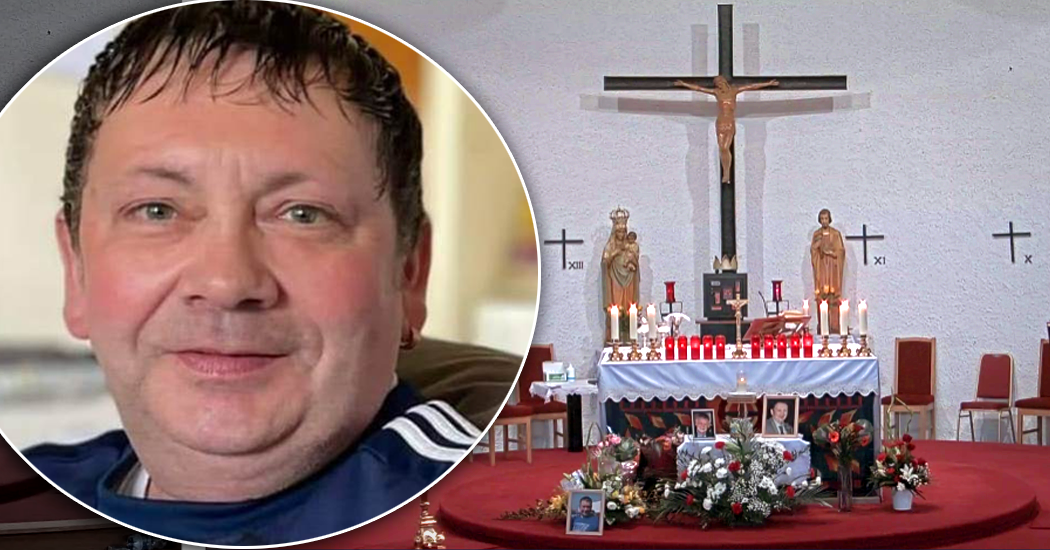 A loyal Celtic fan who was killed in last week’s horrific blast in Creeslough will always be remembered as a devoted carer for his mother, his funeral mass was told.

Martin McGill moved from his native Scotland in 2001 to care for his mother in the Donegal village.

The 49-year-old would often visit the Applegreen Service Station where he perished to get supplies for his dear mother.

Hundreds attended his funeral mass and were told that he will now be united with his father Joe in heaven.

Martin’s funeral cortege was led into St Michael’s chapel by a lone piper.

After the passing of his father Joe in February, Martin gained the strength to carry on through his grief by devoting himself to caring for his elderly mother, priest Fr John Joe Duffy told mourners.

“Our hope today is that he is now united with his dad, who he missed very much,” Fr Duffy said.

Fr Duffy said Martin was so much loved and so loving to his dearest family – his mother Mary, his sisters Caroline and Marie Louise, his brothers in law Iain and Matthew, his nephews, niece and his extended family.

“Martin had a most beautiful soul, a gentle soul, a kind person where you could see the goodness flowing out from him. It was effervescent,” Fr Duffy said.

In the wake of Friday’s tragic accident, Fr Duffy said that Martin’s qualities shone through in every person who helped.

Many of the mourners at today’s mass wore Celtic scarves while former All-Ireland winning Donegal manager Jim McGuinness also attended and some of his children also wore Celtic jerseys.

The offertory gifts symbolised what made Martin unique. A Celtic FC jersey was brought to the altar to represent his beloved football team.

A bottle of Lucozade was his hallmark around town and a loaf of bread symbolised the selfless way he was always running errands for others.

It was against the odds that Martin would not have been in the local shop on Friday, Fr Duffy said, reminding mourners that he would go five times a day to run errands for people.

His caring ways extended into his faith too, Fr Duffy said. “After each Sunday he would be in this church, he would be lighting candles, I think he lit more candles than I ever lit anyway in my life. I don’t think anyone could break Martin’s record.”

While he will be a huge loss to the Creeslough community, Martin will also be dearly missed in his hometown of Kirkintilloch outside Scotland.

Born in 1973, Martin went to St. Ninian’s High school before pursuing an apprenticeship as a joiner. He worked in McGavigans.

Outside of his duties, Martin loved cars, music and above all, Celtic.

Fr Duffy said that it would mean a lot to Martin to know that the Celtic FC foundation donated £10,000 to the Creeslough Community Support Fund. Martin would also be heartened by the players wearing black armbands for the game against German side RB Leipzig following the funeral later today.

Also in the congregation were some first responders at Friday’s incident, as well as some of those who were in the accident themselves.

Fr Duffy echoed the sympathies and prayerful support Pope Francis sent to the victims’ families and to the people of Creeslough, shared both in a letter to Bishop Alan McGuckian and directly to Downings Priest Eamonn McLaughlin in Rome.