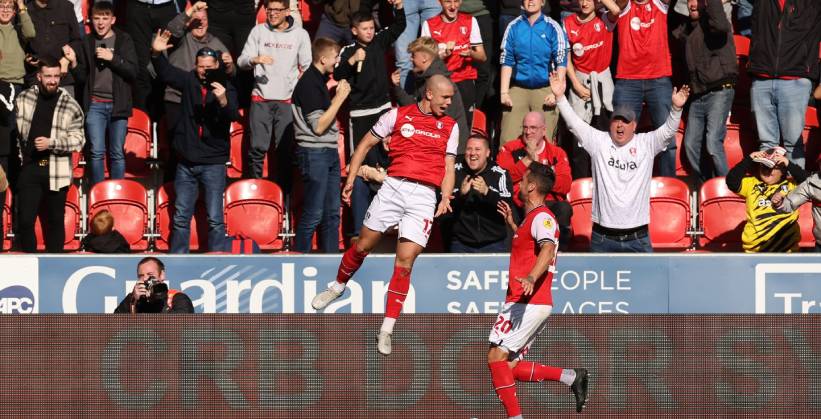 Georgie Kelly scores the winner for Rotherham in the Championship

Georgie Kelly scored the winner for Rotherham United in their 2-1 win over Huddersfield Town in the Championship today.

The Tooban man came on as a substitute in the 59th minute at 1-1 and quickly made it 2-1, two minutes after coming off the bench.

Kelly was the quickest to react to a stray ball in the box and he poked the ball home to score the winner half an hour from the end of the game.

It’s Kelly’s third goal since moving to England, after having a tough start with injuries.

He scored the deciding goal that secured Rotherham’s promotion to the Championship, beating Gillingham 2-0 on the last day of the season.

His first goal of this season came last mont, coming off the bench against Blackpool.

It was Kelly’s first minutes under new manager Matt Taylor and Taylor had praise for the Donegal man.

Taylor told the Rotherham Advisor: “I am still learning about Georgie. He seems to be a cult hero in these parts due to last season.

“In terms of the impact with his physicality, he is second to none. His goal was a big moment for us.

“He was in the right place at the right time and he did affect the game with his physicality.

“You could sense the atmosphere changing as he came on. We have got to keep working with him because he’s raw.”

Georgie Kelly scores the winner for Rotherham in the Championship was last modified: October 15th, 2022 by Dáire Bonnar
FacebookTweetLinkedInPrint