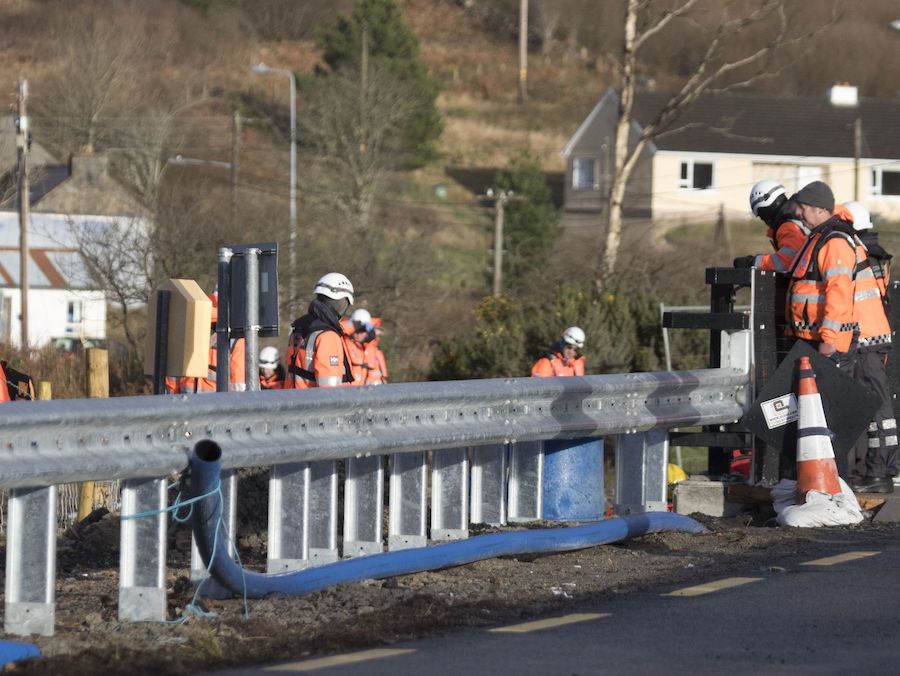 Lifelong colleague watched friend swept away after he fell from barge

A construction worker told how he watched a lifelong friend and colleague being swept away to his death after he fell from a barge while they were demolishing part of a bridge in Co Donegal.

Ian Smith, aged 65, was working on the Hydro Race Bridge in Gaoth Dobhair on January 15, 2018 when the tragedy happened.

Mr Smith was along with colleague Tony Dowd who were both employed by Co Fermanagh firm Dean Public Works.

An inquest into Mr Smith’s death was held at Letterkenny Courthouse by coroner Dr Denis McCauley.

Mr Dowd gave an account of the incident as he gave evidence to the inquest.

He told how both men had been on a tea-break mid-morning having started work at 8am demolishing concrete and railings which were due to be replaced by new road barriers on the N56.

Neither were wearing lifejackets which had been supplied and were not using harnesses as they placed two pontoons together to collect concrete debris on the pontoons or barge.

There was a two metre gap between Mr Dowd and as Mr Smith, who had worked for the company for 34 years, was jumping from one to another he lost his footing and fell into the water.

Mr Dowd said he heard his colleague calling to him “Tony, Tony” but he was quickly swept away under the bridge by a strong current.

Mr Dowd, who had worked with the company for 47 years was operating the crane removing the old concrete jumped up onto the bridge and flagged down a car and Gardai were called.

Garda Eugene Organ was one of the investigating Gardai who arrived on the scene and told of the operation to recover Mr Smith’s body from the water.

Members of Sheephaven Sub Aqua Club entered the water at 2.40pm and recovered the body of Mr Smith just a few minutes later only 100 metres from where he had fallen into the river.

Pathologist Filip Sokol told the coroner’s court that the victim, of Ederney, Co Fermanagh had died as a result of drowning.

Inspector Brian McHugh from the Health and Safety Authority outlined the safety procedures and plan which should have been followed at the site but which were not.

He said that to work safely on the project that five or six pontoons should have been used and the two men should have been given instructions on a safety plan by their company but were not.

He said that while there was lifejackets available they were not worn but also noted there was no ‘grab line’ in the event that the men fell into the water.

In effect, the men had been left to their own devices with regard to safety on the site, Mr McHugh added.

Coroner Dr McCauley agreed that death was due to drowning.

He also said a description of the death was in line with the findings of a previous case at Letterkenny Circuit Court on October 29th, 2021.

On that occasion the company pleaded guilty to Section 8(2)(e) contrary to Section 77(9)(a) of the Safety, Health and Welfare at Work Act 2005.

It admitted that it failed to provide a system of work that was planned, organised, performed, maintained and revised to be, so far as is reasonably practicable, safe and without risk to health for accessing, using or moving floating pontoons safely, resulting in the death of an employee.

Both Dr McCauley and Garda Sergeant Fergus McGrory conveyed their sympathies to the Smith family who were present in court.

Lifelong colleague watched friend swept away after he fell from barge was last modified: October 19th, 2022 by Staff Writer
FacebookTweetLinkedInPrint