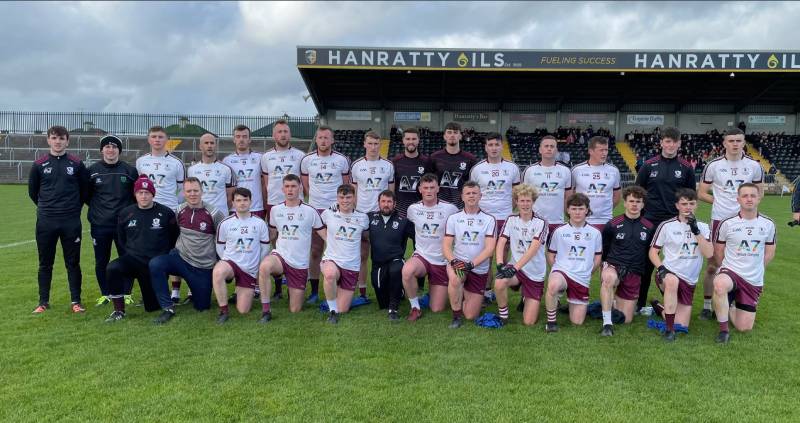 Letterkenny Gaels came from eight points down to overcome Armagh Champions Derrynoose in the quarter-final of the Ulster Junior Club Championship.

Gaels trailed 1-7 to 0-3 at half-time, with Conor McNally scoring 1-5 for the home side in Crossmaglen.

But it was a tale of two halves, helped by the strong breeze which gave the Donegal men the chance to come back in the second half.

And they did so with Shay Doherty and Conor McBrearty hitting three scores each, while a goal from substitute Brendan O’Brien had them in the lead for the first time in the 54th minute.

Diarmuid Ó’Cathail and Ronan Frain added to the scoreline and the Letterkenny men held on to win by a point at St. Oliver Plunkett Park.

Two frees from Conor McNally and a free from Patrick McGrane had Derrynoose up by three and McNally had a goal chance before he would get the green flag raised.

A quick turnover saw the ball come into McNally who fired towards goal, with Gaels ‘keeper Ryan Graham getting a strong hand but he couldn’t keep it out.

Conor McBrearty got the first score for the Donegal men but Conall McNally got his first point of the game.

McBrearty converted a free but three scores from Conor McNally, one from a free, had the Armagh men eight points up.

Brian Diver’s point before half-time left it 1-7 to 0-3 and Letterkenny Gaels with a mountain to climb in the second half, but with the breeze in their favour.

And the breeze looked to give a massive advantage as the Letterkenny men came out in the second half on the front foot, with three points in the opening three minutes.

McBrearty scored and then pointed again when winning the kick out, while again they won the kick out and Shay Doherty got his first score of the game.

McNally got another score for Derrynoose’s first score of the second half but Gaels continued to dominate as Diarmuid Ó’Cathail got a point while Jack Fox was black carded for the home side.

Two quick points from Shay Doherty, and another McBrearty free had the scoreline at 1-8 to 0-10 and just a point in it.

Dylan Mone pointed for Derrynoose while Ronan Frain got his first score of the game, but another McNally free, leaving him on 1-7 for the game made it a two point game.

But on the 54th minute, Letterkenny Gaels took the lead for the first time as Ronan Frain did brilliant running through before finding substitute Brendan O’Brien who fired the ball into the net, 1-11 to 1-10.

Frain then pointed again as Ó’Cathail got his second score of the game, taking his point with a goal chance on, as Gaels went three points clear in the last minute of normal time.

McNally pointed again from a free but Derrynoose would go down to 14 men as Pearse Lennon was given a second yellow.

McNally scored one last free to bring his tally to 1-9 for the game but the game would end on 1-13 to 1-12 as Letterkenny Gaels would come back to win their first Ulster Club Championship match.

Dougie Corbett’s team will now face Stewartstown from Tyrone in the semi-final.